Taste 30-plus heirloom tomato varieties at Windrose Farm on Sept. 22

For more information about the Windrose Farm Heirloom Tomato Festival presented in conjunction with FARMstead ED, go to farmsteaded.com or call (805) 226-2081.

Windrose Farm's annual Tomato Festival love-in is slated for Sept. 22 and 23 at the Paso Robles farm, located at 5750 El Pharo Road. If you've never been to this unique patch of land, you're missing out on (at least what I believe to be) heaven on earth. Not only is the farm beautiful, it's healthy. Nourished by the ghost of an ancient creek, these biodynamically farmed fields have been feeding your favorite farm-to-table restaurants for years because farmers Bill and Barbara Spencer have been feeding the land, naturally. 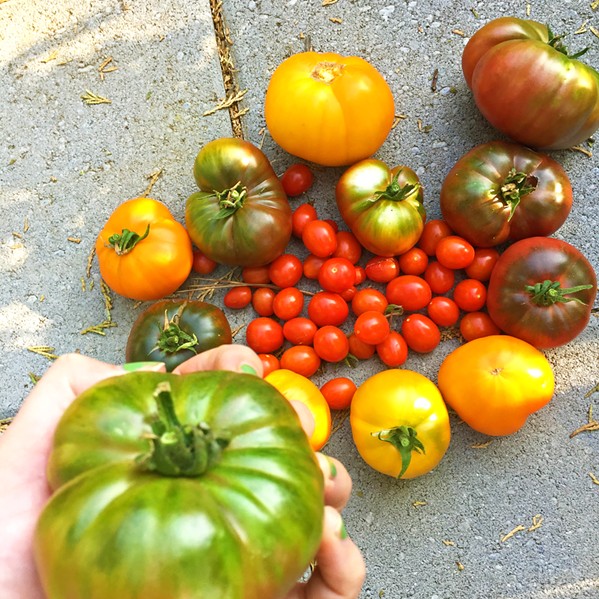 Explore greenhouses and wave hello to the many sheep. Hear birds chirping overhead. Camp in the apple orchard. And, as it is September, get your fill of juicy vine-ripened heirloom tomatoes of all colors and flavors. Saturday, Sept. 22, is the festival free-for-all: Hang out from 2 to 5 p.m., taste more than 30 varieties of tomatoes, and stay for the local chefs and purveyors, who have turned Windrose Farm tomatoes and produce into the freshest early fall bites.

The FARMstead ED Pop-up Marketplace and Windrose Farm Stand will be open and selling much of the flavorful fare and products you're grazing on, by the way. If it's not already sold out, look into the Sunday, Sept. 22, dinner at the farm, featuring a tour and food prepared by Chefs Roxana Jullapat and Daniel Mattern from East Hollywood's Friends & Family, David Wilcox of Journeymen (now Hail Mary Pizza) in LA, and local Chef Tim Veatch of Wayward Bread Co. in Los Osos.

If you can't attend the festival this year, you can still grab a knife and slice your own. Sprinkle on the sea salt and fresh cracked pepper; maybe add a few sprigs of basil. Get comfortable (and grab a napkin). Let these words, ripped from the pages of my own garden journal, fill your belly with the last rays of summer sun.

After a few years of growing dozens of heirloom tomato plants, I can say two things without a doubt. One, they are by far the most rewarding thing I will ever grow, and two, they are great conversationalists.

Yes, I've started talking to them. And they've been talking to me. Maybe this is the result of the writer's life (devoid of human contact and short on showers) or maybe it's just me growing into the inevitable earth mama every punk rock teen is destined to become—because, let's face it, life should be full of moments of poetic justice that make our parents chuckle.

Anyway, the 10 or so plants I bought at the Cal Poly plant sale this year are chattering at me. If you grow heirlooms you might know what I'm talking about. Like dogs or spouses, you begin to take on each other's characteristics. And, in the throes of September, I—and my plants—are exhausted yet fruitful.

The sun golds and cherry varieties have released most of their promise, but the later ripening varieties are still pumping out all the juiciness I'd wanted to manifest in January, when my journal was new and the horizon looked bright.

In winter, my dreams started taking shape; quietly at first, as I turned my last batch of compost and smoothed it over the garden. I planted my specific hopes in the spring, greedy with a million intentions. I used the water saved from the winter, sitting in a giant drum under the plum tree, knowing I only had so much to give, so much to delegate. There are only 24 hours in a day. Still I wrestled with my ego. Both in my life and my kitchen, I wanted all the things: tomato compotes, salsas, and sliced chunks glistening with olive oil and vinegar, pizzas, sloppy grilled cheese sandwiches, gazpacho, and the cover of Bon Appetite magazine.

At our peak, most of these fantasies actually did come to fruition (save for the magazine spread), but as summer came and went, I had to celebrate what ripened and let go of what could not. I lost some of these dreams to rot, some to chickens, and some stayed green on the vine till they shriveled.

What had started out as a galaxy of tiny yellow flowers—of endless possibilities—had collided with reality. Of course, this led to some big surprises (and some monster Cherokee purples).

The end of summer, and the beginning of fall, is my favorite time of year. I still have a nice manageable harvest of tomatoes a few times a week, but I'm savoring them more, knowing it's the end of an era.

I'm also looking at the horizon, checking the soil, ready to cut back the old dried-up growth with abandon. Like the tomatoes, my roots have grown out, my stamina for sun and fun and productivity is nearing a cliff. I'm more inclined to make a moody tomato sauce that bubbles for hours, even days, than a breezy heirloom-watermelon salad with quinoa.

As I look out over the plants in the chilly September morning light, vines still green but showing a tinge of gold, I know that I've produced all that I possibly could have, and let go of what died along the way.

I did not do this in spite of those struggles, but because of it. Every loss only added to the final bounty, diverting precious water to the fruit that truly needed nourishment. What we've produced has been delicious. Δ

Hayley Thomas Cain is sitting in the backyard, scribbling. She can be reached at hthomas@newtimesslo.com.