Tea turns over a new leaf in Grover Beach

Forget the processed powdered tea youâ€™ve downed with a little cream and sugar. Now aficionados can indulge their taste for freshly picked teas from the Fujian Mountains of China, thanks to the Dragon Pearl Tea Company, billed as â€œthe only American tea company buying directly from the farm.â€? 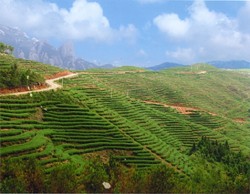 # â€œThe biggest advantage is the freshness of our tea,â€? says Dave Dahl, Dragon Pearl Tea Company co-founder. â€œFactory farm teas contain pesticides and impurities that ours doesnâ€™t, because it is raised in the mountains away from industry.â€?

For Dahl, Judah Sanders, and Hong Xiang, the co-founders of the new Grover Beach tea import company, exposure to the intricate flavors of fresh mountain-grown teas during numerous excursions to China changed their lives forever. â€œIn 2004, I was in Hong Kong,â€? Dahl says. â€œI flipped out when I tried the tea. I brought some back and my tea drinking friends also flipped out.â€? Dahl searched unsuccessfully to find comparable quality Chinese tea in America, and then, along with his partners, had the good sense to convert their obsession into a business.

Then Xiang, through his family connections, introduced his partners to an organic tea co-op in Fujian. On six separate occasions, the three founders traveled to mainland China, Taiwan, and Hong Kong, tasting teas and inspecting farms. Upon arrival at the warehouse, each batch of tea is tested for impurities and tasted for flavor. Last week, the partners rejected a shipment of oolong tea. â€œIt was flat and flavorless,â€? Sanders says. â€œIt was not the batch we specified.â€?

One of the biggest weapons in the tea companyâ€™s campaign to make a splash with Central Coast lovers of fine food and drink is planned tastingsâ€”in small black porcelain cupsâ€”to be held weekly at local markets. â€œIt is fun to learn the different tea flavors,â€? Sanders says.

The fledgling company currently offers five tempting teas including varieties of white, green, and black tea. White tea is hand picked when the leaves are about three days old. â€œWhite tea is the purest form of green tea,â€? Sanders says. â€œIt is not processed and has the greatest health properties and the lowest amount of caffeine, though it is labor intensive.â€? Â

You have probably heard that tea is good for you. A number of recent studies promote the potential health benefits of both black and green tea. Researchers claim that drinking tea substantially reduces the risk of heart disease and helps prevent the development of several types of cancer. The anti-oxidants delivered through tea drinking is billed as 100 times greater than the punch of vitamin C.

For fledgling tea drinkers, Dahl offers some advice: â€œA purist doesnâ€™t use a tea bag. They steep their tea in porcelain or glass, because it doesnâ€™t taint the flavor. In China the first steeping is poured out, the second steeping is more powerful, unlike powdered tea.â€?