Last year’s Tedeschi Trucks Band show at Vina Robles Amphitheatre ranked among my favorites, filled with soulful blues, incredible guitars, blazing horns, and great vocals from Susan Tedeschi and opener Jackie Greene, who joined forces on stage near the end of the concert.

This Friday, June 5, the band is back at Vina Robles Amphitheatre (visit vinaroblesamphitheatre.com for ticket info) with Sharon Jones and the Dap Kings and Doyle Bramhall II opening in what’s being billed as the Wheels of Summer Tour that will take them throughout the U.S., playing 32 shows now through Aug. 4.

According to Derek Trucks, we should expect more collaboration between his band and this year’s opener Sharon Jones. 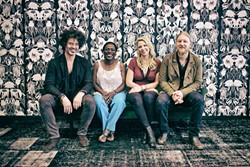 “We haven’t done any shows with both bands yet, but Sharon came up to our Central Park show a while ago and it was a pretty amazing hang,” Trucks said. “She got up for a couple tunes and she and Susan sound great together. I think we’ll have a lot of collaboration, and it’ll be one of those tours that as it goes on, different ideas will be flowing. We have 11 members, and I think Sharon has 10, so there’re a lot of possibilities.”

If you’re now wishing this weekend’s Vina show wasn’t their very first on the tour, never fear. Trucks said early shows will offer their own rewards.

“That first spark as we get to know each other musically can be magic on stage for the musicians. You’re up there and this thing just happens, and everyone on stage is like, ‘Oh shit!’”

Both Trucks and Tedeschi were veteran performers with their own successful groups (Trucks’ band earned a Grammy for Best Contemporary Blues Album), but after they put their solo endeavors on hiatus and teamed up, their debut album, Revelator, won the 2012 Grammy for Best Blues Album. Does that kind of early success mess with their heads? I mean, when your first album wins a Grammy, where do you go from there?

“You know, honestly for us, that was never the intention. I mean, you don’t take those things lightly. It’s a big deal, but you can’t judge your worth by how many trophies you have. I’m more interested in what the band can be, what it can do,” Trucks said. “That first record, I thought it had amazing songs and the way it felt and sounded—I was proud of it—but I thought [follow-up studio record] Made Up Mind was better, and this new one we’re working on now, I think it’s even better than the first two. If we thought about career success and accolades as what was important, for me personally and I think for the group, that’d feel kind of like bullshit. You can’t control other people’s perceptions of the music. You just have to feel good about the music you make and do the work and let that propel the band.”

Trucks did admit their new record is almost finished, and he said two or three of the new songs might be featured during the show, but he said they’re keeping most of the new songs out of rotation until after the album is released.

“In this day and age, if you play all the new tunes, they’re already out there. We really want to, but after one show they’re up on YouTube.”

Trucks said they plan to mix and master after the tour ends in August, so expect the new record sometime in fall.

The Live Oak Music Festival has become my family’s traditional way to usher in summer, and now just three weeks away, I can almost taste it! Held every year over Father’s Day weekend—this year June 19 through June 21—the three-day event happens at Live Oak Camp off Highway 154 about 80 minutes south of SLO Town (info at liveoakfest.org). It’s great for camping, or day passes are available if you just want to go check it out. In addition to all the great music, the food vendors are amazing, there are tons of activities for all ages, lots of cool artsy stuff to buy, and the setting is gorgeous.

Over the next three weeks, New Times will be running an interview with one of the performers, this week with Southern fireball Nikki Hill. The roots rocker and old school R&B shouter began her career after she met and eventually married guitarist Matt Hill, who with Ed Strohsahl (bass) and Joe Meyer (drums, percussion) complete her quartet. 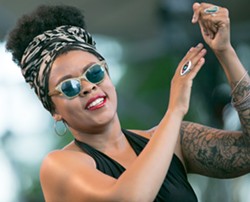 So, how did she meet her husband?

“We both grew up on North Carolina, and we actually met way before we started dating,” Hill revealed. “Some mutual friends introduced us because we were both huge music fans. I spent most of my free time going to see live music, and a few friends thought we should meet since we were the same age and had similar interests. At the time, he had a band that played ’50s rock ’n’ roll and Chicago blues. We became really good friends and we’d go see shows together, but it didn’t blossom into a romance until a few years later. When we first met, we were both dating other people. Early on we tried to go on an informal date, but I thought he was so immature and I wasn’t interested in dating a musician.”

She was deeply interested in music, weaned on MTV, trained by singing in her church, drawn to the raw and explosive rock of AC/DC, the zany energy of Little Richard, and fully immersed in the local punk rock scene where she saw acts like Flat Duo Jets that inspired the White Stripes. When she finally decided to make her own foray into the music scene, cultivating a style and persona was part and parcel of her early brand of rock. From her clothes to her stage presence to her vocal style, Nikki Hill is a blast from the past. In fact, every photo I’ve seen of her online, she looks amazing!

“That’s so sweet,” she said with her Southern drawl. “I’ve always really been into vintage style. I think when you’re younger, you’re always trying to find ways to individualize your style, and to keep my mom from buying my clothes I’d scour thrift shops. If I’m not collecting records, I’m collecting clothes and accessories.”

Though she doesn’t necessarily sound like these performers, Hill has the same sort of raw energy as Etta James and Tina Turner. Who are her musical heroes?

“It’s hard not to think Etta James and Tina Turner—I definitely admire their vocal style and stage presence, and I really love Otis Redding as far as dynamic stage persona and vocals. I mean, he killed all the ballads and could also do really high-energy tunes. I love to see him in full-on rock mode. And I’m a fan of AC/DC. I love watching videos of Bon Scott on stage and James Brown. There’s no reason not to have fun when you’re up there.”

As the heyday of SLO Brew draws to a close, a cadre of local bands under the aegis of Good Medicine Presents bids the venue adieu this Thursday, June 4 (7 p.m.; 21-and-older; $10). Punk act Magazine Dirty, twang rockers Dead Volts, roots rockers American Dirt, and more will play one last time at the Garden Street location. “The Garden Street venue has always been particularly important to SLO County musicians who have filled out both audiences and bills over the years,” said Jon Bartel of American Dirt. “SLO Brew has always understood the importance of hosting local acts as well as touring groups.” Rumor has it that Todd and Korie Newman, who ran SLO Brew the past nine years but aren’t involved in its purported move to Higuera Street, are working on a new venue to carry on the legacy. More on that as it develops. Visit slobrewingco.com for other Good Medicine Presents shows at SLO Brew this week, like Supersuckers playing Wednesday, June 10!

Texas soul man Joe Koenig & The Homewreckers play a free show at Tooth & Nail winery this Friday, June 5, from 5 to 9 p.m. Koenig, who hails from Texas but now calls the Central Coast home, is an award-winning singer-songwriter whose emotionally resonant songs will linger in your mind. This is also a Good Medicine Presents show!

The DANA Cultural Center invites the community to an evening with the Cuesta Jazz Faculty Quartet on Saturday, June 6 (doors at 4:30 p.m.; show at 5; call 929-5679 for tickets or visit danaadobe.org). 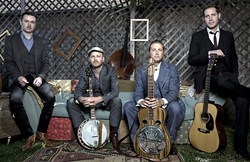 LA-based string band The Get Down Boys play the Red Barn Community Music Series this Saturday, June 6 (potluck at 5 p.m.; show at 6; tickets $15 at the door). The high-energy traditional and original bluegrass act is “known for their carefully crafted songs, floor-shaking rhythms, and unmistakable harmonies.”