While many high-school drama departments struggle to create performance spaces out of storage closets and unwanted classrooms, the drama students at Arroyo Grande High School routinely step onto a stage that has supported first-class entertainers from around the world. The prestige and professionalism the Clark Center lends to the high school’s productions is part of the reason that the drama department’s annual end-of-the-year New Play Festival is such a hit with audiences and participants alike. And in an educational system that frequently devalues art in favor of numbers and scientific theories, drama teacher Billy Houck takes nothing for granted. 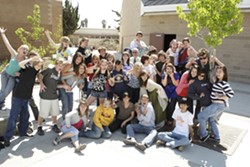 “You would never consider playing football without a football field,” said Houck. “You wouldn’t have a football team that plays in the parking lot. You just wouldn’t do that. But I know an awful lot of theaters that are carved out of an old multi-purpose room. It’s really validating for us to have the Clark Center to work with and it shows these kids that the arts are important.”

The festival was started more than 10 years ago, but every year the students produce a unique lineup of original plays. And this year’s show, which takes place June 9 at 7:30 p.m. should be no different. Even Houck, who has been teaching theater at the high school for 27 years, is constantly surprised by what they come up with.

“I never really know what the New Play Festival is going to be like,” he said. “We just tell the kids to write what’s on their mind and they do.”

An estimated 45 students will be producing the festival, some with multiple roles as writers, directors, actors, and set designers. In order to participate in the handful of productions the theater department stages each year, students enroll in a two-hour block class titled Performance Studies and Theater Production. This school year’s past productions have included Reviving Ophelia, The Importance of Being Earnest, A Piece of My Heart, and The Tempest, among others.

But for the festival, students put pen to paper, or hand to keyboard, to write musicals, monologues, and plays of all genres. The entire class votes to determine which plays they would like to stage; this year, students submitted 13 plays, eight of which the class selected for the festival.

This year’s budding talent—who will be competing for cash prizes in the amount of $150, $100, and $50, donated by Stolen Fire—includes Cassie Jacobs and Alycia Drube (The Lift), AnnaKarina DeLaTorre-Fennell (A Generation of Blind Dates and Is it?), Ben Aijian (The Painting), Danielle Ames (A Play), Chris Wirz (Stalking Kristie), Sara Powers (Always Painful), and Lauren Hickok (Coffee Shop).

Unfortunately for the writers, during the course of the festival they are not allowed to participate in the production of their play. They are instead assigned a role directing or acting in another writer’s play. Senior AnnaKarina DeLaTorre-Fennell says that it’s difficult watching another student direct her plays because sometimes the student takes the production in an unexpected direction. But after one of her plays tied for a win in last year’s festival, DeLaTorre-Fennell is an old hand at trusting her fellow students.

This year, two of the four plays that DeLaTorre-Fennell submitted were selected. Both are two-actor plays, just a few minutes in length. She also wrote a morality play that the AP German class will perform as part of the festival. Each year the class stages a play, though it isn’t part of the competition. The young playwright selected a morality play, in which the devil and angels argue, because it was something that audience members who aren’t fluent in German could understand.

DeLaTorre-Fennell’s plays aren’t exceptionally short, though they average around five minutes each. But she is the only student playwright who selected two-actor plays; the other pieces range from four to six cast members.

The student responsible for one of the longer works is junior Sara Powers, who wrote a musical. She wrote her first play last year as a sophomore, something she might not have been interested in were it not for the New Play Festival.

“I was in theater freshman year and I just thought ‘here are people getting to express themselves and I always have ideas that I’d like to see come alive.’”

Powers knew that no one else was working on a musical, and figured the unexpected genre might give her a competitive edge. And the subject of her play—AP (advanced placement) testing—made for superb musical fare. She wrote individual songs for each character—the proctor, the two slackers, and the overachiever. In one song, a parody of “Ice, Ice Baby,” her lyrics are, “Rollin’ with my 5.0 with a bumper sticker that even says so.” She also played with the lyrics to Daniel Powter’s “Bad Day,” a song that became nauseatingly popular when it was featured on a season of American Idol.

Unfortunately for Powers, she was so busy actually taking the AP exams that she barely managed to write about the experience within the entry deadline. Consequentially, specific details like stage directions will be left to Danielle Ames, the student directing Always Painful. Ironically, Powers is performing in Ames’ play, titled A Play, in the festival. But Powers insists that releasing control of her play is a natural and important aspect of the process.

“I feel like I’m pretty loose as a writer,” she explained. “Even though it’s a process about my creativity, it’s also about the process of creativity for the director and the actors.”