Brandon Wall, Templeton Fire and Emergency Services' only full-time fire captain, expressed concerns about the department's ability to provide services to the community of 7,674 residents on Dec. 18.

"We're missing calls, and I'm the only full-time guy here in the fire department. We are getting worn out and something needs to change," Wall told Templeton Community Services District (CSD) board members. 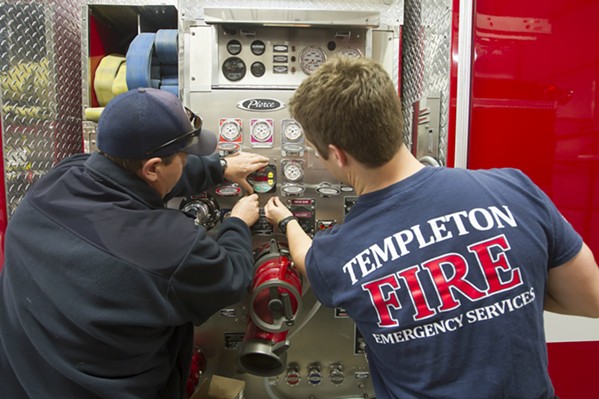 During the Dec. 18 meeting, the CSD board discussed a possible special parcel tax or special benefit assessment to fill the funding gap for its fire department.

In August, the board directed staff to obtain proposals for consulting services to assist the district with a special parcel tax for fire and emergency services. The district hired Probolsky Research to conduct a live-interviewer telephone voter and property owner survey from Nov. 15 to Nov. 29. A total of 200 voters were surveyed.

About 74 percent of participants said they would likely vote in favor of a special parcel tax to fund their department, if it would improve emergency response times and provide 24/7 coverage rather than the current nine hours per day.

The board unanimously voted to direct its staff to look into the process of holding a special election for the special parcel tax. In order to pass, the tax would need a two-thirds majority vote.

Fire Chief Bill White told New Times that the department is very encouraged by the survey and optimistic about moving forward with a potential tax.

"We're very excited about moving forward because we are to the point where we don't have the staffing that we need at night sometimes, and as the fire chief my main goal is the safety of the community," White said. "If I can't provide that safety, then we need to look elsewhere for the community to be safe. ... If it's not us then we need to look at consolidating, or just outright doing what happened in Cayucos where we divest our fire service."

The department is currently funded on an antiquated property tax allocation. The tax on property owners in Templeton is 8.4 cents of every dollar collected, which goes toward the CSD budget. The fire budget is currently $800,000, with one full-time fire captain.