Templeton Hills Beef offers a healthier alternative for people who care about the quality and origin of their food. They raise all-natural, grass-fed, and grass-finished beef from cattle that graze on the grasslands of the Central Coast. You can order 10- to 25-pound frozen and individually vacuum-sealed packages of grass-fed beef samplers, individual cuts, and sides at templetonhillsbeef.com. Call (805) 237-8114 for free delivery in North SLO County. Ask about the Beef Club Spring Special. It's not on the website, but the thrice-yearly 16-pound beef assortment is a great deal at $175. Templeton Hills provides overnight shipping anywhere in California, as well as parts of Nevada, Arizona, and New Mexico (for an additional cost).

The cattle of Templeton Hills Beef ranches take their sweet time eating the long, sun-kissed grasses of the hilly terrain, stopping on occasion for shade and water under some oaks with a few of their herd and some retired horses. All is silent in the warm air—all but the occasional lowing.

On a recent summer day, I took a truck ride with Will Woolley and Alton Emery, owners of Templeton Hills Beef, to check their livestock on one of their 300-acre ranches. Sometimes they travel by horseback, but this day we drove up the canyon in Woolley's truck. We went on a while before spotting a few cows and a big, black mother cow with her calf. She hustled a bit to move off the dirt path as Woolley's truck passed by.

This herd has never eaten a handful of grain in their lifetime, and that's a good thing. 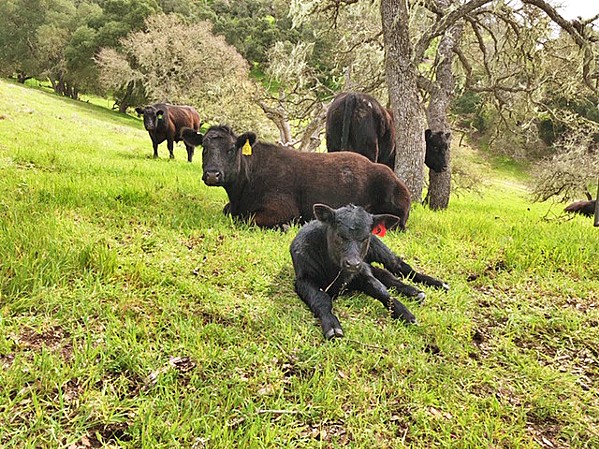 When the partners started their business in 2009, the two friends were aware of the growing market for a healthier alternative to store-bought meat. Woolley and his wife and Emery and his family had already been ranching grass-fed/grass-finished cows, so it wasn't like they had to reinvent the wheel. They each had sets of mother cows, were raising calves, and selling at auctions. Emery, a Templeton High class of 2000 grad, comes from five generations of Paso Robles ranchers and learned about cattle from his father and grandfather.

His wife, Katie, is also involved in running the business. When I asked if his two kids (a 2-year-old and a 3-month-old) will one day be involved in 4-H, he laughed. "Oh yeah ... one day."

For Woolley, a fourth-generation cattle rancher, it was his uncle and mother who showed him the ropes. His dad taught him how to hunt and fish.

When Woolley and his wife, Darian Buckles, moved to Templeton from Ventura County 20 years ago, they kept a few cows for themselves. After harvesting the meat, Woolley likened the exceptional flavor of the beef to the meat he remembered from his childhood.

"That's where it all started for me," he said, "from that flavor."

The Templeton Hills Beef partners met when they were both working as elk and mule deer hunting guides on one of the Channel Islands, and they combined their love for ranching in 2009. They've been supplying meat straight to consumers and a few restaurants ever since. 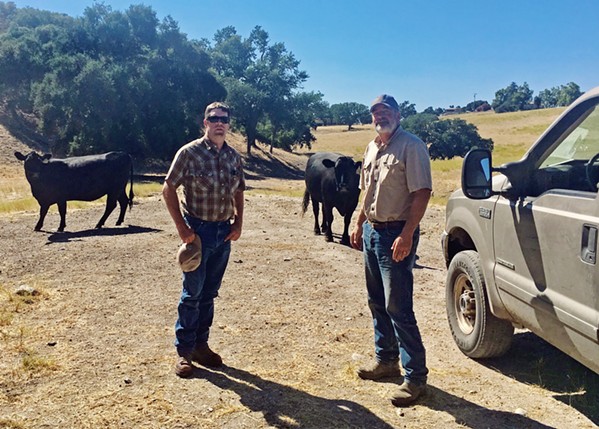 I can vouch for the flavor—Templeton Hills Beef tastes better than any beef I've ever had. Here's why: Their cattle live a life of ease, and Woolley and Emery spend the extra time to ensure they're also grass-finished—meaning they care for their cows from birth to harvest—rotating the herds on native pastures in and around Templeton. And naturally, the livestock have never been given antibiotics or growth promoting hormones.

According to the American Grassfed Association, the result of grass-fed/grass-finished beef versus grain-fed beef is leaner and juicier meat due to a higher moisture content rich in omega-3 fatty acids (four times more omega-3 acids than grain-fed), vitamin B6, and beta-carotene, and lower cholesterol. Grain-fed beef tends to be greasy instead of juicy because the animal has been fattened up on a variety of grains such as hay or corn by-products.

"We try to keep it healthy and lean, and what our customers are looking for," Emery said.

Woolley added that most of their customers are young families looking for a healthy alternative to conventional beef.

The guys let me know the term "grass-fed" is unregulated as of yet, which is why the distinction of real "grass-finished" beef means more than just another label, and compels me to think you really need to know your rancher.

And here we thought we were being so angelic by making sure our beef at the market had that USDA prime, choice, or select beef or even that "grass-fed" sticker on it. All those stickers mean is the rating of tenderness/juiciness/and flavor. When the USDA says the cow was "well-fed," if it was prime, that could mean well-fed with GMO corn. Additionally, the term "grass-fed" may not necessarily mean the cow was fed a grass diet its whole life. It only means the cow started on a grass-fed diet and could have been fed grains for the remainder of its life. A more accurate sticker would be: "grass-fed, grain-finished beef."

On a typical day, Woolley and Emery wear many different hats and work extra hard when it comes to their cattle. They are meticulously hands-on. 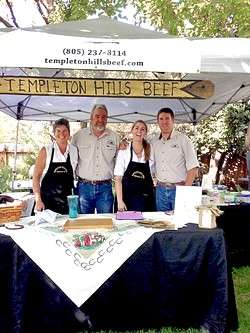 "It's just the two of us and our wives," Woolley said.

They may be working on moving meat from J&R Natural Meat and Sausage (their butcher) to their own storage freezer, on the phone filling orders, building cross fences for grazing, digging water lines, working the farmers' market, making deliveries, finding the next lease of grassy pasture for their cows, or checking on their herds.

On the day I met them, they were looking to move their herd "to greener pastures." In order to keep their cattle on a grass diet, they need to rent hundreds of acres of land in North County in a constant rotation. Like vegetables and fruits, they have "harvests," and like produce, they have their lulls. In spring and again in the fall, they go through calving and working on getting their mother cows rebred. In February and March, they usually run out of meat, so they take pre-orders until the next harvest, which is a strategic process they just finished.

After taking that ride up the hills to visit the cows, I have a much better appreciation for the work that it takes to bring us healthy meat. Δ

New Times contributor Beth Giuffre is looking for greener pastures. Show her where the hills are alive at bgiuffre@newtimesslo.com.