Templeton will begin searching for a full-time fire chief

After the successful passage of Measure A in August 2019, the Templeton Community Services District will continue its effort to provide comprehensive emergency response by starting to look for a new fire chief.

"This really is the plan that Measure A was built upon," Community Services District (CSD) General Manager Jeff Briltz said.

Measure A funding, which will enable the department the ability to provide staff 24/7 instead of the current nine hours per day, is slated to take effect in December 2020. 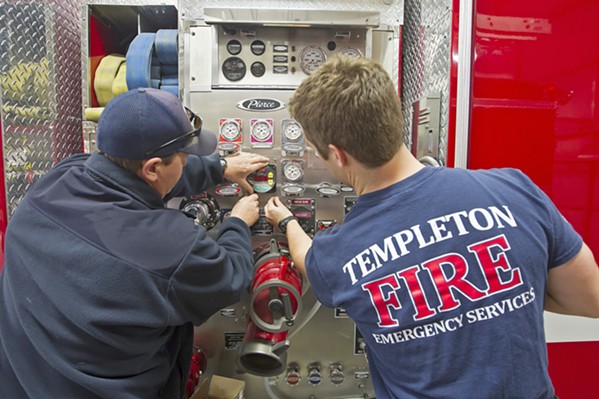 In September, White was promoted to battalion chief for the Atascadero department, and with it, Briltz said, came a more traditional work schedule.

"So his availability to work for us on his days off has really diminished. He doesn't have days off like he did as a fire captain, but he's still in that role [with Templeton Fire], it's just very limited," he said. "The [city of Atascadero] has been really kind to allow him to continue to serve even though it does conflict with his regular schedule sometimes."

In an effort to fill the leadership gap, at the beginning of December 2019 the Templeton CSD board discussed the option of either entering into an agreement with Atascadero to provide fire administration or to fill a full-time fire chief position.

According to a CSD staff report, Atascadero decided not to proceed with the proposed agreement because it had several concerns. Issues included differences in expected service levels and staffing between the two agencies, the challenges of providing overhead coverage for critical incidents, wildland fire risks in Templeton, implementing the 24/7 staffing program, and providing the necessary leadership of the organization with limited resources.

At the Jan. 7 Templeton CSD meeting, the board unanimously voted to begin the process of searching for its next fire chief at the end of the month. The move will help the CSD meet its 24/7 staffing goals by the summer season.

Briltz said he is confident the district will get a good applicant pool but said it will be a challenge to fill the position.

In terms of the position's salary, he said the district is uncertain of its competitiveness within the local marketplace.

More importantly, the position isn't as cut and dry as it would be for another fire agency. While there is more funding with the passage of Measure A, the fire department will still be staffed with part-time fire personnel—it still follows the part-time or reserve firefighter model. That model translates to a high turnover rate of firefighters that come in to get the experience—receive training from Templeton—and eventually leave when they get a full-time position elsewhere.

He said the full-time chief position is for someone who is passionate about providing fire and emergency services to the area.

"And is willing to be creative and work with the resources that we have available. It will be someone who can embrace a reserve firefighter program that's essential to our success," Briltz said.

While other departments are working to move away from the reserve firefighter program, as Five Cities Fire did in 2018, the district is making its program work because it's affordable.

"Maybe it won't work in 40 years, but we can make it work right now," Briltz said. Δ