It's been 10 years since fellow film nuts John Jones and Bob Whiteford combined their personal movie collections to open The Insomniac, an independently owned video and DVD rental shop that specializes in eclectic films. 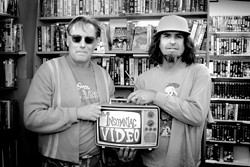 # They started with 2,500 titles in a little storefront on High Street.

"$91 not bad!" added Jones, a visual artist and musician.

"Yeah, that was pretty good. It was the next day when we made $8 that the bubble kind of burst," laughed Whiteford.

Now 10 years later, the two guys who got into the business to "be their own boss" have more than 14,000 films and a much bigger (but still terribly small, compared to Blockbuster standards) store at the corner of Broad and South streets.

How have they managed to keep this business afloat over the years as one local independent video store after another has closed in the face of fierce competition from national chains like Blockbuster and Hollywood not to mention online businesses such as Netflix?

The short answer is: by offering people things they can't find anywhere else, and by sharing a passion for films that don't fit the Hollywood formula.

"We started our own collections because we were looking for movies we couldn't find [at rental stores], and if you wanted to see them you had to buy them," explained Jones, who said he and Whiteford also raided closing video stores to buy out-of-print videos.

They were admittedly na've when they opened. Neither had much small-business experience. Jones had worked as a clerk at Linnaea's Cafe and Sandy's Liquor, and sold silk-screened T-shirts he made by hand. Whiteford had lived in SLO for a while before moving to the Bay Area to take a job with Charles Schwab as a "glorified electronic clerk."

When Whiteford returned to SLO on leave from work to take care of his terminally ill mother, a mutual friend who knew that both Whiteford and Jones had toyed with the idea of opening a video store suggested they join forces.

"When the video store idea came up, I thought how much more refreshing that sounded compared to a cubicle and a bunch of ass-licking suits [at Charles Schwab]," Whiteford said.

"It was a timing thing," Jones said, "and personally I felt like the community needed it. It was going to be some place to find artistic rather than just commercial films to see. Not that it was purely altruistic. I think the idea works as a business model because we're filling an unfilled niche."

Both men credit Teri Peterson of Stuff-O-Rama for helping them figure out the retail biz. Her hipster gift and kitsch shop shared space with Insomniac and moved with them to their current location, though she's since made her business online only (www.stuff-o-rama.com).

"She had the most retail experience, and when we turned up our noses at new Hollywood releases, she convinced us otherwise," Jones said.

"She told us it was a means to an end. That getting the new stuff would allow us to get the Kurosawa and the Bunuel films that we wanted," continued Whiteford.

"It made us our money when we needed it," Whiteford said.

It also eventually became more of an annoyance than it was worth.

"I remember one DVD came back covered in a kind of glaze, and I just threw it away," Whiteford said.

"I eventually became sick of it, and one day said, 'That's it,'" Jones said.

The store is also intimidating to some because it's not set up like other video stores. Instead of huge sections for action and drama and comedy, the films are often arranged by era, subgenre, or artist such as "1940s film noir" or "films of Martin Scorsese."

"It's certainly not our objective to intimidate," Whiteford said.

"And we also keep a lookout for customers who seem confused," Jones said. "I just ask them what they're looking for and get it for them."

Arranging by genre or director or actor also helps educate customers who might come in to rent rock band The Who's fantasy film Tommy by Ken Russell and decide to check out Russell's campy gothic horror film The Lair of the White Worm as well.

"They get a little education whether they want to or not. I kind of think of us as a reference library," Jones said. "We've got a huge documentary section."

"We love movies," said Whiteford. "We have to restrain ourselves from buying too much."

At least 50 percent of the money the store makes goes to buying new titles.

"Even stuff that sits on the shelf and goes unrented we still refuse to get rid of it because we know the value of it," Jones said.

"Plus, when people come in and ask us about something obscure, they get someone who knows what they're talking about, not just blank stares," Whiteford said.

"We even have a lot of teachers coming in and asking what we have on certain topics," Jones said. "We also have a good relationship with other video stores who send people our way if their store doesn't have what the customer is looking for. We're sort of the last stop. If we don't have it, it's probably time to give up."

The Insomniac also has something other stores don't: VHS tapes! Some of the films have never been transferred to DVD, and many of Insomniac's customers don't own DVD players or subscribe to cable TV.

"I'm not going to say they're Luddites, but they've gone as far as they're going to go with new technology," Whiteford said. "There comes a time when some people get sick of having to buy new hardware every time a new format is invented."

"I really thought other stores would try to put us out of business, but that didn't happen," Jones said.

"I don't think we cut into their action too much," Whiteford added. "We're giving people options. I think that's why we're still here. We offer a valuable resource."

That's the real key to The Insomniac's success: customer service. It's how the business started.

"When we started, we had a book on the counter where we asked customers to write suggestions," said Jones, who also mentioned how they let current events drive their buying habits. After the Iraq invasion, they started buying documentaries that represented all sides of the discussion.

"We're here for the community, and we can only last as long as the community wants and supports us and they have supported us. For that we're very grateful," Whiteford said.

Think of The Insomniac as the anti-Blockbuster. The 10-year-old hole-in-the-wall video and DVD rental business lacks the glitz, the merchandising, and the focus on new releases that are the earmark of national chains, but they're turning film buffs into film fanatics one customer at a time. ?

Glen Starkey learned everything he knows about the movies at The Insomniac. Contact him at gstarkey@newtimesslo.com.