"I am done pretending that this is a real discussion," declared a fuming Heidi Harmon, shortly before the San Luis Obispo mayor dropped her microphone on a table and stormed out of the SLO Guild Hall on July 26 to both cheers and jeers.

Harmon left behind her November election challenger, T. Keith Gurnee, and a roomful of SLO County Progressives Democratic Club members and community observers. Before the eruption, Harmon and Gurnee had been engaged in a question-and-answer forum on SLO city issues, as the two vied for the endorsement of a political organization that Harmon co-founded in 2016. 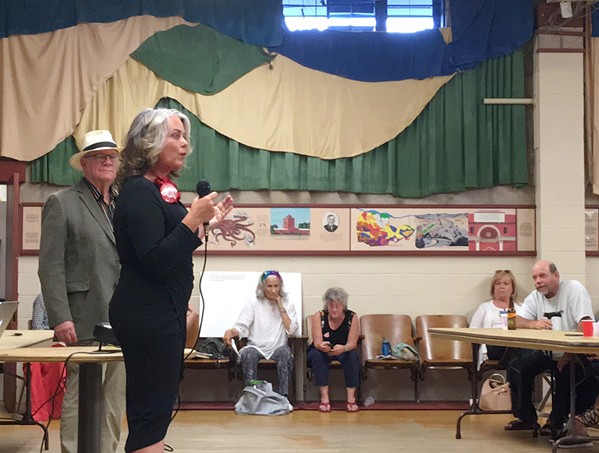 Club leaders said they were perplexed that Gurnee—a retired urban planner and former SLO City Council member—had even sought its endorsement. A longtime Republican, Gurnee switched his party affiliation to Democrat in May, just days before announcing his candidacy for mayor, which he said was a reaction to the Trump administration's child separation policy at the southern border. But in several op-ed columns he's penned in the media as recently as April, Gurnee has lambasted the Progressives Club as "schizophrenic," led by "zealots" and "political hacks" on a "downward spiral toward irrelevance."

Now, suddenly relevant to Gurnee, the club merely followed its bylaws when considering his request. They state that any registered Democrat running for public office must be considered for an endorsement.

Tension built in the room and impatience grew in Harmon as the forum progressed. Some Gurnee supporters sat in attendance, groaning audibly at Harmon and cheering for Gurnee. He received broad applause after he was asked and agreed to sign a pledge to not accept campaign donations from the oil and gas industry—something that Harmon, who's built her political career on environmental activism, had already done.

As the debate stretched past the half-hour mark, Harmon reached a boiling point and abandoned decorum.

"Why are we even here right now?" Harmon asked the room. "This is ultimately a totally ridiculous juxtaposition and ridiculous choice and conversation. This is someone that's been a Republican. This is someone who is proud to have left a SLO City Council meeting—of which he wants to be the lead of—to attend [conservative 4th District County Supervisor] Lynn Compton's election night party. This is someone that's spent every inch of ink he could find to disparage me personally, my council members ... and the hard work we've done every single day for years.

Harmon marched out of the hall, and a fiery exchange immediately broke out in the audience.

"This is why progressives are going to go down the drain," yelled a supporter of Gurnee's, who stood up to face the attendees. "I'm as liberal as anybody. This arrogance—this talking down to an established, accomplished, elderly gentleman—this arrogance is what's going to cost all of us, because we'll have to live through four more years of Trump. You're a bunch of know-it-alls."

A club member then handed the man his belongings and told him to leave, to which he shouted: "Who are you to tell me to leave?"

"I'm a progressive, that's who I am," the member screamed back. "Get the fuck out!"

After tensions simmered a bit, Gurnee fielded a few more questions and then he, too, exited so the club members could deliberate and vote. Three local elected officials in attendance—3rd District County Supervisor Adam Hill and SLO City Councilmembers Aaron Gomez and Andy Pease—addressed the room and threw their support behind Harmon.

Gomez and Hill reamed Gurnee for engaging in what they alleged were deceptive politics.

"It's grandstanding at its best," Gomez said. "I've already endorsed Heidi. Her leadership is amazing."

"He is a charlatan," Hill said, pointing to Gurnee's record as a conservative and a professional representative for hotly contested county projects like the recently revived Las Pilitas Quarry in Santa Margarita. "He is not somebody you can trust to represent your interests."

Progressives Club members voted that night by an 81 percent majority to endorse Harmon. Ten percent chose to endorse Gurnee, while 9 percent voted for "no endorsement."

"I knew I wasn't going to be endorsed," Gurnee told New Times days after the meeting. "It was her show. The progressives are her group. ... I wanted them to hear me and see me and understand my points of view."

In an interview with New Times the day after the blow-up, Harmon said she supports "in theory having inclusivity and a lot of different voices" on the mayoral campaign trail. But she held firm that Gurnee was "disingenuous" in the way he represented himself and called it "dangerous to have someone in that space who has been so committed to fighting against our values and us personally."

"I would say that having someone like Keith Gurnee coming to ask for the progressive endorsement would be like the NAACP having David Duke coming to ask for their endorsement," Harmon said. "This is a group that has a very specific and committed set of values that Mr. Gurnee has done everything in his power to work against. To me, what it said was we're sort of putting him on equal footing as [far as] progressive values."

Gurnee said the abrupt end to the forum "kind of surprised" him.

"While she was walking out, I was asking her if that's her version of civility," he said.

The candidates' spat kicks off what all signs indicate will be a contentious election season. While Harmon has the progressive endorsement in the bag, not all of its members and city residents are thrilled with the City Council's direction. Concerns and complaints about development came to the forefront of the forum—criticisms that are at the core of Gurnee's challenge for the mayor's seat.

"I am shocked and dismayed by the changes that I'm seeing," one SLO resident said at the Guild Hall on July 26. "Everything I've seen since Heidi [was elected] has been overdevelopment. ... Nothing that speaks to the character of this town."

But others stood up for encouraging housing development in a city that has severe issues with housing supply and affordability.

"Young people are scraping by to stay here. ... It's incredibly hard," said Andre, the club co-chair. "If people in this room want to say, 'Oh too bad,' that's fine. But that's absolutely not progressive." Δ