After heavy travel led to extensive wait lines at the Madonna Inn's Tesla supercharger station over Thanksgiving weekend, Tesla engineers rolled out one of the company's first mobile supercharger units—possibly the first megapack battery-powered mobile unit ever to be used.

Tesla initially installed 10 public charging units at the Madonna Inn in May 2018, according to Mat Tornquist, operations manager at the hotel. Situated just off Highway 101, smack dab in between San Francisco and Los Angeles, the inn's charging station gets busy, Tornquist said. 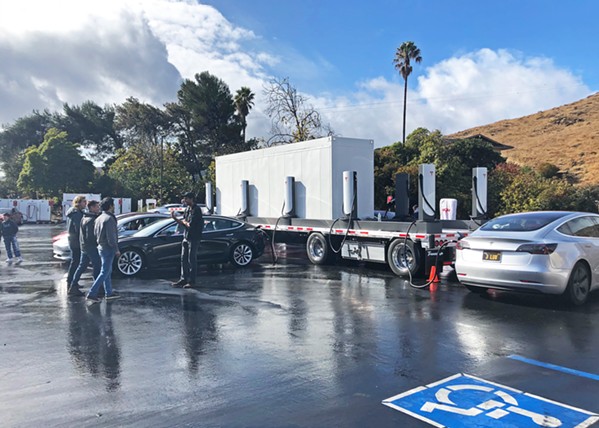 "It's a very coveted location," he said.

Just before Thanksgiving this year, Tesla installed eight additional charging units at the inn—four of which aren't yet operational—and two universal chargers that drivers of any brand of electric car can use free of charge.

Still, the new chargers weren't enough to support the constant flow of holiday traffic over the weekend, and lengthy lines of Teslas waiting for juice built up in the Madonna Inn parking lot throughout the weekend. But the company had a backup plan, and on Nov. 27, Tesla engineers deployed one of its new megapack battery-powered mobile supercharger units for what's thought to be the first time, causing a stir among local and national Tesla enthusiasts.

Arroyo Grande resident and Tesla owner Sofiaan Fraval excitedly tweeted about the "urban chargers on wheels" on Nov. 27, posting and retweeting photos and videos of the devices and interviews with the engineers who deployed them.

The mobile chargers look essentially like the stationary ones, but they're installed onto a semi-truck trailer, and Fraval said the entire unit can charge about 100 vehicles before it needs a recharge itself. They charge at a higher delivery rate, Fraval said, and can be recharged using solar energy.

Fraval called the mobile megapacks "game changers" that could be useful during PG&E emergency power shutoffs, and could help decrease wait times at busy supercharger stations at the drop of a hat. Tesla's own data analysis determined that the Madonna Inn supercharger station was one of the busiest on Thanksgiving 2018, which Fraval said led to the decision to bring the mobile unit to San Luis Obispo.

"I believe it's the first time the mobile megapack has been used anywhere," Fraval told New Times. "That's why it was quite amazing to witness firsthand."

Tesla's press office couldn't be reached for comment before press time, and President of the Central Coast Tesla Club Jesse Martinez couldn't confirm whether this mobile megapack was the first ever used. But Martinez, also an Arroyo Grande resident, said it's definitely new technology.

"It was great," Martinez told New Times. "There were a lot of vehicles, but it was a very cool concept. It worked out really well."