Testing the waters: Locals prepare to submit a nomination to create a National Marine Sanctuary along the Central Coast

A wise animated crab once said: “The human world, it’s a mess. Life under the sea is better than anything they’ve got up there.”

He was biased, of course, but nonetheless, there are some land-roaming humans who might agree. 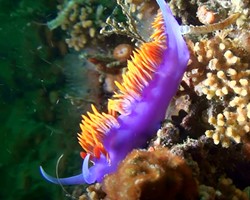 In the waters off the Central Coast, 13 different species of whales and dolphins come to feed, sea otters are prolific, numerous species of fish move about in schools, shrimp and squid abound, and seals dart through the water, all gathering around the extensive kelp forests, which act as a nursery for sea life. Sea urchins dot the ocean floor, joined by anemones, colorful sea stars and sponges, and the nudibranch.

The offshore world represents a host of biodiversity, recreation, valuable resources, and a magnet for tourism.

Now, a group of local ocean lovers is looking to protect the waters off this coast. Led by the Northern Chumash Tribal Council, a mix of environmentalists, business people, scientists, and surfers have come together to recommend that the Central Coast waters be considered for designation as a National Marine Sanctuary.

The designation would bolster the area’s protection, creating a set of guidelines for its management and protection from possible fossil fuel exploitation or other threats.

Collins is leading the charge, putting the finishing touches on an approximately 25-page document that will give the nomination to an area that—if designated—would become the Chumash Heritage National Marine Sanctuary.

Submitting the nomination, which Collins plans to do in December, will be just the beginning of a long, intensive, and complicated process that will be taken on by the National Oceanic and Atmospheric Administration (NOAA). 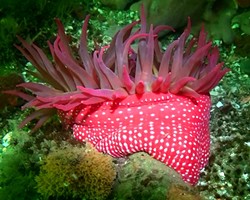 Now, almost 25 years later, there’s a rejuvenated effort to create the Chumash Heritage National Marine Sanctuary, attempting to “close the doughnut hole” between the two sanctuaries on either side, further expanding protections to the ecosystem that will guard cultural heritage and biodiversity, while potentially warding off new offshore oil drilling.

The nomination will propose an area of ocean that covers 90 miles of coastline and veers west 70 miles, to include prolific upwellings and the Santa Lucia Bank.

The proposed boundaries were drawn up to include a long list of sites that are both biologically and culturally significant. Collins said there are a number of Chumash sacred sites, as well as shipwrecks with historical significance.

The Chumash, the people indigenous to this area, first walked this land 18,000 years ago and had an intimate relationship with the sea. They were fishermen and seafarers.

Protecting sacred sites is just one aspect of the big picture for those pitching the nomination; they also have their eye on keeping the horizon free of offshore oil drilling.

The establishment of a sanctuary may also create a comprehensive hub for research and for various stakeholders to visit a complex network of interests.

Once the nomination is submitted, NOAA will take three to six months to review it and decide whether to place it in an inventory of nominations or to reject it, said Lisa Wooninck, policy coordinator for the NOAA sanctuaries program’s West Coast regional office. If the sanctuary makes it to the inventory list, the long haul commences.

The inventory is a queue of sorts. If NOAA decides to consider the site’s designation, a multi-year, intensive community process will begin during which the public will be asked for input, stakeholders will make their cases for or against it, and the sanctuary’s shaping begins.

What the proposed sanctuary will or won’t actually do would be hashed out during that time, a process Wooninck said can take anywhere from three to six years.

There’s some baseline framework that was first put in place when the National Marine Sanctuaries Act passed in 1972, but the specifics are tailored to every sanctuary.

“They typically have regulations that broadly limit or regulate disturbances of the sea floor, wildlife disturbances, or degradation of water quality,” Wooninck said.

Such potential impacts could come from agricultural runoff, waste outfalls, recreational activities, certain types of commercial fishing, or drilling. The latter—extraction of oil, gas, or minerals—would likely be banned; this has become one of the key reasons supporters of the sanctuary are pushing for its formation.

While offshore oil in the area hasn’t expanded much in recent years, there’s a slew of leases waiting to be exploited, several of which are in the proposed sanctuary boundary. While an entrenched fight has held off nearby drilling, environmentalists worry that the coast can hold out for only so long against an industry driven by the high cost of oil and rising demand.

“The potential to have oil producing mechanisms off our coast is great,” Collins said. “We’re looking at the preservation of a long-term process of keeping out the harmful activities.” 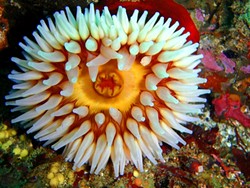 Existing oil rigs won’t be shut down but would join various existing operations—such as the Diablo Canyon Nuclear Power Plant, the Morro Bay Harbor, and Vandenberg Air Force Base—that would be grandfathered in and exempt from the sanctuary’s mandates.

Many of these operations are already regulated by a federal or state agency, and that agency would likely still trump the sanctuary. Because the proposal hasn’t been submitted yet, let alone widely circulated, representatives for Diablo Canyon or an oil industry association didn’t have a comment for this article.

A new body would bring plenty of questions from people wondering whether they’ll have more rules to abide by.

Wooninck said a sanctuary is governed by more of an advisory council, which, if anything, coordinates the various interests carrying out its own mission of preservation. Still, the idea that another agency may be thrown into the mix, increasing rules and regulations, doesn’t excite everyone.

Whenever the question of coastal management, habitat protection, and possible regulations arises, there’s a good chance that the local fishermen will have something to say about it.

For an industry deeply rooted in coastal waters, fishing hasn’t gotten any easier in the last few decades. Fishermen say they’ve felt squeezed by new regulations and management philosophies, many of which have been the result of efforts to protect sea life.

This has created a deep rift between fishermen and the environmentalists who are proponents of such new policies. It’s a fissure that often results in tension between two groups, that tends to be highly emotional, and has led fishermen to view local environmental groups and the federal and state governments with distrust. The relationship between these various parties is detailed by very long, complicated sagas, where wildly opposing ideas over how to best manage the ocean and the fisheries clash.

Tom Hafer, a fisherman and president of the Morro Bay Commercial Fishermen’s Organization, is wary of a new sanctuary in the area because he says it would further restrict access for commercial fishing in an area that doesn’t need new regulations.

“We already have enough protection of the ocean on this part of the coastline,” Hafer said.

His fellow fishermen and he have had a rocky relationship with the Monterey Bay National Marine Sanctuary (MBNMS), using that example as a reason for why they don’t want a new sanctuary here. Hafer sees the MBNMS as a body that may not directly regulate commercial fishing but certainly exerts an influence in the creation of new laws and regulations.

They worry about what role a sanctuary’s advisory board would play in setting policy. Collins has attempted to address those concerns, sitting down with representatives of the Morro Bay Commercial Fishermen’s Organization to discuss the proposal.

“We’re the first fishermen along this coastline,” Collins said. “We understand their industry, and in our document in big bold letters the very first thing it says is that we do not regulate fishing in the marine sanctuary.”

Collins has reiterated this and drafted the proposal to explicitly state that the sanctuary wouldn’t regulate fishing. This, Collins said, is made clear because he wants to engage with the fishermen and work things out as a community—especially because he understands that the Chumash and the fishermen share a particular history of at one time or another getting screwed by the federal government.

While they appreciate Collins’ intentions, the fishermen question whether these promises might change during the process, said Jeremiah O’Brien, a director of the Morro Bay Commercial Fishermen’s Organization. He has a hard time believing that locals would keep control of an agency that’s created and overseen by the federal government.

“Once you have a national marine sanctuary on your shores, local control goes out the window,” O’Brien said. “We are talking about a national marine sanctuary. That means that it is owned and operated by the federal government. There will be no private sanctuary. The federal government is in control period. Period. My question is how much sanctuary do we need or want, and why? What are we doing here?”

If NOAA considers the nomination, that will be the question. Still, it will be pitched to a vast array of stakeholders throughout a community incredibly intertwined with the ocean.

NOAA’s Wooninck said that the process of involving all  the stakeholders—including the fishermen and the Chumash—would drive what a sanctuary could look like. The end results may not be popular with everyone.

“We’re dealing with a part of the ocean that is cherished by a lot of people for different reasons, so the decisions that we make aren’t always going to make those various loves of the ocean happy,” Wooninck said. “Banning oil and gas exploration doesn’t necessarily make Exxon Mobil happy.”

Still, Wooninck said that all groups will have their opportunity to play. In fact, inclusiveness is a key element to the new nomination process. In 1990, NOAA or Congress made nominations. Now, it’s community driven.

“Community members really have a voice in managing the direction of that place that they feel strongly connected to,” Wooninck said.

As of now, the only thing there is to do about the sanctuary is speculate. Aside from the proposal, which makes a case for the designation process to kick off, there are no specifics.

Whether NOAA will give further consideration for the Chumash Heritage National Marine Sanctuary to join the 14 existing sanctuaries in the United States—four of which are in California—remains to be seen.

In the meantime, people with a stake in the decision will continue to pitch their take on the matter.

O’Brien said that the Alliance of Communities for Sustainable Fisheries has commissioned a study that will assess the potential economic impacts of a sanctuary. That study is expected to be completed early next year, and it may offer another take on the matter.

The California Sierra Club also commissioned a study, acting as a friend of the Chumash in this process, concluding that a sanctuary could add, at minimum,  $23 million a year in revenues and create 600 new jobs, generated from government funding of sanctuary offices and staff; nonprofit and academic funds for research; increased coastal tourism; and increased property values and increased tax generation.

The establishment of a sanctuary may also create a comprehensive hub for research and for various stakeholders to visit a complex network of interests.

“We could bring a lot of money to this county, I believe, with a marine sanctuary,” Collins said.

Margaret “PJ” Webb, a Cambria-based public interest attorney who currently chairs the MBNMS Advisory Council, looks at the creation of a new sanctuary in the area as a great opportunity for everyone to navigate existing laws and regulatory agencies.

“So many of the federal laws or the state protection laws are like going to a specialist, like going to an oncologist,” Webb said—not speaking on the MBNMS’ behalf. “The National Marine Sanctuaries Act is an ecosystem-based, comprehensive form of protection.