If all goes according to schedule, Pacific Gas & Electric could be launching the final phase of its long-awaited seismic surveys off the Central Coast by August 2012.

But following the most recent Environmental Impact Report (EIR) from the California State Lands Commission—the agency PG&E is courting for the permits necessary to do the job—local fishermen and coastal communities have raised concerns ranging from impacts on wildlife to economic losses. 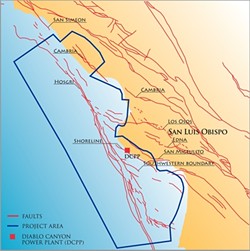 For the final “high-energy” phase of its studies, PG&E proposes closing off 530 square nautical miles of open ocean from San Simeon to Guadalupe. Within the project boundaries, PG&E vessels will tow a cauldron of sound-generating air guns and sound-recording reflective equipment in a grid-like formation in order to get a better record of the seismic landscape surrounding the Diablo Canyon nuclear power plant.

The tests have become the major prerequisite in the plant’s relicensing process, thanks to a state law adopted in 2006. But getting to the final phase has required a considerable give-and-take from all parties involved.

It’s the “take” that has the local fishing community reeling.

According to the Lands Commission draft EIR, released March 19, the project would create “potentially significant” impacts on air quality, terrestrial and marine life, greenhouse gases, land use, and recreation.

On April 24, the Morro Bay City Council voted to send a scathing letter, drafted by City Attorney Rob Schultz, to the Lands Commission, laying out a laundry list of issues the city claims weren’t taken into account.

By and large, the main issue at stake is the commercial fishing industry, a critical component of the city’s economy. Fishing vessels would be prohibited from operating within the testing boundaries during testing in the proposed 82-day period.

Moreover, the city argues that the project boundary spans the entire mouth of the harbor and would preclude vessels from coming or going for the full 82 days. It questions whether doing so is even legal, given Morro Bay Harbor’s designation as a “Harbor of Safe Refuge,” making it the only protected harbor between Monterey and Santa Barbara. At minimum, U.S. Coast Guard vessels can’t be restricted from their patrolling and emergency response capabilities, the letter states.

Portions of the project boundary also extend over federally mandated marine protection areas, where fishing is prohibited. Schultz argues that the impacts from the air blasting would result in the same kind of “take” of fish, larvae, and eggs.

“The fishermen are not exempt from a ‘take’ of fish in protected areas, and the same should be the case under the law for PG&E,” Shultz wrote.

Lastly, the city took issue with the state’s permitting process in general, claiming that affected parties aren’t being given enough time to go over the report and provide comments.

“… While the State Lands Commission and PG&E may have met the minimum noticing requirements … the timeline for comment on this is woefully inadequate for meaningful analysis and comment by the public, and seems on a fast track suited only to PG&E and their project calendar and commitments,” the letter reads.

Morro Bay Mayor Bill Yates—a former commercial fisherman—told New Times that a possible harbor closure is not only drawing ire from the fishing community, but also from local business owners who depend on selling the fishermen everything from coffee to fuel.

PG&E Spokesman Tom Cuddy told New Times the utility has heard the concerns, but that there are some misconceptions. Access to and from the harbor will still exist, he said, though it will be limited. Cuddy didn’t deny that commercial fishing would be greatly affected. He said the closure is a small price to pay to assure the plant continues to provide energy to the state.

“These advanced seismic studies are so critical to the future of [Diablo Canyon] and it’s important we start moving on them,” Cuddy said. “But that said, we’re committed to keep an ongoing dialogue to mitigate any impacts to the community.”

Cuddy said the utility is trying to increase its communication with the fishermen, and added that it’s mulling over ways to compensate them for the inconvenience. He couldn’t provide any specifics on a possible deal.

But Jeremiah O’Brien, president of the Morro Bay Commercial Fishermen’s Organization, said he doubts PG&E will be able to make up for what he equated to an 82-day “layoff” for the fishing community.

“A lot of fishermen, if not most of them, will lose their jobs. They’ll be facing a layoff, basically,” O’Brien said. “[Contracting local boats] is not going to do anything to change that.”

Aside from the blocked access to the prime fishing waters, O’Brien said the fishermen are also focused on long-term impacts to local sea life from the blasts of the air guns, which could impact future seasons.

The period for the public to weigh in on the report ends May 3.

According to guidelines laid out by the California Environmental Quality Act, the commission will respond to all comments with “good faith, reasoned analysis” and take into account each “significant” environmental issue raised, said Jennifer DeLeon, the State Lands Commission project manager for the permitting process.

Responses to public comments and any revisions to the draft report will then be compiled into a final EIR, to go before the commission for certification. If approved, PG&E will be issued its permit to conduct the tests, which it hopes to begin in August.