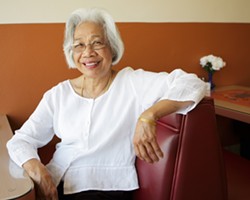 During the past five years I’ve reviewed two South County Thai restaurants that started out quite impressively. To my dismay, I soon discovered the opening chef of one suddenly moved on. When I had returned, it was obvious at the first taste of my favorite dish. When I asked if the chef had left, the server said: “Yes, but we’re still using the same recipes.” It was clear that whoever took over the kitchen lacked the good taste of the original chef. It bummed me out. Thank goodness an amazing restaurateur, Boonie Walton, chose the Five Cities to open Boonie Thai Cuisine II.

She opened the original Boonie Thai Cuisine in Santa Maria 16 years ago. My first visit at Boonie II was with a good friend who turned me on to the new eatery. We shared the fried appetizer combination, which included jumbo prawns, egg rolls, and battered broccoli and eggplant ($9.95). The huge order came with a delicious sweet/tart dipping sauce with garlic and chili peppers that would make anything it touched taste better. Admittedly, I preferred the entrees. I thoroughly relished Boonie’s chicken curry with bell peppers, onions, baby corn and cashews. My favorite was the snow crab noodles, which looked like Top Ramen, greatly improved. It was topped with carrots, bell peppers, onions, bean sprouts, garlic and big pieces of snow crab. It’s served with hot jasmine rice on the side, or choice of brown rice ($1 extra). 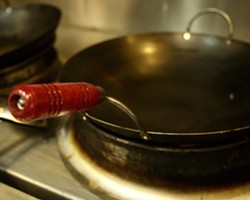 I returned two days later with my mate, Dan Hardesty, and was thrilled to find the quality of Boonie’s food consistent. We started dinner with the giant chicken wing, which is deboned to the wing tip, then stuffed, breaded and deep-fried. The stuffing, Boonie later explained, is the same mixture used in the eggrolls: ground pork, bean thread noodles, and bamboo shoots. What makes it extraordinary is her sweet-and-sour, cucumber relish. She serves her sweet-and- sour sauce with freshly sliced cucumber and red onion. Talk about taking this dish up a notch: The crispy, crunch of the cucumbers and red onions in the sweet and sour dressing gave the mild-flavored chicken wings pizzazz. Our entrées didn’t disappoint, either: the rich rahd nar noodle offers soft, flat noodles tossed with chicken, broccoli and scrambled eggs in a black bean sauce.  You’re given a choice in several of the noodle dishes of chicken, beef or pork ($8.50), or prawns ($9.95). 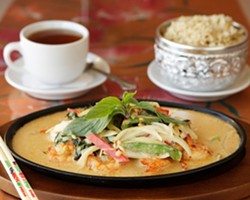 Born in Thailand, Boonie emigrated from Bangkok to the U.S. in 1979, to provide her two young daughters an American education. To support her family, she often had to take on two jobs at a time. When she met her future husband, Otis Walton, he was an Air Force veteran who continued to work in the industry at Vandenberg and the Santa Barbara Airport. When Boonie opened her first Thai eatery in Santa Maria in 1995, they kept their home in Lompoc. Otis was offered another job in San Bernardino, but Boonie asked him to retire and help her run the Santa Maria restaurant. He agreed and continues to cook there, as does their oldest daughter, Rachel. It’s clear by the opinions on yelp.com locals love the original in Santa Maria. Few locals have discovered the Grover Beach location, but this is Thai food worth the drive.

Boonie oversees her kitchens and works at both restaurants throughout the week. During an interview at Boonie’s II, where she spends most of her time lately, she said she knew the previous restaurant owners that rented the same spot. She recalled a woman whose husband passed away just after they opened a restaurant there. “She told me she didn’t like coming back to the place as it made her think of her husband who she missed,” Boonie remembered. “I tried to tell her it’s not easy to run a restaurant, you have to work hard for it, but it’s worth it.”

Boonie is proud of the fact her regular customers think her traditional dishes are the best, rightfully so. “One of my regular customers told me, ‘I couldn’t find pad Thai like Boonie’s when I traveled to Bangkok,’” she remembered happily. “I train our cooks until they’re really good at what they do. But I still stop in at both restaurants everyday to make the sauces and check on what they’re cooking.” Boonie considers her employees part of her extended family, and teaches them the customer should feel like they’re part of the family, too. “People sometimes say to me, ‘why don’t you retire?’ but I can’t stand the idea of sitting home and clicking through the TV stations; I like staying busy.”

Every two weeks, Boonie creates a new menu of lunch specials, a real value at $7.50 each, Monday through Friday, 11 a.m. to 2:30 p.m. I loved her curries, which I tried again during my third lunch visit. The honey-roasted duck curry is delicious with the mixture of bell peppers, corn, onions and green beans in an irresistible red curry sauce. I devoured the familiar tasting yellow curry (similar to the Chinese version) with chicken, potatoes, onions, and carrots in coconut milk. I tried both curries over the toothsome brown rice and found myself torn over which one I liked best. Once you’ve met the vivacious Boonie, like me, you’ll be eager to return to try more of her delicious Thai cuisine.