Thank you for sharing

Whether you love them or hate them, New Times has policies for its opinion pages. We require that letters be published with a name and a city of residence. We ask that letters stick to 250 words (but—and don’t tell anyone this—I sometimes let them slide up to 350 words). We give precedence to local writers over out-of-area ones, to timely issues over generic happenings, to variety over sameness. 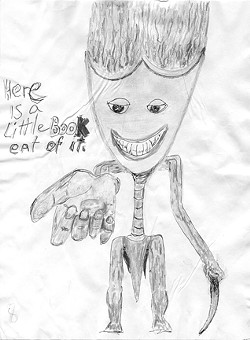 Admittedly, sometimes we allow the rules to be bent or broken. Sometimes opinion pieces that meet all the criteria still don’t make it in, whether from falling through the cracks, getting cut for space reasons, or some other factor. I was telling someone just the other day that assembling the opinion page is less a science and more an art.

Still, I sometimes wish you, our readers, could see the bulk of what comes into our office. We frequently get thick packets of information, some of it typed, some of it written. We get illustrations and cartoons, anonymous and pseudonymous letters (and commentaries, and manifestos), and detailed screeds with footnotes. We get helpful tips, poems in various meters and rhyme schemes, and warnings.

I have a submission, tacked to the wall above my desk, that came with no name or address. Written on the envelope is the message, “When is the closing of your business? Are your mom, grandmam, girlfriends, wives, daughters, female co-workers on sale to be sold to Japan or Korea—the world famous prostitute’s production countries?”

The postmark is from Eugene, Ore. And while I received it in early 2011, the rest of the items on this page came from 2012.

Please, SLO County readers—and beyond—keep sending us all of the above. Know, though, that we’re looking for thoughtful, well-researched, well-written, fun, unusual, insightful, back-up, serious or light-hearted, local, important, irrelevant, irreverent, sobering, funny, smart, community-oriented, and amazing stuff for our paper in 2013. Pitch us your ideas.

Letter writers often use pseudonyms, some more obvious than others. This recent letter—headlined “Don’t Delphi me, Tom!”—could be signed with a real name, but say it out loud a few times to hear the pun:

“Don’t get me wrong; Tom Dawson (“Don’t wait till it’s too late,” Dec. 13) and I probably share values. I voted Tea Party because the Kenyan won’t teach my kids that the earth is flat, and when Mike Brown of COLAB told Save Rural Amerika we don’t own our property, we just live there and pay taxes, I believed him. So when the COLAB patriots prepared a script for us to read to the Board to approve some kind of Ag Clusters deal, I said ‘What’s an Ag Cluster? Count me in!’ I complained about Agenda 21 and ICLEI and a bunch of other stuff and got five friends to do it, too. Now Tom suggests everybody should all look at a website called Agenda 21 for Dummies. I don’t like being called a dummy, so I got wondering if I ought to go straight to the horse’s mouth. Yep, the U.N. has its own website, and it says Agenda 21 is a non-binding voluntary implemented sort of deal providing guidelines for “sustainability.” Couldn’t find nothing about U.N. agents in black helicopters forcibly removing North County residents from the countryside. In fact, reading the document reveals it is drastically less nefarious than Tom reports. I’m starting to think the corporate elite expect to profit from my fear by putting forth United Nations conspiracy theories like this. I need to think about this some, and so should you, Tom.

People choose to not sign letters for a variety of reasons, which, unfortunately, disqualifies them from publication. Here’s one such example, written in response to our coverage of the San Luis Obispo crackdown on homeless people sleeping in cars:

“I want to respond to your recent edition and the lack of a feminine perspective. Thank you, Shredder, for acknowledging that point with the radio, the county supervisors, etc., but there was also a glaring omission in your own paper.

“Many people are struggling with the rising homeless population; we’re not uncaring or callous. But for you to be so cavalier about why residents are not OK with having them park overnight in front of our homes shows a real lack of understanding for women, children, and the elderly.

“Do you think they stay in their cars? That they just drive, park, and sleep? We constantly have problems with homeless people urinating, smoking, leaving their dog’s droppings on our property, using our hoses and leaving the water on.

“Recently, my 10-year-old daughter was taking out the garbage one night when she literally bumped into a man peeing. She ran screaming into the house. Now she is afraid to go outside at all and doesn’t feel safe in her own yard!

“Other people in the neighborhood experience men loitering in the shadows, following them, or just appearing on their front steps. It is very frightening when you open your door and there is someone standing right there. It’s perfectly understandable that men feel able to take care of themselves, but it is a big mistake to project that feeling onto women, children, and the elderly. We have no way of knowing if the man in the shadows is a child molester, a drug addict, or someone just down on their luck. It’s impossible to tell the difference in the dark. No matter who it is, it doesn’t justify the damage that man did to my daughter. …

(Unsigned because I don’t want retribution on me or my children.)”