It’s Saturday, May 27, and I’m in line surrounded by college bros and gals, the latter of whom seem to have apparently called each other this morning to coordinate wearing matching rompers. Also, necklaces made of pretzels are a thing, you know, like the old candy necklaces you could lift into your mouth and munch on. BUT WITH PRETZELS! 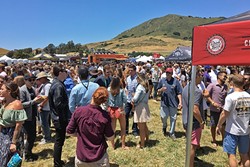 “Man, if we had all the money these kids spent on sunglasses and hair products, we’d be rich!” I tell my wife, who thankfully didn’t get the romper memo.

Oh, I almost forgot. We’re at the 2017 California Festival of Beers, where you basically get in line, wait 10 minutes, get poured a 2-ounce shot of beer, and then immediately get in another line to get another 2-ounce shot of beer 10 minutes later. If you time it right, you should just be finishing your last swallow right as you get to the front of the next line. 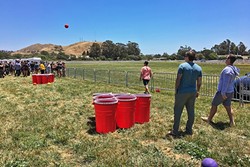 We move along through the throng, and I ask a bro if he’s in line, and he tells me, “I’m using the J.I.C. method, where I’m sort of straddling two lines, just in case.”

It’s a beautiful day and we rode our bikes, so we’re definitely thirsty for beer, but I have to say, I wish I could just get a full-on beer so I could get out of these lines. Luckily I don’t have to use the bathroom. There’s a line for the latrines, too. And the food vendors. Maybe they should have called it the 2017 Festival of Lines.

We wander around and see college kids playing corn hole, and some other college bros are playing beer pong, but instead of Solo cups on a pingpong table, it’s full-size red trashcans and big rubber balls in the field.

There’s a band called Spoon Canoe off to the side on a stage, but only a few people are paying attention. Most people are concentrating on how fast or slow their line is moving.

There you go! It’s practically historic!

My wife and I figure there’s got to be a couple of thousand people here for sure, and since it’s a fundraiser for Hospice of San Luis Obispo County, it’s definitely a worthy cause. Maybe I shouldn’t complain about the lines. After all, when you get to the end of them, they give you beer.

As Martin Luther famously said, “Whoever drinks beer, he is quick to sleep; whoever sleeps long, does not sin; whoever does not sin, enters heaven! Thus, let us drink beer.”