According to my weather app, it’s going to be sunny and 71 degrees in Avila Beach this Sunday, May 25, for the 21st annual Avila Beach Blues festival. Think about that. The sun-drenched Avila Beach Resort looking out on the blue Pacific as a light breeze and a cold beverage keeps you cool as you listen to John Mayall, Trombone Shorty & Orleans Avenue, and headliner Gregg Allman. Yeah, not too shabby.

Mayall, who headlined the inaugural Avila Blues Fest, returns with a new album, A Special Life, that finds the 80-year-old bluesman in surprisingly good form. This rustic, earthy voice is intact, he still plays some mean guitar, but he’s mostly tearing it up on piano, organ, clavinet, and harmonica.

This is Mayall’s first new studio album in five years, and it’s a killer, opening with “Why Did You Go Last Night,” featuring guest star and accordion legend C.J. Chenier. The song was previously written and recorded by C.J.’s father, Zydeco legend Clifton Chenier. 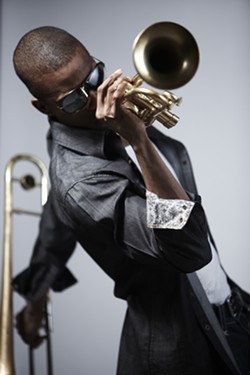 The new album also features three new songs written by Mayall, as well as reworked classic Mayall covers such as Jimmy Rogers’ “That’s All Right,” Albert King’s “Floodin’ in California,” Sonny Landreth’s “Speak of the Devil,” Jimmy McCracklin’s “I Just Got to Know,” and Eddie Taylor’s “Big Town Playboy,” plus a new song by Mayall with Greg Rzab and Rocky Athas—two members of Mayall’s band.

I’ve seen Trombone Shorty & Orleans Avenue a couple of times now, and he injects a lot of contemporary elements into his New Orleans sound, mixing hip-hop, soul, and funk into his horn-driven sound. If you’ve ever watched the show Tremé on HBO, that’s his neighborhood. He’s just 28 years old, but last year he released his ninth studio album, the jumping Say That To Say This on Verve Records. He’s also got four live albums to his credit.

You know you’re big time when your label agrees to put out a two-disc live album with a DVD concert video pairing you with the likes of Don Was, Dr. John, Jackson Browne, John Hiatt, Keb’ Mo’, Martina McBride, Sam Moore, Taj Mahal, Trace Adkins, Vince Gill, Widespread Panic, Zac Brown, and more. That’s the treatment Gregg Allman got on his newest All My Friends: Celebrating the Songs & Voice of Gregg Allman, a live album recorded on Jan. 10, 2014, in Atlanta’s historic Fox Theatre. 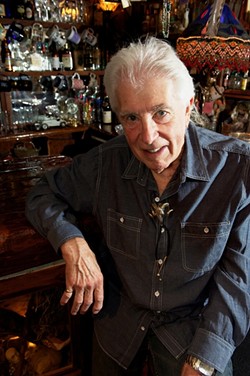 The recording is a reminder of all the incredible songs Allman’s penned over the decades: “Come and Go Blues,” “End of the Line,” “Please Call Home,” “Queen of Hearts,” “Just Ain’t Easy,” “Wasted Words,” “Multi-Colored Lady,” “Ain’t Wastin’ Time No More,” “Win, Lose or Draw,” “Will the Circle Be Unbroken,” and “Midnight Rider,” not to mention all the great covers he made famous.

Gates open at noon, with the show starting at 2 p.m. No outside food or beverages. Bring low-back chairs for lawn seating. Tickets are available at all Vallitix locations, including Boo Boo Records in San Luis Obispo and the Mid-State Fairgrounds Box Office in Paso Robles; on-line at vallitix.com, or by phone at (888) 825-5484.

Husband and wife duos are a dime a dozen, but really good ones are something more rare. File Sarah Lee Guthrie & Johnny Irion in the rare category. Yes, her last name is progeny of that Guthrie, daughter of Arlo and granddaughter of Woody, so she was steeped in music her whole life. Sarah and Johnny began their duo in 2000, about a year after they married. He, too, comes from talented stock. His uncle is author Thomas Steinbeck, and his grand-uncle is John Steinbeck.

On their new album, Wassaic Way, they created ethereal folk pop with rock elements, using Sarah’s lilting voice mixed with thoughtful orchestration to develop a lush and dreamy soundscape. The new album was produced by Wilco’s Jeff Tweedy and Patrick Sansone at the Loft in Chicago. If you remember the Billy Bragg and Wilco collaboration of unrecorded Woody Guthrie songs that resulted in Mermaid Avenue, then you know what a fruitful relationship Tweedy and the Guthrie clan have enjoyed.

Hear the duo on Friday, May 23, at SLO Brew (7:30 p.m.; all ages; $13 presale or $15 at the door). Girls and Boys will open the show. Check the SLO Brew website—slobrewingco.com—for details about the rest of their shows this week, J Boog on Thursday, May 22; Glam Cobra on Saturday, May 24; Katchafire on Sunday, May 25; and Stone Foxes on Wednesday, May 28.

More blues at the beach!

If the Avila Blues Fest wasn’t enough for you, the very next day on Monday, May 26—Memorial Day—The Cliffs Resort hosts a free show featuring Alligator Recording artists Tommy Castro and the Pain Killers, who play at 3:15 p.m.

They’ve recently released The Devil You Know, their first studio album since 2009, featuring Castro’s new lean, mean, stripped down four-piece—a crew that delivers a gritty, hard-hitting mix of down and dirty blues and Memphis soul.

“For the new album, I challenged myself to add different sounds and new rhythms to my style while remaining true to my roots,” explained Castro in press materials. “I wrote using ideas for songs and ideas for sounds in a way I’ve never done before, using drum rhythms to drive the lyrics.”

You can really hear it in tracks like “Center of Attention,” which gallops along right out of the gate: “You always stick out in a crowd. You always talk too loud. You think you’re so unique. Why you always talking cheap? Why you got to be the center of attention?”

There’s a reason Tommy Castro has been doing this for 30 years: because he’s still fiery hot and plays with the abandon of a teenager.

I’ve been listening to Americana, country, and folk rock artist Melanie Devaney, whose new CD Single Subject Notebook is full of immediately catchy songs. She’s got a great voice, and she writes clever lyrics and spunky melodies. She’ll play Buffalo Pub and Grill on Thursday, May 22, at 6 p.m. for free. If you like Shelby Lynne, Lori McKenna, Natalie Merchant, or Dar Williams, you’ll no doubt enjoy Devaney.

Aria and the Gathering Sound play the Shell Café on Thursday, May 22, headlining the Songwriters at Play showcase (6:30 p.m.; all ages; free). According to press materials, “After six years of being a Minnesota singer-songwriter and performing under her full name Aria Souder, Aria has moved west, sharpened her sound, and become Aria and the Gathering Sound.” Guest performers include Minnesotan Jordan Riesgraf, New Zealand’s Anthonie Tonnon, and his friend and sometime New Zealander Julian Temple. Visit songwritersatplay.com for a complete listing of this week’s showcases.

The 4th Annual Avila Beach Party drops the DJ bomb on the beach when Nervo, featuring Miriam and Olivia Nervo, gets the party started on Friday, May 23, at the Avila Beach Resort. The two DJs are the all--time top-ranking female DJs in the world, voted by their legions of fans to No. 16 on DJ Magazine’s influential 2013 “Top 100 DJs” poll. Mim and Liv’s career caught fire in 2009, when they co-wrote the global hit “When Love Takes Over” for David Guetta and Kelly Rowland. Recalling their early years, “Purple hair and purple lipstick; we did it all,” said Mim in press materials. “We almost broke ribs being in the front row of the mosh pit. We were those people in the crowd for so many years, to be playing on the same bills with some of those artists now is just electrifying.” Cash Cash, Manufactured Superstars, and Tasty Treat will also spin. Tickets are available at all Vallitix outlets, including Boo Boo Records in San Luis Obispo and the Mid-State Fairgrounds Box Office in Paso Robles; on-line at vallitix.com, or by phone at (888) 825-5484.

This Saturday, May 24, from 7 to 10 p.m. in the Shell Café, Scott Cooper and Steve Sofranko from the China Cats perform an evening of Grateful Dead music in a rare duet setting. Get your Dead on!

The Cuesta College Jazz Orchestra will deliver an evening of big-band jazz with a vocal showcase this Saturday, May 24, at 7:30 p.m. on the Main Stage of the college’s new Performing and Cultural Arts Center (CPAC). The soloists include award-winning singer and pianist Dawn Lambeth, current Director of Choral Activities at Cuesta College John Knutson, and local singer and trumpet player Mitch Latting. The concert features the music of Frank Sinatra, Michael Bublé, Ella Fitzgerald, and Stan Kenton. Tickets are $7 for students, seniors, and Jazz Fed members, and $12 for general admission. Call 546-3198 or purchase tickets online at www.cpactickets.cuesta.edu. Parking will be free in Lot 2. If you can’t make this show, on Sunday, May 25, from 11 a.m. to 1:30 p.m., the Cuesta College Jazz Orchestra plays at D’Anbino (Admission $10 or $5 Club Members).

Shadowlands will play their final (for now) Steynberg Gallery residency show on Saturday, May 24, after which they will take the summer off to finish recording their debut album, thanks to a successful Kickstarter campaign. “We want to celebrate with you and will be asking for your feedback on which songs you would most like to hear on the album,” the band said. As a special thank you for the community support, they will raffle off a full festival pass to this year’s Live Oak Music Festival, where Shadowlands will perform on Saturday, June 14. All who come to the show will be eligible for the raffle. The $20 show will include Peter Steynberg’s famous curry dinner at 7 p.m. followed by Shadowlands at 8. Call 547-0278 for reservations.

It’s time for the 31st annual Arroyo Grande Strawberry Festival this Saturday and Sunday, May 24 and 25, which is Arroyo Grande’s huge annual street fair and music festival that features 40 performing acts on 11 stages! There’re also more than 400 booths, three carnival areas, and a bunch of wandering street performers. This is fun for the whole family! Frankly, there’s too much to list in this space, so check their website for details (arroyograndevillage.org/strawberry_fest.shtml), but a few highlights include Dulcie Taylor, Catalina Eddy and the Blue Keys, The Crisptones, The Cinders, The Gypsy All Stars, The Mighty Croon Dogs, Blue Moonshine Bluegrass Band, and The Daily Special Bluegrass Band.

Wild the Coyote, an alternative folk rock group with local roots, takes the stage at The Wellness Kitchen and Resource Center in Templeton, on Thursday, May 29, from 5 to 8 p.m. The fundraiser, called “Soul Kitchen,” also features wine tasting and a light meal (gluten and dairy free) provided by The Wellness Kitchen. A $15 donation is requested at the door. All proceeds go to benefit The Kitchen and its goal of providing nutritious meals to those with health issues or wanting to sustain a healthy lifestyle.

What are you waiting for? The Live Oak Music Festival is just three weeks away, happening Friday, June 13, through Sunday, June 15, at Live Oak Camp about 80 minutes south of SLO on Highway 154. This year’s lineup is incredible, and I’m especially excited about J.D. McPherson and Dave and Phil Alvin. Visit liveoakfest.org and learn about all their performers and buy tickets! And watch this column over the next three weeks for more detailed information about this amazing festival, which is great for day passes for those not interested in camping.