Watch an impromptu performance by Brynn Albanese and Duane Inglish at the Live Oak Music Festival.

It’s Thursday, June 12, and I’m pissed off! My wife and I had planned to be on the road to the Live Oak Music Festival by 11 a.m., and it’s now 3:30 p.m. and we’re in stop-and-go traffic on Highway 101 just south of San Luis. Why? Why does everything take so damn long? Getting the camp gear out of the attic. Getting supplies. Stopping to fill up a trio of five-gallon water jugs. Sheesh! And now this damn traffic! By around Five Cities, it’s cleared up, but there were no accidents, no construction, no logical reason for people to have come to a full stop on the freakin’ highway! About 90 minutes later we pull into the check-in line … a line that doesn’t appear to be moving too fast. Thank God I put the ice chest full of beer in an easy place to get to a couple. Whew… it’s good to finally be here, even if takes another 30 minutes before we’re in camp and setting up our spot. It’s great to see old friends, some of whom arrived on Monday to transform this dusty 3-acre grove of oak trees into a little city. At nightfall, we check out the backstage set-up for the performers, and it’s groovy Mad Men-go-camping swankiness. 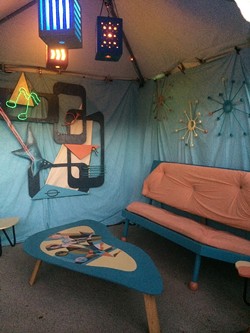 On Friday, we wake up early as a steady stream of attendees pull in to find their spots. I look at their occasionally glowering faces as they cruise through the grounds, and, as usual, some complain that the hundreds of volunteers that make Live Oak possible have claimed all the good spots. As for me, all my tension melted away last night as I shared some beers and a Mexican potluck with our campmates. Today the music starts, and I help set up a few tents as more friends arrive, tucking themselves into our camp.

The first band we hit is The Dustbowl Revival, who just kills it! When the trombone player put down his horn during a Mexican polka number and started singing operatically into the microphone, they had me, and the crowd—wow—went nuts! Dave Alvin and Phil Alvin with The Guilty Ones are tonight’s headliners, and after feasting on one of Spiro’s famous gyros for dinner, we’re back at the main stage for more. It’s so great to see the long-estranged brothers together again, and they sound great covering tunes from their new Big Bill Broonzy tribute album. Was I really that angry and frustrated just 24-hours ago? Because wow, I’m pretty relaxed now!

Saturday morning I head to the Hot Licks stage to see Shadowlands, who unveil several new songs I haven’t heard, my favorite being “When You Said No.” Such a great chorus! This is a band with so much range and texture! They’re SLO Town’s next big thing! Thanks to ACORN Radio, the micro station broadcast across the campground, even when we’re chilling in the camp, we can still listen on to what’s happening on stage. Blind Boy Paxton starts late but sounds great, and I make the last few Sarah Lee Guthrie & Johnny Irion songs live while picking up 2014 Live Oak T-shirts for the family at the mercantile. We chill at camp until 8 p.m., when we wander down to Stage Too for The Monroe, the amazing R&B and soul from Atascadero that won Best Live Performance and Best R&B song at last year’s New Times Music Awards. We have to leave before they’re done because the act I most wanted to see, JD McPherson, plays the Main Stage at 8:45 p.m. He doesn’t disappoint, and I sing and dance along to the music I’ve been listening to for the past 18 months. I hear some new stuff, too, which makes me hope he’ll be back in the studio soon. His roots rock feels like the real thing, like it’s 1950 and I’m hearing this sound for the first time.

On Sunday morning, I’m in total chill mode, shuffling my filthy sandal-clad feet around camp without a care in the world. Everybody I meet and see has a shit-eating grin on his or her face. Kids are running and having fun. The sun’s out and the weather’s perfect. We’re sitting around camp when Duane Inglish and Brynn Albanese of Café Musique wander into our outdoor living room and starting playing duet versions on accordion and violin of their Gypsy jazz and swing music. This is pure Live Oak magic, exactly what I come for every year. I know tomorrow morning I’ll have to pack up camp and load up the truck and drive home dirty and tired, but a moment like this makes it all worth it.

SURPRISE SERENADE! When Café Musique's Brynn Albanese and Duane Inglish played an impromptu performance at our camp, my Live Oak experience was complete!