Hey look! Two of my favorite things! Next weekend, from Friday, July 11, through Sunday, July 13, El Chorro Regional Park & Campground will once again be transformed into a craft beer and music lovers’ paradise hosted by our own Tap It Brewing Company.

Called the Seven Sisters Craft Beer & Music Fest, it features more than 40 craft breweries dishing out their tasty wares on Saturday, while a dozen performers provide entertainment all weekend long. There’s on-site tent and RV camping, local food vendors, and more. You can buy day passes or get full festival passes. Visit sevensistersfest.com for tickets. Let’s break it down day by day.

On Friday, July 11, music starts as 4:15 p.m. with the Alastair Greene Band. Greene formed his first blues-rock trio in 1997 with former members of the legendary Pontiax, but over the years his revolving recruits have included alumni of the Steve Miller Band, the Paul Butterfield Band, and the Junior Wells Band. Next up is the Volker Strifler Band at 5:45 p.m. This amazing guitarist works in a blues-roots style, while incorporating elements of rock, jazz, and Latin rhythms. Kim Simmonds and Savoy Brown take the stage at 7:30 p.m. This blues-rock institution was among the earliest British blues acts and helped launch the 1967 UK blues movement, which in turn heavily influenced ’70s rock music. The evening ends with a set by California roots rockers The Rayburn Brothers Band at 9:15 p.m. On their new album, Back to California, you’ll hear shades of rock, folk, reggae, and jazzy blues.

On Saturday, July 12, Zongo All-Stars start the day off right with their CaliCubano music starting at 12:15 p.m. Their new CD, appropriately titled CaliCubano, features nine of their highly danceable, polyrhythmic tracks. They recently won Best Local Band (again!) in the New Times Best Of Readers’ Poll. These guys will kill it! Raquel Rodriguez continues at 2:45 p.m. This amazing L.A.-based soul singer is backed with a tight seven-piece band, and Rodriguez’s gritty song “Already Beat” appeared in the television show Sons of Anarchy. Jazz-tinged and blues-soaked, the Chris Cain Band takes the stage at 5 p.m. to deliver some blistering blues guitar. Mingo Fishtrap continues the fun at 7 p.m. Texas Music Magazine describes them better than I could, describing their music as “the space where melodic pop meets gritty Memphis soul, with a twist of N’awlins funk.” The Damon Castillo Band closes out the night with their urban jazz, soul, and R&B on the stage at 9:15 p.m. Their new album, Mess of Me, is a great collection of Damon’s literate, emotive, and highly infectious songs.

The Dead Winter Carpenters kick off Sunday, July 13, with a 10 a.m. set. They blend Americana roots rock with straightforward “tell it like it is” alt-country. At 11:45 a.m., check out the David Mayfield Parade. Mayfield has performed with The Avett Brothers and Mumford & Sons, and he’s always got some surprises up his sleeve. The Infamous Stringdusters close out the festival with a 1:30 p.m. set. These guys start at the borders of bluegrass and stretch out from there.

The main beer tasting happens on Saturday from noon to 4 p.m., and breweries such as Bang the Drum Brewing, Barrelhouse Brewing, Beachwood Brewing, and a whole bunch more will be offering samples. If wine’s more your thing, there will also be a boutique wine tasting happening at the same time.

All Vallitix outlets, including Boo Boo Records, have tickets, or get them online at vallitix.com, or call (888) 825-5484, or just go to the Tap It tasting room, drink a beer, and buy your ticket! And, feel good because nonprofit beneficiaries include Woods Humane Society and the Infinite Music Foundation. 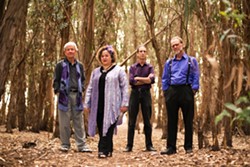 Tucson-based Human Behavior is rolling into town for a Thursday, July 3, show at Linnaea’s Café (7 p.m.; all ages; free). The self-described “gloomy folk-orchestra” recently released their first full-length album, Golgotha, and is touring the country to bring its sound to new, eager ears. Lead singer Andres Parada wrote songs he describes as “dealing with the guilt of Catholicism, atheism, suicide, and depression.” He says the album features mostly untrained singers, inspired by his belief that “the better you sing, the harder it is to believe you.” MeWithoutYou, Bonnie “Prince” Billy, Moldy Peaches, Bright Eyes, Andrew Jackson Jihad, and CocoRosie are a few comparisons. Go embrace your insecurities!

Happy Birthday, America! You’ll be happy to know, America, that the Village Summer Concert Series is once again going to throw you a kick-ass, family friendly party to end all parties this Friday, July 4, with patriotic music from the ever-popular Village Band, starting at 1 p.m. at the Rotary Bandstand in the Village of Arroyo Grande. The South County Historical Society will provide traditional red, white, and blue decorations, period costumes, and delicious American barbecue. “Linda Osty will again have a table set up with postcards to fill in to send to U.S. troops stationed overseas,” according to organizers.

SLO Town’s Concerts in the Plaza has a double-header cooked up for you this Friday, July 4, with two of our finest local acts! The Mission Plaza will be open for business starting at 2:30 p.m. Remember that local vendors sell snacks and food for hungry concert-goers while Firestone Walker Brewing Company and Edna Valley Vineyard supply beer and wine for purchase. Non-alcoholic beverages are available as well at this family-friendly event. But, no outside alcoholic beverages or pets are allowed, and there is no smoking (this is SLO Town, right?). You’re also asked to please refrain from placing chairs and/or other material on the grassy knoll before 11:30 a.m. Próxima Parada will play their pop-inflected soul, blues, and Americana from 3 to 5 p.m. Then, Cuesta Ridge will deliver their patented brand of California Jamgrass from 5:30 to 7:30 p.m.

“We’re hanging out in the North County again this weekend at one of the finest wineries in our region,” Back Bay Betty said. “Come out and hear the latest BBB originals classics and funky blues (always somethin’ new to dance to) while you taste Broken Earth’s fabulous wines and enjoy lunch at their Gusto Gourmet Market & Cafe. We will be funkin’ it up a notch with special guest Eric Stever on sax, so this is one show you won’t want to miss!” The show runs from 1 to 4 p.m. this Saturday, July 5.

Café Musique plays at Red Barn Community Music Series this Saturday, July 5, and what a wonderfully intimate setting to see this amazing gypsy, tango, classical, and fold act! There’s a 5 p.m. potluck, and the show starts at 6 p.m. ($10 to $15 donation requested at the door … and worth every penny!). This is, without reservation, one of my favorite bands anywhere! Their level of musical expertise, their inventive arrangements, and their surprising depths of humor, and raw emotion combine for an unforgettable live music experience. Not to mention, their recordings are equally as good. Their third album, Half Step Behind, is just crazy good! Joe Craven, Louie Ortega, and Jill Knight are a few of the guest artists that appear on the record. This is going to be a great show! 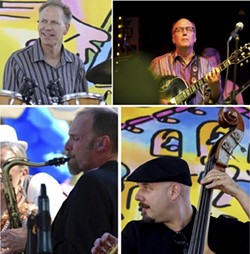 The Irene Cathaway Rhythm & Blues Band will appear at D’Anbino Vineyards & Cellars tasting room on Saturday, July 5, from 7:30 to 10 p.m. ($10 admission; $5 for club members). “Led by one of the most extraordinary singers you have ever heard, Irene has been singing blues and (old-style) R&B for decades,” organizer Carmine Rubino says. “She’s backed up by a trio consisting of Dorian Michael on guitar, Ken Hustad on bass, and Bill Severance on drums.” Call 227-6800 for reservations. Appetizers, sandwiches, and salads by Just Between Friends will be available for an additional cost.

The Land Conservancy of San Luis Obispo County is hosting a free outdoor concert to benefit the Pismo Preserve this Sunday, July 6, at Dinosaur Caves Park in Pismo Beach from 11 a.m. to 5 p.m. Eight-piece Big Daddy’s Blues Band kicks things off with a smoking blues set. Then contemporary jazz act, the Darrell Voss Quartet, takes the stage, followed by headliner Nils, who has intermittently been No. 1 on the national jazz charts over the last few years. Gravity 180, led by composers Harold Payne and Clydene Jackson, will take the stage at 4 p.m. “with a unique, melodic pop and soul sound,” organizers say. “Nils will join Gravity 180 for a reunion jam-session to close the show.” In between acts, short presentations on the Pismo Preserve project and exciting announcements will be made by Pismo Beach elected officials and other surprise guests. The event will raise awareness and funds for the organization’s effort to acquire and permanently protect the Preserve, which encompasses nearly 900 acres with 10 miles of hiking, biking, and horseback riding trails with some of the most scenic vistas on the Central Coast. “The project has reached 60 percent of its target goal with a high level of confidence that committed and probable grant funds bring the project within $600,000 dollars of the $12 million dollar goal which must be raised through community donations by close of escrow at the end of August,” organizers added. “During this Sunday’s event, anyone interested in making a donation towards the Pismo Preserve project will be able to match their donation dollar-per-dollar up to $25,000. This challenge match was pledged by generous Land Conservancy supporter and South County local, Mike Fray, new owner of Harry’s Night Club & Beach Bar in Pismo Beach.” 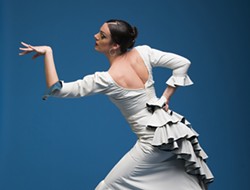 Feel the fiery rhythms of authentic flamenco when Seattle-native Savannah Fuentes presents La Luna Nueva—“a presentation of Spanish Flamenco music and dance featuring special guest artist, direct from Spain, world-renowned Flamenco singer Jose Anillo,” according to Fuentes. “Jose Anillo has toured professionally since the age of 16 with esteemed flamenco artists such as Belén Maya, Joaquín Grilo, Israel Galván, Javier Latorre, and Rafael Campallo, among others.” The event happens on Monday, July 7, at 8 p.m. in the SLO City Library Community Room. Tickets are available online at brownpapertickets.com or by calling (800) 838-3006 (kids $10, students $15, general admission $23, VIP reserved seating $35, and general admission at the door for $25).