The 805 fight racket: Knock Out Boxing Gym in Paso Robles 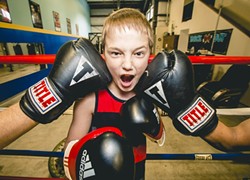 A boxer lives a thousand lives. When you’re getting hit in the face, a three-minute round can feel like 30 minutes. The fighter’s minute is imperious: It makes itself as big as it can, puffs out its chest and flares its nostrils. In a fighter’s minute, each second exists more fully and pronounced than a civilian’s second. It’s between the seconds where the fight lives. Where the fist meets the skull. Where decisions are made. Also between the seconds, lurking in the shadows: victory and defeat.

Adriel Pebenito knows about those brutish seconds that exist inside the ropes. Wearing gloves since he was 5 and fighting since age 12, Pebenito carries almost 30 years of fight minutes. And that’s a lot. Pebenito is owner and head coach of Knock Out Boxing Gym in Paso Robles, where he prepares fighters for the ring with jabs, upper-cuts, and right hooks so nasty they’ll have you wishing you’d stayed home on the couch. Knock Out is Pebenito’s first entrepreneurial endeavor in the boxing world. He’s served as assistant coach and head trainer at other establishments in past years, both here in San Luis Obispo County and in Louisiana during his military career.

“The reason why I got into this is because I was able to watch a whole bunch of other businesses rise up to the top, you know, and everybody sees them, and then I watched how they failed. But I did see the things that work. So I wanted to go ahead try it myself,” Pebenito explained.

Pebenito opened doors to the gym in early 2013. The space was small but served its purpose; it was apparent that SLO County residents were hungry for the fight. With the dawn of 2014 came a new facility, with three times the space for fighters to train. The facility boasts multiple heavy bags, speed bags, weights, cardio machines, and a regulation-sized ring. In the few weeks since moving to the new facility a boxing community has surfaced, and Knock Out has become the central meeting place for fight teams and fight fans to get their fix. Knock Out has begun to host open sparring sessions on Saturdays, giving other training operations from around the area the opportunity to move around in the ring. Pebenito enjoys being the director of these events and welcomes some healthy competition: “If other boxing gyms open up, then that’s good, too. That’s even better, because you have more competition and you get to work things out differently.”

Pebenito aims to blend passion and hard work to raise boxing above the perception of being just a sport. He loves the freedom from a suit and cubicle.

“My favorite part of my day is when everybody gets out of school, everybody gets off of work, and they come into here and I have a gym full of sweaty, stinky people. I kind of crave it. And it makes me happy. The more stink the better, I guess,” he said, smiling.

Growing up in the gym molded Pebenito into a true master of analogy; everything he knows about life he learned from boxing.

“Learn how to adjust to the way things are,” he says. “I’m small, everybody else is big, I gotta punch harder, I gotta move faster. [T]here is always going to be someone one step ahead of you in some area, so the only way to overcome that is to be prepared physically and mentally in every direction.”

Knock Out welcomes men and women, with any level of athletic ability and boxing experience. Whether you’re a seasoned fighter looking for a space to train, are interested in competing, or are just looking for a new way to exercise and have fun, there is something for you here. Even kids ages 10 and up are welcome to join. For all those who mention this article, Knock Out is offering a $10 discount on registration fees.

The 6th Annual Friends of the Prado Day Center Culinary Carnival takes place Feb. 27, 5:30-8:30 p.m. at The Embassy Suites ballroom, 333 Madonna Road in SLO. Tickets coast $60 per person and are available at sloculinarycarnival.com/buy-tickets.html.