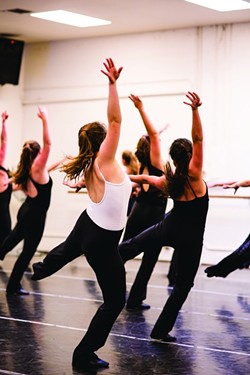 “I can take any empty space and call it a bare stage. A man walks across this empty space whilst someone else is watching him, and this is all that is needed for an act of theatre to be engaged.” This is how the great stage director Peter Brook opens his treatise on performance, The Empty Space. This is not only a reduction of the concept of performance to its essential elements, but a plea to fill the surfeit of space and time that surrounds us—to “infuse” it with meaningful action.

Every year, the Academy of Dance, SLO, engages in such an act of performative alchemy with their showcase known as Infusion, designed primarily to feature the San Luis Jazz Dancers but also including appearances by the Academy’s younger jazz/modern performing groups. Directed and choreographed by Academy of Dance instructor Michelle Epperheimer, with additional numbers choreographed by Ryan Lawrence, Drew Silvaggio, and Elena Lorton-Smith, Infusion is the culmination of each dancer’s year of work and, in the case of graduating seniors who will be leaving the area, of their career as Academy students.

Sitting in on a recent rehearsal, it’s clear that the show’s driving force is unremitting energy. The cast move as one body, then just as fluently they break into individual performers with discrete motivations. This is a company with the kind of immediate rapport that comes from years of experience and familiarity. Epperheimer’s choreography finds strength in simplicity, allowing the dancers to give their best interpretations of the genre’s vocabulary of motion.

As with any good jazz/modern ensemble show, the pace is fast but not hurried. Brook may have envisioned actors walking across a stage, but these dancers run. Their percussive clapping—the only “voice” heard in the show apart from the score—hearkens back to the musical origins of jazz. The casual, loose vibe of Infusion’s opening belies the precise coordination behind each movement, which despite being a cliché of dance is striking every time it’s effectively accomplished. 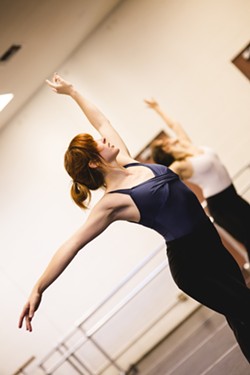 “Every movement matters,” Epperheimer calls out over the music. The dancers adjust the slightest details in response—a position of the fingers, a facial expression, a tilt of the head. These small victories elevate a dancer from a body executing a specific set of instructions to a character in her own story of movement.

During a break in the rehearsal where intermission will be, New Times’ photographer Henry Bruington assembles the dancers into a tableau that, from the sidelines, might have been called “Henry and the Girls.” They laugh as he assembles them into an easily-photographed mass in the middle of the rehearsal floor, his own slim figure echoing theirs. This particular performance won’t be available to audiences who see the show on June 1, but the spirit that animates the dancers’ every spontaneous reaction to Bruington’s directions is the same one they’ll bring to the Spanos Theatre stage.

The second act continues to present rhythmic variety while maintaining an energetic pace. The professionally fabulous Drew Silvaggio’s contribution to the show, “Alibi,” exemplifies his two sharpest senses—his sense of story, and his sense of abandon. The number begins with French chanson and transitions into something more evocative of performance art than traditional jazz/modern. Tense moments of non-movement are broken by carefully timed reignition of the physical machine Silvaggio creates.

If Silvaggio’s piece is the emotional highlight of the show, Epperheimer’s “BWB” or “Bach Works Variations,” is its intellectual and aesthetic highlight. A structured improvisational piece, it is achieved by giving the dancers choreography that they are then asked to execute at a tempo of their choosing. Within this structure there is also some allowance for complete improvisation at certain points. The union of classical music with the very modern feel of the movement style evokes a far-reaching history of the genre, from the traditional ballets nestled within operas to the contact improvisation of 1970s dance happenings. This oscillation between formality and freedom takes us inside the romance of the process—we seem to be seeing the dancers as they exist between performances, idling in a dressing room or properties closet, waiting to be awakened once again and put to use.

“Everyone has a purpose,” Epperheimer reminds the dancers as they take their positions. This is true for the performance, of course, but also something that these dancers will carry with them throughout their lives—not just purpose of movement, but purpose of being.