For fans of the Beach Boys, and 1970s rock in general, Beach Boys drummer Dennis Wilson’s solo album Pacific Ocean Blue is something of a holy grail for record collecting. The 1977 record, though fairly well received at the time of its release, quickly went out of print and was never re-released … until now: A special two-CD set hit the streets on June 17. Thanks, in part, should be directed to Los Osos author Jon Stebbins, who in 2000 released his first book, The Real Beach Boy, a biography of Dennis Wilson. 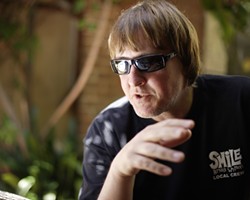 “I will take a certain amount of credit for getting the ball rolling from a fan side, and it certainly helped revive interest in Dennis when the book came out in 2000,” admitted Stebbins, a lanky father of two who sports a Beatlesque bowl haircut with a few wisps of gray hair starting to show.

Stebbins, who also wrote some of the liner notes for the new release, never intended to become the de facto expert on Dennis Wilson. It just sort of evolved naturally.

“I was just a fan. My sisters—Carla and Tina—brought home all those records when I was a kid. I specifically remember my sister Carla bringing home Surfin’ USA and The Freewheelin’ Bob Dylan on the same day—two of the most amazing records of all time. My sisters were teenagers when I was in grade school, and I remember listening to all those classic albums by the Beach Boys, the Doors, Hendrix—they had all of them.”

Stebbins has always been a little music mad. At one point his record collection had swelled to somewhere near 20,000 albums—today he’s culled it down to about 1,000 “essential” discs. In the late-’70s, he was a musician in Hollywood and even met Dennis Wilson before his untimely death in 1983 at the age of 39.

“I met Dennis in 1978, and even though he was quite a bit older than me, he was just like one of the guys from my hometown. Yes, he was a big rock star, but he acted like some garage band guy.”

Dennis had released Pacific Ocean Blue the year before, and Stebbins says he was “really knocked out” by it, calling it “dark” and “heavy.”

“The ballads are very dark. Listen to ‘Cocktails’ on disc two. It’s like he’s bleeding onto the tape. It’s like a therapy session. And you’ve got to remember that when this record came out, the Beach Boys were kind of pass». Punk rock was the big thing. But Dennis’ album didn’t sound like anything else out there. I remember walking around with a stack of sealed copies, telling my friends, ‘This album is really heavy. You’ve got to hear it.’ I was just a big advocate.” 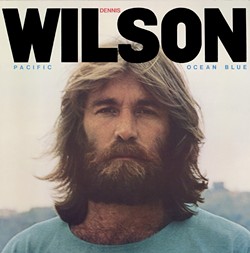 Advanced copies of the re-issue have already been garnering stellar reviews in the international music press. Uncut awarded the set five stars, Mojo gave it four, Record Collector gave it five, the London Observer gave it five, Blender gave it four, and Rolling Stone is purportedly coming out with a stellar review, as well. It seems like the contemporary music press is finally realizing what Stebbins knew all along: Dennis Wilson, the only actual surfer in the Beach Boys, the underappreciated drummer for the band, the Beach Boy voted most likely not to come of anything, was actually a musical genius just like his brother Brian.

And Stebbins seems to have been the perfect guy to carry this news to the masses. He has simply always had an affinity for the Beach Boys, born of a combination of love for their music and an understanding of their upbringing.

“I grew up in Livermore, which like [the Wilsons’ hometown of] Hawthorne was a suburban community, so I could really relate to their situation. I have no idea what it was like for John Lennon or Brian Jones growing up, but I knew exactly what it was like for Dennis Wilson because his childhood was just like mine.”

When Stebbins first began researching for The Real Beach Boy, he wasn’t exactly greeted with open arms by Dennis’ family and friends. Dennis’ life was fraught with trouble—four wives, alcohol and drug addictions, reckless behavior, less-than-respectable friends (Dennis lived briefly with Charles Manson prior to his cult slayings). Naturally they were hesitant to reveal the sordid details of Dennis’ difficult life.

“To write the book, I pretty much had to hang out with the people who knew Dennis, who were around him—his friends, his family—and I examined all the materials and documents that had been archived.”

Slowly, as Dennis’ family and friends got to know Stebbins and realized he wasn’t going to write a sensationalized or torrid biography, they began revealing more and more unknown details of Dennis’ life. Many of the revelations never made it into the book, largely out of respect for Dennis’ family, but with the release of Pacific Ocean Blue, Stebbins’ book The Real Beach Boy has become more important than ever as the authoritative biography of Dennis Wilson, so much so that it will be re-issued later this year in an expanded version, with more text and more photos.

“As far as the family goes, I’ve built up a lot of trust with them, and I think they really appreciate what the book did for Dennis. He was a tragic figure with a good heart, and maybe if they had better treatment for addiction back then, things might have turned out differently.”

“Almost nine years after this book came out, I’m stilling talking about it, still being interviewed about it, but I’m most happy about this CD being reissued. It’s a big deal, man. The reviews have been stellar; there will be a Grammy campaign for it. I’m especially happy for Dennis’ family. If someone had told me ten years ago that all this was going to happen because of a book I wrote, I wouldn’t have believed it.”

Learn more about Jon Stebbins and his projects at www.thejonstebbins.com.

Glen Starkey isn’t writing a book. Thank him at gstarkey@newtimesslo.com.