Glen Since cartoonist Charles Addams debuted his comic in The New Yorker in 1938, his macabre family of eccentrics has found its way into a beloved TV series (1964 to 1966), an animated TV series (1973 and again from 1992-'93), a couple of popular films—The Addams Family (1991) and Addams Family Values (1993)—a direct-to-video film (1998) that spawned another TV series (1998-'99), and a musical (2010). Now we have this animated film that seems to be aimed squarely as the nostalgia center of parents who may have seen reruns of the '60s TV series or the '90s films starring Angelica Huston as Morticia and Raul Julia as Gomez. If you're that parent, feel free to haul your tykes into the theater, but don't be surprised if you find yourself napping. This is pretty pedestrian stuff—a paint-by-numbers story about being yourself even if you're different. It opens in the old country, where the Addams' neighbors are finally fed up with their weirdness. Soon they're run off and head to a place where they hope they can raise their children, Wednesday (Chloë Grace Moretz) and Pugsley (Finn Wolfhard), in peace. They go to a place "no one would be caught dead in": New Jersey. The plan is working perfectly as they've lived in peace for 13 years. Pugsley is about to have his coming-of-age sword ceremony, the Mazurka. The various members of their extended family are due to arrive. Then the fog around their abandoned asylum/home lifts, and the townsfolk below can see the dilapidated structure, and worries about declining property values bring the Addams in contact with their neighbors, including obnoxious reality TV host Margaux Needler (Allison Janney), who's trying to create the perfect community. Predictability follows. 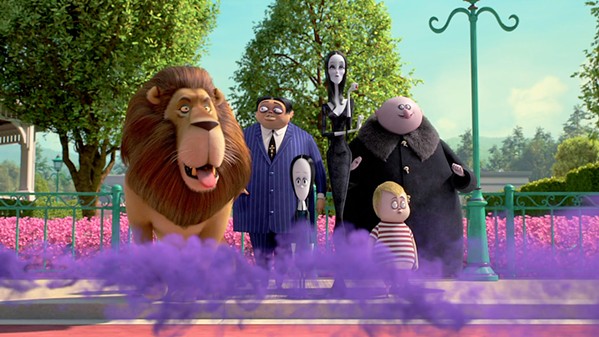 Anna TV Land brought the eccentric Addams onto my radar as a kid, and growing up in the '90s meant I couldn't have missed the feature films if I had wanted to. Which, who would? They were great! There is definitely a place in my heart for the ghoulish group, but even that nostalgic sentiment couldn't save this animated version from falling flat. It wasn't akin to the TV show or past films, it relied far too heavily on the same jokes, and the storyline was less than interesting. Wednesday is coming into full teenager mode, pulling away from her family and rebelling by asking to go to public school and wearing a pink barrette in her hair. She's found a new friend in Parker (Elsie Fisher), Margaux's daughter who like Wednesday doesn't fit in but cares a lot more about it than her new cohort. There's some struggle between Morticia and Wednesday; the mother-daughter bond is on thin ice with Wednesday's new lifestyle. It's all so terribly predictable that in the end it all feels a bit pointless. There are some funny moments—Uncle Fester (Nick Kroll) is a welcome jokester as well as the butt of a bunch of physical mishaps. Janney pulls off the obnoxiously big-haired and diabolical Margaux, making it easy to hate the shrill home improvement reality star from the start. I'm betting the narrow gap for this film lies somewhere around 7 years old. Younger kids may find it too ghoulish, and older viewers will soon become as bored as we were.

Glen Kroll as Uncle Fester was certainly a highlight. He really channels Jackie Coogan, who played the character on the '60s TV show. In fact, the entire cast has talent galore. Bette Midler plays Grandma, Martin Short is Grandpa Frump, and Catherine O'Hara is Grandma Frump. Snoop Dog is in a throwaway roll as the voice of Cousin It, but it's still fun casting. I imagine he was high as a kite during his minimal voice work. Despite the talent, the story is too blah to elicit much interest. You know what's going to happen from the outset, that Wednesday and Parker will find a way to get along and triumph over the mean girls. The animation is pretty good, and the characters really harken back to the original comic strip. The problem is the film's one-note feel. Lines like these—"Are you unhappy darling?" "Terribly!" or "Come in. Make yourself uncomfortable"—grow stale quickly. I laughed out loud a few times, but I dozed off more often than I laughed. Maybe your kids will be amused, and it's thankfully a brief 87 minutes. If you're longing to revisit the TV series, some episodes are available online, or you can rent the '90s films. I would have been perfectly happy to have skipped this one.

Anna Same here. The animation was pretty cool, but it couldn't carry the movie on its own. I can see kids wanting to check this one out, and what better time than Halloween? But unless the little ones were begging to see it on the big screen, I'd leave it for home viewing where you can happily walk out of the room if it isn't entertaining you. Like you said, the cast is nothing but talent—they just aren't given much to do with it here. The lesson the film is trying to teach is a good one: Being yourself is better than trying to be someone else, and fitting in doesn't always feel right—all good things for kids to be reminded of—I'm just not sure it's worth the hour and a half for parents to sit through. I do have to say I also laughed quite a bit at the character Lurch (Conrad Vernon). The bumbling monster can play the organ, reads classic literature, and dresses like a fine gent. He's a lot of fun, but alas not enough to rescue the storyline. If you have kids the right age, this one may be worth a rental; otherwise, I wouldn't bother with it. Δ