It’s Friday, Aug. 14, and I’m Alabama Shakes-bound with my wife, Anna; my buddy Keith Bond; and my editor Camillia Lanham. It’s pretty smooth sailing except for the inexplicable traffic jam between Shell Beach and Arroyo Grande, but in no time we’re cresting the top of Highway 154 and heading downhill toward a sun-baked Santa Barbara. The hills are drier than Steve Wright’s antiperspirant, but my SB buddy Michael Allen says the beers are wet and the food’s good at The Shop Cafe, which is just a few blocks away from the Santa Barbara Bowl. 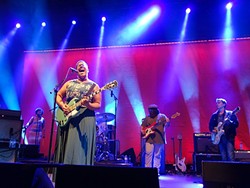 We arrive about 5:30 p.m., settle in on a picnic bench on the patio, and I start to sweat because it’s about 110 degrees in the sun. Thank you, Pabst Blue Ribbon tallboy for saving me as I wait for my burger and fries. Another round of brews later and we’re marching up North Milpas toward the venue.

“It’s just a couple of blocks,” says Mike, the dirty liar! We’re walking and walking. I’m sweating and sweating. Finally we get to the venue parking lot just in time to wait in line at will-call for our tickets. Then it’s more hiking up to the actual venue. Then it’s more waiting in the beer line. Meanwhile, I can hear the opening band—Chicano Batman—doing their thing on stage.

The Bowl is a beautiful spot, nestled against a tree-dappled hillside, and we scored some pretty sweet seats—thanks, Nederlander Concerts! Chicano Batman is making some interesting music, but it’s clear everyone’s here for the Alabama Shakes, a band that seemed to have come out of nowhere in 2012 when ATO Records released their debut album Boys & Girls. Its hit single, “Hold On,” garnered three Grammy nominations, and soon the band was making its rounds of late night TV shows and playing major festivals like Bonnaroo and Lollapalooza.

They’re currently touring in support of Sound & Color, a decidedly more shoe-gazer album, but it still has some great singles like “Don’t Wanna Fight” and “Gimme All Your Love.” When the band finally hits the stage, the now full house goes nuts!

Lead singer Brittany Howard owns the stage! It’s clear music feeds her soul, and she sends her energy generously out into the crowd. As a heavyset black woman growing up in the South, I imagine Howard’s childhood was a challenge. As she told Paste magazine, “I wasn’t a cool kid but I wasn’t a nerd either. I had trouble finding my place. But when I found the music, I had a place of my own.”

She seems supremely confident on stage, putting her band—people she’s played with since high school—through their paces. Some have compared Howard to Janis Joplin, but she mentions AC/DC singer Bon Scott and Nina Simone as her influences. Regardless of who you compare her to, Howard’s got a lot of soul, and her music ranges from punk-blues to alt-rock to garage-gospel. 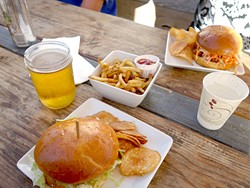 Soon it’s closing in on 9:40 p.m., and the Bowl—situated in a residential neighborhood—has a 10 p.m. curfew, so the band members take their bows and exit the stage, but the audience isn’t leaving, and soon everyone’s on their feet, clapping and screaming for more, and waving their lit-up cell phones like lighters.

The band returns for a few more, but time is short, and soon Howard announces their last song. 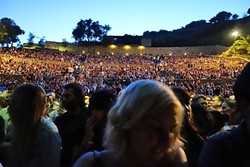 We believe her, but the final note sounds, the house lights come up, and like a herd of 4,500 head of cattle, we slowly make our way out, down the hill, and into the warm night, having witnessed the transformative power of music. 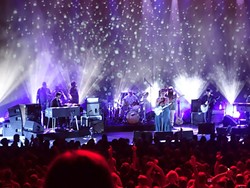