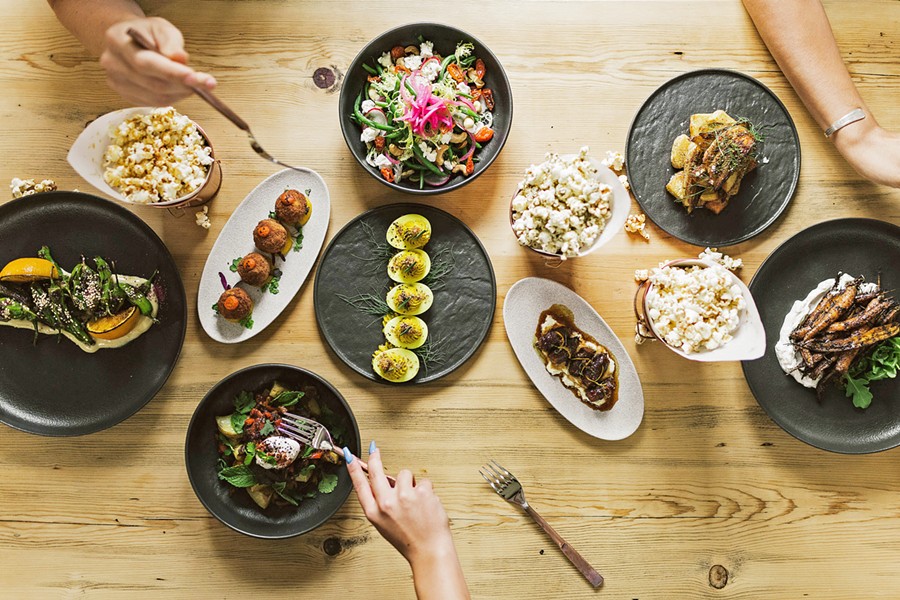 Dinner and a show

The Alchemists' Garden in Paso Robles is open Sunday through Saturday from 4 p.m. to 1:30 a.m. at 1144 Spring St. Check out the menu by visiting alchemistsgarden.com. Salivate over their offerings on Facebook and Instagram @alchemistsgardenca.

Cinnamon sparks as the spice hits flames shooting off half a lime doused in Bacardi 151.

Smoke wafts out of a oblong wooden box as the lid slides off it, revealing a rocks glass waiting for pickup.

A purple orchid balances just so in the froth of egg white topping pinkinsh hues contained in an old-school champagne glass.

This is the show that comes with dinner. Sitting on the back patio of The Alchemists' Garden, my friends and I are lost in our own world. Exactly as it should be. We lean back as plates start to fill up the space between us.

Sounds good, right? It was.

We picked up our forks, nibbling, talking, sharing, declaring love for this or that.

And that's the goal. It's the vibe The Alchemists' Garden is putting out into the North SLO County universe, one cocktail, one plate, at a time. 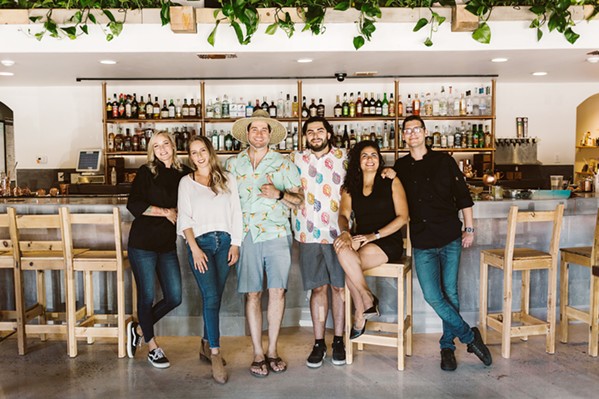 "All of our dishes are made to share," co-owner Quin Cody told me earlier. "So it can be kind of a nosh experience. And you can sit and nosh around good, high end cocktails until 1:30 in the morning."

Cody said she and her fellow co-owners—husband, Tony Bennett; Alexandra Pellot; Andrew Brune; and Norin Grancel—wanted to create a space where industry could come after hours, the cocktails were fabulous and creative, and so was the food. As service industry veterans, the partners met in Paso restaurants and bars, worked together, dined together, drank together, and eventually dreamed together.

They realized they all had the same dream, Cody said, when they were in Pellot's hometown in Puerto Rico for the infamous bartending event Tales on Tour—a Tales of the Cocktail festival—in 2019.

Now, they've built a restaurant together in the space that once held Villa Creek in downtown Paso Robles. White walls, exposed concrete, and copper accents contrast with plants tucked away in corners and on shelves, growing out of chandeliers hanging from the ceiling. 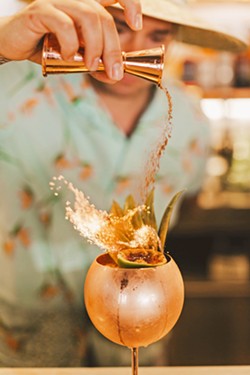 Like any crew that spends an inordinate amount of time with one another, they all have nicknames. Grancel, who takes more a hands-off but supportive role, is The Dream Enabler.

Pellot, who opened the bar program at Allegretto Vineyard Resort, is the Ring Leader and Master of Mayhem. She handles human resources and scheduling, keeping everyone on track and pointed in the right direction. Bennett and Brune, who run the cocktail program, are the Cocktail Wizard and Ambassador of Buzz, respectively. Bennett started 1122 Cocktail Lounge's bar program, and Brune continued the cocktail inspiration at Allegretto after Pellot became the restaurant and then food and beverage manager at the resort. Cody, who also spent time at Allegretto, is the Oracle of Inspiration.

"We all bring different skill sets to the table and we work off of our different strengths," Cody said. "When you're on the same page as far as what the goal is and you know that you work well together, there's not really anything that can stand in your way. ... Well, I mean, other than COVID, but we seem to have pulled it all together."

Initially, the COVID-19 pandemic seemed like something that was happening far away, Pellot said. Things picked up speed for the crew at the beginning of the year, and they got serious, signing paperwork around the time the virus hit the Central Coast. As everyone in the restaurant and bar industry starting losing their jobs, The Alchemists' Garden was becoming a reality.

Although it was scary, Pellot said the timing might have been a blessing in disguise.

"We were 100 percent unemployed, so we were able to scrape the floors and do a bunch of stuff that needed to be done rather than paying other people to do it," she said. "It was hard work, but it saved a lot of money."

Pellot describes the process as similar to a fun roller coaster. With any close working relationships that turn into family, there are ups and downs, but at the end of every day, they all love each other and are passionate about making their collective vision a reality.

The Alchemists' Garden brings big city cocktail bar vibes to Paso. Pellot described it as akin to Death & Company, a cocktail bar with spots in Los Angeles, Manhattan, and Miami.

When she was in LA, she went in for a cocktail and saw the food menu. She was unsure what the food would be like, but she decided to try it.

"I knew the cocktails were awesome, and now the food is better than the cocktails, and I was like, 'Whoa!'" she said. "That wasn't what I expected it to be."

The bar program is hands-on, Bennett said, and definitely involves more than a little chemistry. He compared it to cooking. By creating their own ingredients, they have more control over the final product.

"Being able to take a little more authority and direction in the flavor you're chasing by making the flavor yourself," Bennett said.

Bennett and Brune craft The Alchemists' Garden's cordials, bitters, infusions, syrups, and whatever else a cocktail could call for. Brune said one of the things that sets them apart from other cocktail-focused operations is botanicals. Take their rose hip cordial or dill-seed infused vodka as an example. Both make for a refreshing cocktail—The Apothecary, which also includes fresh lemon juice and club soda—and made me want some of their turmeric deviled eggs.

That pairing of cocktails and food is challenging, but Bennett said they collaborate with Chef Danelle Jarzynski on using ingredients that might work for both the food and drink menus or come up with combinations that would work well together. For example: On a Green Note—a cachaça margarita with fresh pressed celery juice, lime juice, a house anise infusion, cane sugar, and lava salt rim—and the caramelized anise bulb—which comes with potatoes, lemon honey butter glaze, pepper flakes, and fennel pollen.

Some of the flavors might sound uncommon, but that's on purpose. Bennett said they're trying to be creative with their food and cocktails to expose people to new tastes packaged in a familiar way.

Jarzynski, who went to culinary school in Santa Rosa, said that outside-of-the-box thinking was what drew her to the job. She'd been cooking up rustic Italian for almost eight years from Healdsburg to Paso, her hometown—most recently as head chef at Tin Canteen in Tin City. And when she heard what The Alchemists' Garden was looking for, she was really excited.

She describes the menu as globally inspired cuisine with a vegetable focus. Picking and pulling spices from different continents, she crafts them into something with a Jarzynski twist.

"I don't necessarily think that I'm doing anything that's super traditional to those places, but just kind of putting those flavors together in a different way to get people to try something that they wouldn't normally go for," she said.

And it's a lot easier to try new things when you're sharing plates with four or five people around a table.

"The best experiences you have at a table of people is to taste with each other and share with each other and talk about it, rather than just trying to get through a mountain of food," Jarzynski said. "I try to make it so that people are left with wanting one more bite." Δ