The annual Jubilee by the Sea hot jazz festival takes place Oct. 22 to 25 in Pismo Beach

It’s impossible to overstate the importance of jazz, an art form born and raised right here in the U.S. of A.

It’s truly America’s music, and its evolution has mirrored our own cultural development, from the hot jazz that grew from ragtime as America began to reject Victorianism at the turn of the century, to the ’20s Jazz Age struggle between traditionalists and modernists, through the ’30s and ’40s swing era’s need for optimism in the face of the Great Depression, and onto the late-’50s and ’60s avant-garde and free jazz periods reflecting our social and political turmoil. Jazz may be the most culturally important American export in history. 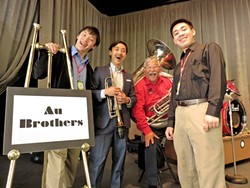 Next Thursday through Sunday, Oct. 22 to 25, you can join fellow jazz enthusiasts as they celebrate early jazz at the annual Jubilee by the Sea hot jazz festival in Pismo Beach. Witness 131 one-hour performances over four days at five venues featuring 13 guest artists and 24 groups. All-event badges ($100), day passes ($40 to $50), and Saturday night swing dance tickets are available. Visit pismojazz.com and click on the “Jubilee by the Sea” link near the top of the page, then click the order “HERE” icon to reach a ticket order form; or call 773-3750 or 481-7840 to order by phone; or head to the Pismo Vets Hall after 3 p.m. on Thursday, Oct. 22, where you can buy your tickets in person.

There truly is too much to list, but the festival kicks off on Thursday, Oct. 22, with an Oktoberfest Celebration with local favorites The Mudskippers at the Addie Street Tent on the beach. The show starts at 6 p.m. and costs  $20. Meanwhile at the Vets’ Hall, Bob Draga leads We 3 plus 1, one of the hottest jazz quartets on the West Coast, starting at 6 p.m. for $25.

After the opening day, music runs from as early as 9 a.m. to as late as 10 p.m. every day. The website contains a detailed schedule of shows at the five venues—the Pismo Vets’ Hall, the SeaCrest Banquet Room, Addie St., and Turk’s Place and Lu’s Landing both at St. Anthony’s—as well as a map and information for parking and shuttle buses.

“Organized and operated solely by volunteers, revenue from the festival helps fund our monthly Sunday Sessions as well as our extensive youth programs,” organizers said in press materials. “Over the last 40 years, we’ve provided scholarships for over 300 students to attend jazz camp. Several of our sponsored youths are featured in the Jubilee including Justin Au, Molly Reeves, and Sam Boorman from Red Skunk.”

Acts include Tom Hook and his Terriers from New Orleans, Cornet Chop Suey from St. Louis, Blue Street Jazz Band from California and New Orleans, The Midiri Brothers from New Jersey, The Barnharts from Connecticut, and The Night Blooming Jazzmen from L.A.

“The Jubilee is a memorable and unique experience because it showcases hot jazz (old-school jazz, so to speak) and emphasizes collective improvisation (a la Dixieland),” organizers explained. “Several of the sets are made up of small groups of musician jammers: Imagine an impromptu jam session, where professional musicians play off each other. You may not see a better version of this type of music, save in New Orleans or Chicago, and we bring it all to you in five convenient locations … including a tent right next to the beach. Collective improvisation is an art form that many kids and young adults have not experienced in their lives.

“We wish everyone could attend this event,” they continued. “It will change the way one thinks about music, with more attention to harmony. The music itself is entirely danceable and features instruments not often seen today, such as the sousaphone and washboard. The combination of instruments is unique, also featuring clarinet, saxophone, trumpet, piano, vocals, trombone, tuba, bass, drums, and guitar. There are also three very friendly jam sets (Friday 3 to 4 p.m. and 5:30 to 6:30 p.m., and Saturday from 2 to 3 p.m.), so bring your instruments! The music you make will be a unique version of fun that you won’t forget.

“One thing’s for sure, jazz will never die in Pismo Beach,” organizers finished. “We have too much love for jazz and [too many] like-minded neighbors that share in our joy. Please visit, say hi, take a listen, and don’t be afraid to hit the dance floor.”

This Saturday, Oct. 17, two of SLO Town’s best original pop acts—Próxima Parada and Fialta (7:30 p.m.; all ages; $10 presale or $12 at the door)—play SLO Brew in a Numbskull and Good Medicine Presents show, and both acts are New Times Music Awards winners.

Blending soul, blues, jazz, folk, and more, Próxima Parada used to boast two lead singers, but with the departure of Bryson Bailey, the group has had to adapt.

“We’ve kept things moving along since Bryson’s departure,” percussionist Andy Olson said. “I made a trip out to Colorado in July and stayed with Bryson for a couple of days. He’s doing great out there! We miss him, but we’re happy to see him settling in so well. It’s definitely been a time of rebuilding and growth. We’ve written a lot of new material, and have rearranged many of the P.P. classics to work well in a trio format. We’ve got several concerts under our belts—the American River Music Festival, Good Medicine’s Sunny Daze concert with Donavan Frankenreiter, and many others. We’re starting to feel a lot more comfortable with our new setup!

“Saturday we’ll be joined by a close friend of ours, Josh Collins, who is an immensely talented guitarist,” Olson added. “Josh is a young gun. He comes from a jazz background, and has a sound far beyond his years. We’ve had Josh join us for several of our bigger gigs over the past few months, and it’s always a blast!”

Fialta (Michael Leibovich, Beth Clements, David Provenzano, and Sarah Shotwell) recently recorded a follow-up to their excellent debut Summer Winter, and while they’ll perform songs from it, you’ll have to wait a while before you can own it.

“In short, we did record an album but it’s being mixed right now—we plan to release it in the new year!” Shotwell explained. “In the meantime, the biggest news we have is that we’re currently partnering with SIP Certified in an awareness campaign about sustainable wine growing. We released a cover of Neil Young’s ‘Harvest Moon’ to iTunes with a music video shot at Claiborne & Churchill Winery, and for October, all proceeds are going to support SIP Certified.” 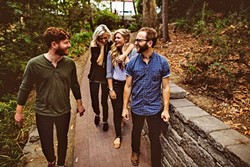 “We’re huge Neil Young fans,” Clements said. “We’ve been playing this cover for a while live. Then, one night this last spring, Neil showed up in SLO for a secret show. We all went together and saw one of our musical heroes in our favorite local venue for a few dollars. It was incredible.”

“We’re looking forward to playing with Próxima Parada this Saturday, but like everyone, sad to say goodbye to SLO Brew,” Shotwell lamented of the club’s planned move from Garden Street “My husband—one of our lead singers—and I met there in 2008 for the first time back when he was playing a show with his old band, Sherwood.”

Come on out and enjoy a night of homegrown music. And speaking of homegrown music and NTMA Award winners, Good Medicine also presents this year’s Rock/Alternative winners, Nothing Ever Stays, at SLO Brew on Thursday, Oct. 15, with The Vacant Shapes and Hightides (8 p.m.; all ages; $10 presale or $12 at the door).

On Friday, Oct. 16, Good Medicine returns to SLO Brew with the roots, reggae, and pop sounds of Hirie (7:30 p.m.; all ages; $11 presale or $13 at the door). Born in the Philippines, raised in Italy, and living in Hawaii, she’s drenched in island sounds.

Aside from a break between 1992 to 1996, U.K. metal icons Judas Priest have been delivering blistering heavy metal music to their legion of fans since 1970. They’ve sold more than 45 million records, and MTV named them the second best metal band of all time after Black Sabbath but ahead of Metallica, Iron Maiden, Pantera, Slayer, AC/DC, Motörhead, Kiss, and Mötley Crüe.

This Friday, Oct. 16, Vina Robles Amphitheatre brings the band to Paso Robles with special guests Mastodon (7:30 p.m.; $65 to $75; visit vinaroblesamphitheatre.com; this show has a General Admission Pit in the front. This area will be sectioned off with no seats and will be standing room only).

Judas Priest’s 17th studio effort overall, Redeemer of Souls (2014), was the highest-charting album of their career, debuting on the Billboard 200 charts at No. 6. As Revolver magazine said, “Thus rejuvenated and recharged, the Metal Gods have delivered their strongest record in over a decade.” 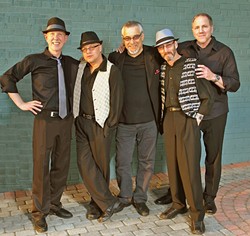 Songs from Frankie Valli & The Four Seasons, Elton John, Sting, Carly Simon, Carole King, Tommy James & The Shondells, Barry Manilow, and other superstars come to life because The Hit Men “are great players, world-class entertainers and, most important, unlike any so-called ‘tribute band,’ they were there when these songs were recorded. Their licks, their solos, their grooves, and their harmonies are embedded into the music and essential to the sound of these records that millions would come to love,” according to press materials.

The Mesa Middle School Band plays a free concert of classical and contemporary music on Saturday, Oct. 17, at noon at the Dana Adobe. Hear classics such as “In the Hall of the Mountain King” and “Greensleeves.”

Back Bay Betty brings their bluesy sounds to the Cambria Rotary’s VIVA Fire And Ice Ball in the Cambria Vets Hall on Saturday, Oct. 17. “Please join us for a fabulous evening of gourmet food, wonderful local wines, dancing, live and silent auctions, raffle prizes, and the ability to contribute to local and international Rotary charities,” organizers said. “Your $75 ticket helps to support scholarships for local graduating high school seniors, sports equipment for all levels of local students, leadership camp for high school students, defibrillators for the community of Cambria, and much more.” Tickets at cambriarotary.org/viva.

Painted Sky Studios hosts a Tribute to Irving Berlin with Charlie & Sandi Shoemake on Sunday, Oct. 18, at 3 and 7 p.m. Charlie’s great on piano and vibes, and his wife, Sandi, knows her way around a jazz standard. Dylan Johnson will join in on upright bass. Tickets are $20, or $10 for students. See both sets for $30. Call 927-8330.