The answer, Mr. Frost, is hugging: An evening at the Winter Solstice Poetry Church 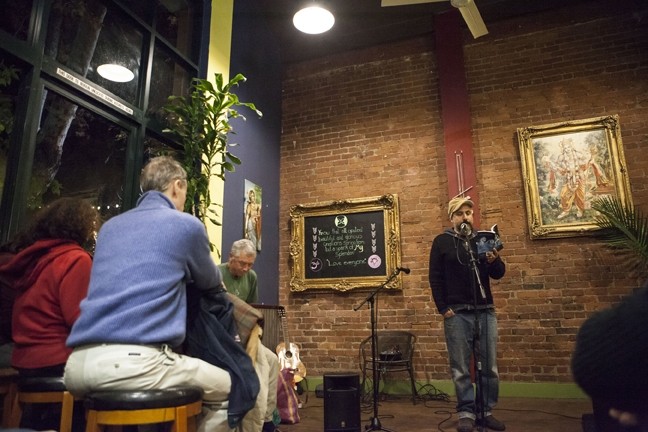 All around me, people are embracing. Eyes closed. Holding each other close for at least 30 seconds. I watch uncomfortably as one woman makes her way around the room, hugging no fewer than a dozen people. I wonder if I’ve gotten lost on my way to the Winter Solstice Poetry Church and instead stumbled across the scene of some great disaster—the kind they show on television, with survivors clinging desperately to one another.

But there’re no Red Cross workers. Just a microphone in one corner and a couple of people carrying guitars. And a lot of people wearing sandals and beanies.

I’ve always regarded poetry as a solitary activity, curled up in some corner resolving the dilemma of whether the world will end in fire or ice, or burning, burning, burning over the world’s turmoil and beauty with Langston Hughes, preferably in close proximity to a fireplace. Reading, and absorbing, at one’s own pace and with no social expectations about clapping or reaction time or appropriate facial expressions. Or, worse still, snapping in lieu of clapping, which has always struck me as contrived.

But I’m also a big proponent of artists engaging the community in new and creative ways. Plus any event that refers to itself as a church but doesn’t require praying to a bearded man with a cross phobia is right up my sacrilegious alley. Colin Rigley, my boyfriend and event photographer, is sulking beside me, mostly on account of the fact that the last poetry event I took him to dragged on for more than three hours. And I have to admit that Dennis Ray Powell Jr. knows how to pack ’em in. It’s hugging room only at Bliss Café, with some 40 people watching the makeshift stage intently. 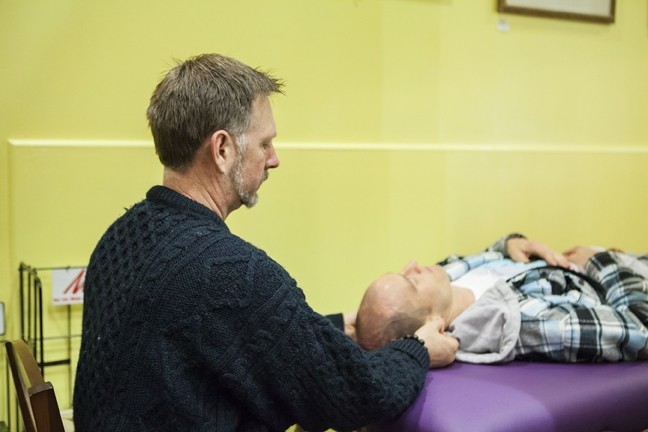 The first musician steps to the front of the room and begins singing “Happy Xmas (War Is Over)” and I instantly relax. I’ve somehow missed out on hearing Christmas music live this holiday season, and the beauty of plenty of people and a crowd like this is that when the musician asks everyone to sing, they oblige him, whether they know the words or not. Outside, in the cold unfeeling world, people are stabbing one another over discount PlayStations, but I’m eating vegan raspberry cheesecake—I’m leery of vegan fare, especially after accidentally eating a piece of vegan cheese that almost made me carve the tastebuds out of my mouth with the nearest knife, but the cheesecake was good—and listening to a happy, disorganized chorus. Not too shabby.

Now, if No Shame has taught us anything, it’s that the tee-ball approach to performance art—all players get equal time and applause—is undeniably an aesthetic minefield. Yes, there were poets like Youssef Alaoui (currently promoting his new book of poetry, Death at Sea, which can be purchased from Youssef for $15) who seem to dedicate themselves heart and soul to their art. If it hasn’t been mentioned before, it’s worth pointing out that Youssef’s voice is eerily akin to Johnny Depp’s, which makes for an enjoyable listening experience when he reads his work. But I’m pretty sure I heard another poet talking about bong water, and there’s something that looks suspiciously like an energy purification or soul extraction going on behind me. And, to be perfectly frank, I’ve always been the sort of person who doesn’t much care to be touched, which makes sitting in a room full of people who hug at the drop of a “hello” almost as emotionally scarring as a three-hour sermon delineating the many reasons I’m going to hell.

So, we bounced. We’d made it nearly an hour, some of which I enjoyed, much of which terrified me, and to make up for my early flight from Poetry Church, I went home and curled up with some Robert Frost.

As Matthew 6 councils, “And when you pray, you must not be like the hypocrites. For they stand and pray in the synagogues and the street corners, that they may be seen by others.” Of course, reading poetry privately at home is also a good way to avoid Bible-mandated stonings for transgressions such as disobeying parents and taking the Lord’s name in vain.