The anxiety of glass and steel

The Oakland artist was 3 when the Great Depression hit, and a preteen at the onset of World War II. “It’s been a tough 20th century,” she continued. “I’m Jewish. My relatives were either incinerated in Poland or barely escaped with their lives, and as a child I was aware of this going on.”

In Feldman’s work, the anxiety of the past seven decades has manifested itself in what art critic Harold Rosenberg would call “anxious objects.” Such an object may be anxious because, as Rosenberg wrote, “it does not know whether it is a masterpiece or junk.” But the anxious object is also described as a “charged” piece, an adjective that better describes Feldman’s “RPM” and “Reach” series, on display at the San Luis Obispo Museum of Art. The innate tension of steel and glass attracts Feldman to these media.

“You are what you eat, and what you make is a reflection of who you are,” Feldman said.

Thus, a lifelong diet of loss, uncertainty, and violence—or at least the acute awareness of it—can make an uneasy person. This is reflected in the “Reach” series in particular, a collection of pieces composed of twin spires stretching just above the viewer’s head.

Many works in the “Reach” series have a curved base, like that of a rocking chair.

“A lot of my work rocks,” Feldman said. She attributes this to living in earthquake country, to “the sense that nothing’s really solid or grounded.”

Her work isn’t rooted to a specific place. It’s never at rest, and neither is she: Feldman moves between media and between continents with seeming ease, spending part of the year in London and dividing her time between sculpture and other disciplines, such as painting, collage, and assemblage. 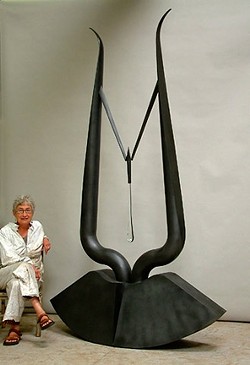 Though her objects are “laced with humor,” Feldman said, “that darkness does come through. Enough people have mentioned it to me that I have to own it.”

A classic example is her “War Toys” and “War Toys Redux” series from 1992 and 2003, respectively. A plethora of hilariously, cartoonishly inadequate renditions of weapons, the beloved collection is virtually harmless. Yet at the Alternative Museum of Art in New York, where they first showed, “the director was so nervous, he thought, ‘People are going to kill themselves!’” Feldman said. “And, you know, it was really a problem for him. To some people, they read so much more threateningly than others.”

At her first War Toys show, a man approached Feldman and said he couldn’t imagine a woman would create such things. The sculptor just laughed: “I said, ‘Really? They’re spoofs of machismo. Who better than a woman?’”

Feldman taught for 35 years at Oakland’s College of the Arts (then called the California College of Arts and Crafts). In 1971, after Feldman returned to work from a two-year sojourn in Africa, a new chair had been hired in her absence. The chair wanted Feldman’s job for a protégé of his, and attempted to fire her, she said.

“There wasn’t another woman teaching sculpture within a 100-, 150-mile radius,” she said. “And I had a husband and two children in Berkeley, and I wasn’t about ready to move to the ends of the Earth. I had to dig my heels in and fight it as a discrimination case. And I won.”

In the ’70s, sculpture was considered a male province, she said—even in the “progressive” Bay Area.

“You laugh, but that’s how it was,” she said. She still recalls the time a psychologist friend of hers, upon hearing of her aspirations as a sculptor, said, “Oh, you have penis envy.”

The “Reach” series, even with its beautiful and slightly ominous spires, seems to chuckle in a corner to itself over such retro Freudian interpretations.

In an already overtly phallic series, a work called “Dentata” stands out as gratuitously symbolic. Several years ago, Feldman explained, a critic referred to some of her fiberglass works as “vagina dentate” (meaning “with teeth”). The artist responded with “Dentata”, a piece in which a thrusting phallic structure, suspended between two prongs, swings ineffectually over a base with a yonic opening at its center. Rows of fiberglass teeth threaten the creakily swinging phallus from both sides.

The striving quality of Feldman’s “Reach” series echoes in the “RPM” series adorning the walls. Here, ladders are a prevalent theme, conveying effort and achievement, automatically drawing the eye upward. Much of the “RPM” series is comprised of photographs in edgy, multidimensional frames. But it’s definitely a sculpture, not photography, series. The glass and metal frames threaten to take over the images they display: detailed shots of the grind marks on her sculptures. Feldman was intrigued by the textures she saw there, and used Photoshop to play with the images and add touches of metallic color. In some cases, the photographs seem a mere backdrop for the fine pieces of sculpture that make up the frames.

Feldman’s “anxious objects” are at once playful and sinister, ironic and dead serious. And in her eighth decade on the planet, the sculptor is still creating, exploring, and asking. The function of art, she believes, is renewal: the equation of Feldman’s rich experience plus your own, combined to make a brand-new experience altogether. ∆