The art of craft: Ralph Bacerra pottery comes to SLOMA

Each day Jo Lauria walked into ceramics class, the giant clay teapot-in-progress was taller than before, but nary a speck showed on professor Ralph Bacerra’s apron as he helped a student craft the 6-foot-tall pottery piece—he was that good.

“That, to me, was pure Ralph,” said Lauria, who studied under Bacerra years ago at the Otis College of Art and Design in Los Angeles. “He always said he took away from the students as much as he gave. He was our sensei. We learned all of our ceramics education from him. He was an inspiration.” 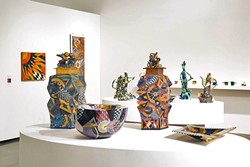 Outside of the classroom, Bacerra (who died shortly after being diagnosed with lung cancer in 2008) was known for elevating pottery from craft to high art with his use of bold colors and complex patterns. After former students who Bacerra thought of as family showed a tribute film at Otis College following Bacerra’s death, Lauria realized that her teacher was underappreciated outside of that community. So the independent curator and author pulled from multiple collections to put 110 pieces of Bacerra’s work on display at Otis College in 2015. A smaller version of that show, Ralph Bacerra: Exquisite Beauty, is now on display at the San Luis Obispo Museum of Art. It features about 70 pieces.

“It [his work] was recognized for its complexity and design,” said Lauria, who likens Bacerra’s work to visual puzzles and optical illusions in the vein of artists like M.C. Escher. “No one else did that kind of work.”

While minimalism and abstraction used to dominate pottery design trends in the art world, decoration and china painting were thought of as “craft,” but not necessarily art. Ignoring that, Bacerra studied Japanese glaze enamel techniques, even bringing colorants back from Japan to use on his art at home. In addition to taking inspiration from the intricate designs of Japanese-style pottery, Bacerra also jived with the Eastern philosophy of art. As an accomplished gardener of every thing from exotic cacti to irises, nature is a recurring theme in Bacerra’s work. Guests who dined at his home could expect to be served on plates handmade by the artist.

“The Japanese don’t consider pottery as a lower art form like in the U.S.,” Lauria said. “Everything is art. He was such a master at what he did, it was elevated in Western eyes to high art.”

While working with clay can still be thought of as a more humble medium, Lauria challenges art aficionados to be visually stimulated and to think outside the vase to see that ceramics and pottery can actually be very refined and sophisticated.

“People have a concept of ceramics being very domestic and utilitarian,” she said. “But there’s a whole other side of ceramics.”

Ryah Cooley is firing up the kiln at rcooley@newtimesslo.com.