The art of democracy

Mark Bryan exhibits: It's badass but not as political as you might imagine

New Times What are you doing today for Halloween? 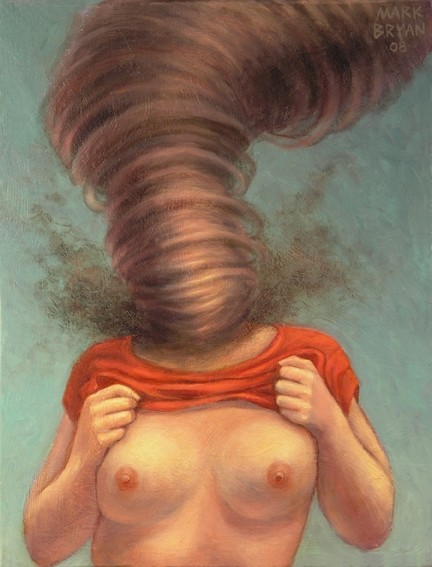 Bryan [Laughs] I am working like crazy. I have two art shows coming up.

New Times What is the second show?

Bryan It’s in San Jose and opens a week after the Steynberg one. It’s the show that is related to the Art of Democracy project.

New Times Tell me a little bit about Art of Democracy

Bryan It’s a collaboration of 50 galleries across the U.S. and the work is about the Bush administration, the war, and torture. They wanted to present what American artists are doing in regards to that. They invited me to be in a show in S.F.[which ended on Nov. 4].

New Times We haven’t talked in at least a year. And things have changed, a lot, politically. You probably have been inspired with what has been going on lately. But I don’t see that in your latest work.

Bryan Actually I have not been doing stuff that is specifically political or about things that are going on right now. Or on specific people. I have been doing more of my symbolic, generalized work that makes comments.

New Times Tell me about that transition.

New Times These newest pieces are all over the place. Tell me more about their themes. I understand your basic themes of religion and sex but why robots, monkeys, and bunnies? And free-flowing modern angst? What the hell is that?

Bryan [Laughs] The monkeys, bunnies, and robots are inherently funny. I’m attracted to them. At least half the pieces are purely for fun—entertaining not a lot of meaning behind them.

New Times Is “Last of the Merlot” a knock at our ubiquitous wine culture?

Bryan The robots blowing up Edna Valley is mostly entertaining but it also has an underlying comment about the winery thing. It’s so over the top around here. And the robots are coming in to correct things.

New Times But still with the bunnies?

Bryan I actually found my old bunny I used to sleep with as a kid. I hadn’t seen it in twenty years. I painted a portrait of it. That piece is in the show.

New Times Will that bunny be making an appearance at the opening reception? Or as a permanent piece perhaps?

Bryan Oh I hadn’t thought of that. That’s not a bad idea. I could hang it on the wall next to the painting.

Bryan I went on the Girls Gone Wild website so it’s kind of like tornado girls gone wild. It’s a cautionary tale. Men really relate to that painting because of the sexual allure of a female.

Bryan At the same time it’s a tornado of emotions. Women are unpredictable. That is the give and take of women.

New Times Did you see Lakeview Terrace? [His painting was in this movie starring Samuel L. Jackson].

Bryan It was part of the set at the young couples’ home. In one scene they smashed it on the coffee table, so that was cool. 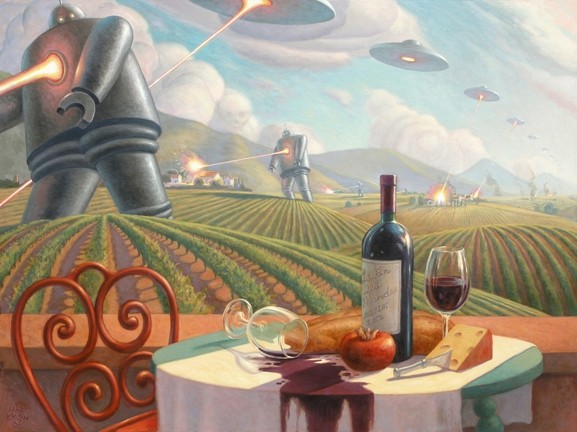 Mark Bryan hangs “Monkeys in My Head” a mix of boobs, bunnies, and other themes close to the pop satirist painter’s heart. November and December with Dennis Larkins prints as well on display and for sale. Reception on Nov. 7 from 6-9 p.m. Through Dec. 28. At the reception, Hearthstone Winery of Paso Robles will be pouring. Steynberg Gallery is located at 1531 Monterey St. in SLO. Info: 547-0278, www.artofdemocracy.org and www.artofmarkbryan.com.