The art of excess

The Tubes--they're one in a million!

I’ll never get to see The Tubes circa 1975 play live. I won’t see lead singer Fee Waybill (born John Waldo Waybill) don his alter-ego Quay Lewd to sing The Tubes’ signature song “White Punks on Dope,” their heavy metal parody and nod to their rich, young, San Francisco fanbase. No, the band’s heyday of rock, satire, theater, and quasi-soft-core-porn shows are behind them now. They peaked long ago, but even so, I’m running, not walking to SLO Brew on Saturday, April 27, when The Tubes play (doors at 7:30 p.m.; 21-and-older; $24 presale or $26 at the door).

Even though they’re not at their peak, they’re still icons, and they still put on a great show that skewers media, consumerism, and stardom. The last time I saw them, maybe a decade ago at Mongo’s Saloon on New Year’s Eve, they were amazing, and they sounded great on tracks such as “Don’t Touch Me There,” a parody of girl groups, “She’s a Beauty,” “Talk to Ya Later,” “Mondo Bondage,” and “Sushi Girl.” They may be older, but The Tubes still have some tricks up their fishnet stockings!

Before The Tubes roll into town on Saturday, SLO Brew has a few other choice shows for your listening pleasure. For instance, Tumbleweed Wanderers kick off the week on Thursday, April 25 (doors at 7:30 p.m.; all ages; $10 presale or $12 at the door), with opening acts Tilted Tides and Próxima Parada. Out of Oakland, Tumbleweed Wanderers mix soul, folk, and rock into something unusual, “bringing the listener from dark chaotic banjo-rock, through intimate acoustic harmonies, to energetic explosions of soul,” according to their bio.

Hip-hop star Andre Nickatina returns to the club on Friday, April 26 (doors at 7 p.m.; all ages; $23 presale or $25 at the door), with Roach Gigz opening. Nickatina, also known as Dre Dog, is a Bay Area rapper with a smooth but aggressive delivery. Here’s a sample from his song “My Name is Money”: What’s crackin everybody you probly know me my name is Money/ And when it comes to me/ Like all y’all want something from me/ I got the pimps, the pushers, players, all the junkies screamin/ Cause if they have no Money baby then they start to feenin’/ I’m at the gamble shack/ Sometimes they put me in the back/ Sometimes the D boys put me where all the guns and all they dope is at/ I’m in your pockets, wallets, purses all your hideaways/ I’m probly the root of everybody’s very violent ways. 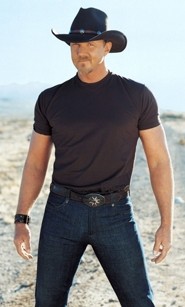 Adkins hit the country scene in 1996 with his debut Dreamin’ Out Loud, with its trio of hits, “Every Light in the House,” “I Left Something Turned On at Home,” and “(This Ain’t) No Thinkin’ Thing.” He’s been a star ever since.

Joe Nichols is best known for his songs “Tequila Makes Her Clothes Fall Off,” “Brokenheartsville,” “The Impossible,” “She Only Smokes When She Drinks,” “Believers,” and “Gimmie That Girl.”

Thompson Square is husband-and-wife duo of Keifer and Shawna Thompson, who sing the mega hit “Are You Gonna Kiss Me Or Not.”

This show ought to be a real barnburner! 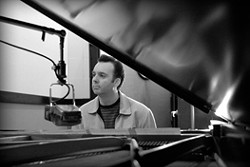 The SLO County Jazz Federation proudly presents its 30th Annual Piano Showcase on Saturday, April 27, at 7:30 p.m. at the Unity Concert Hall. Thirty years? That’s something to celebrate, and the Jazz Fed will with a great line-up of talent, including headliner Carl Sonny Leyland.

Leyland was born in the South Coast of England, but his affinity for American music—especially Dixieland jazz, rock’n’roll of the ’50s, the country music of Jimmie Rodgers and Hank Williams, and later boogie woogie—would lead him on a quest to come to the United States in 1988, where he set up residency in New Orleans for nine years. Later he toured with Dallas band Anson Funderburgh & the Rockets, whose lineup at the time included Sam Myers. In 1997, he came to California and joined Big Sandy & His Flyrite Boys. He’s a helluva player!

The event will also include performances by some of our finest local players, including Charlie Shoemake, Mark Bocchicchio, Steve Carlton, Bob Harway, and David Manion—backed by Darrell Voss on drums and Dylan Johnson on bass. 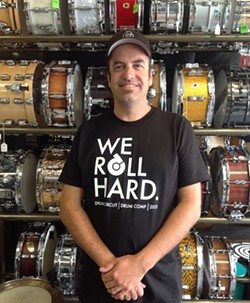 I have a drum kit, but when people ask me if I “play” it, I have to admit I just “hit” it, usually when my wife isn’t around since it really bugs her. If you want to hear some good drumming, however, the place to be is The Graduate on Sunday, April 28, for the 24th annual Drum Circuit Drum Competition (doors at noon; all ages; free).

As usual, you’ll witness some of the finest drummers in the county competing in two age categories for prizes, bragging rights, and, most importantly, to raise money for the Central Coast Autism Spectrum Center.

Usually there are more than 500 attendees, great raffle prizes, and The Grad’s excellent food and grog for your purchasing pleasure. And as usual, there’ll be drum demos by pros like past winner Jennings Jacobsen.

The Paisanos hit one of their favorite clubs, the Frog and Peach, on Thursday, April 25, at 9:30 p.m. “The guys will be ‘Cissy Strutting,’” said Joe DiVincenzo. “No need to bring a jacket; as the weather heats up, so must the Paisanos!”

Ryan Dishen has a couple shows lined up this week: He plays Thursday, April 25, at Frog and Peach (7:30 p.m.; 21-and-older; free) and Friday, April 26, at the Old Creek Ale House in Cayucos (8:30 p.m.; 21-and-older; free). “I’m in the process of booking a lengthy tour through the South, but that’s not until June,” Dishen said. “Other than that, I’m just trying to promote my latest album New Windows for free on my website ryandishen.com.

“Skye Ferguson was running a nightclub in Massachusetts where he met Buddy Guy and Junior Wells who were booked to play at his club,” explained Brent Dannells, keyboardist for the Dr. Danger blues band. “Buddy was so impressed with Skye’s playing when he sat in on some songs and he asked Skye to tour with him in ’83 to ’85. Skye later moved to Santa Barbara, and there he teamed up with future Dr. Danger bassist Jerome White and several others to form the Skye Ferguson Band.” On Friday, April 26, Ferguson will be in town to join Dr. Danger for a night of soul, rock, and blues at 7:30 p.m. in the SLO Down Pub. There’s no cover, but a $5 donation toward the musicians’ gas fund is requested.

SLOfolks has Claude Bourbon and David Jacobs-Strain with Bob Beach playing two shows for the week: Friday, April 26, at Coalesce Bookstore (7 p.m.; $20; 772-2880); and Saturday, April 27, at Castoro Cellars (7:30 p.m.; $20; 238-0725). Bourbon’s a stellar guitarist performing a fusion of blues, jazz, folk, classical, and Spanish guitar. Jacobs-Strain mixes blues with other genres. Beach adds flute and vocals to the mix. Sonnie Brown will interview the artists on her radio show SongTown on Saturday, after 2:30 p.m., on KCBX 90.1FM.

It’s time for the second annual Rockn’Flow Music Festival on Saturday, April 27, at Santa Rosa Park, from 1 to 7 p.m. See live music on two stages, a skate demo, live art, local food and merch vendors, and a beer garden for those of age. “We are basically throwing a big party to celebrate spring and music, and the city council’s decision to build the new skate park,” said organizer James Kaye Miller. “We’re an up and coming local network here looking to bring something new to the music and entertainment scene, and this will be a great look into our progression since last year’s first annual festival.”

Check out Jazz on the Vine on Saturday, April 27, from 2 to 4:30 p.m. in D’Anbino Tasting Room. “Nine of the finest musicians along the Central Coast bring trumpet, sax, trombone, guitar, bass, and percussion together to perform as Jazz on the Vine. Vocalist Steve McCann’s smooth sentimental style matches the arrangements of contemporary jazz and big band standards. Selections include ‘New York New York,’ ‘Luck Be a Lady Tonight,’ ‘Beyond the Sea’ and other favorites,” said promoter Carmine Rubino. The show is free and you can taste wine for $5. Later that night, Barflyz will play an 8 p.m. show. “Barflyz has become one of the most in-demand musical entertainment forces here on the Central Coast,” Rubino continued. “Combining the talents of seasoned celebrities who have performed with The Steve Miller Band, Tower of Power, Carol King, Dianne Shurr, and the late Marvin Hamlish, Barflyz has set a new standard in cabaret-style showmanship. With rearrangements of pop hits, jazz, blues, R&B, Latin, bebop, and originals, Barflyz covers all musical genres with style and class. Excellent lead vocals and harmonies are featured throughout the show while featured special guests augment every performance.” This one will cost you $10. Reservations are recommended: 227-6800.

Ready for a “physically and musically explosive show?” Because that’s what Pointdexter promises to deliver when they return on Monday, April 28, to Frog and Peach. They’ve been together and released two studio albums, NeoAnomaly and On the Surface, and you can hear their music on Pandora, Spotify, and 98.5 Rock. Influences include Foo Fighters, Led Zeppelin, Muse, Incubus, Queen, Red Hot Chili Peppers, and The Rolling Stones.

The Barrel Fever Trio brings its high-energy, nontraditional bluegrass to Frog and Peach on Sunday, April 28. Hailing from Orange, Calif., the group will play a variety of styles, and the trio says they’ve “developed their own collective sound and personality. They’re sort of like a box of chocolates; you never know what you’re going to get!” The group is Alex Vo on lead guitar, Scotty Brown on bass, and Katie Jo Watson on mandolin, guitar, and vocals.

On Monday, April 29, the Frog and Peach will be host to “Mondays at the Peach Redux,” a revisioning of the popular Monday series of yore. “It’s been several years since MATP existed, and I get asked about it quite regularly,” said organizer Patrick Hayes of the band the Dead Volts. “So we are going to do a one-off show just to see how people feel about it now. If it goes well, we might do some more. The ‘headliner’ for the evening will be John Moreland out of Oklahoma. John is a songwriter’s songwriter. His albums range from straight up rock’n’roll to meditative acoustic musings. He had a song featured on Sons of Anarchy last season and has a new album due out from Last Chance Records this year. As I listened to his catalog of songs, the only thing I could think of that accurately describes him is ‘craftsman.’ Other performers include Split-Rail, David Wilson (of American Dirt), and a load of other fantastic folks. True story, swear to god.”