The artists behind the labels

During a dinner date with Dan Hardesty at the Park in SLO, we found it difficult to decide on one wine from the long list of excellent Central Coast and international wines. So when owner/chef Maegen Loring, whose taste in food and wine is extraordinary, recommended the McPrice Myers 2005 Grenache we didn’t hesitate to order it. Still, I never expected that it would be a revelation, and we drink great Central Coast wines regularly. 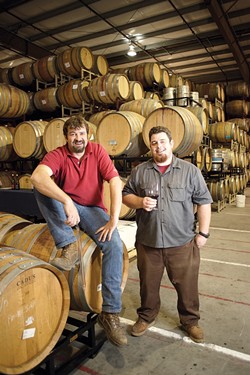 That Grenache was a blockbuster in a bottle with its perfectly ripe fruit, bursting with fresh wild blackberries, blueberries, and spice flavors woven with a thread of bright raspberry and highlights of smoke and black pepper notes. It made me reflect on the rise of Central Coast wines, which I’ve watched skyrocket in quality since I relocated here in 1996. Until then I was among the editorial team at Wine Spectator magazine (hired in 1989), in which my mentor, critic James Laube (pronounced Lob-be), often wrote disparagingly of Central Coast wines. I remember those days vividly: Whenever we opened a bottle of Central Coast Pinot Noir, it filled our tasting room with the potent green fumes of bell peppers. Adding salt to the welt from his harsh appraisals, Laube usually wrote, “… just what I expected from this region.”

No more. These days, instead of heartless barbs he’s busy extolling the qualities of Central Coast artisans. In fact Laube, too, raved about the McPrice Myers 2005 Grenache, giving the $32 value-priced wine an awesome score of 93-points. The delightful wine is the namesake of owner/vintner McPrice “Mac” Myers, of whom I knew little, though I had highly recommended another of his wines: Barrel 27 Syrah 2005 Central Coast (Dec. 27, 2007). I picked up that impressive red for only $15 but it had the depth of other brands priced twice as much. This brand however, is owned by Myers and his partner, winemaker Russell From, whom I had met at Hospice du Rhone but had never interviewed.

The morning after tasting Myers’ Grenache I called to ask for an interview with him and From at Central Coast Wine Services (CCWS), where they’ve been making Barrel 27 since 2002. The dynamic duo actually produces several brands: Myers makes his eponymous label; From makes Herman Story Wines; both brands are devoted to Rhone varieties. Together the partners make Barrel 27, the bargain-priced label they own with a third partner, Jason Carter, who’s their national sales representative. They also consult for four private labels, owned by people who aren’t winemakers. From explained: “They’re clients who want their wine made properly without buggin’ us.”

That telling note spoke to me of the passion in From and Myers. While many big wineries (corporate types that can buy the big ads) tell wine lovers how passionate they are about wine, these two guys exude ardor. As we tasted through their long lineup of impressive wines from all three labels, they would occasionally speak to each other as I imagined they do while tending to their wines still sleeping in barrels—I felt privileged to a private conversation I wouldn’t normally hear. And witnessing their fire for their craft impressed me as much as the quality of their wines.

“We always say the other [partner] is more competitive, but if we were this wouldn’t work. It’s the wine that matters, it’s not about us,” Myers pointed out. He explained that Barrel 27 came about when both winemakers had wine that didn’t make the cut for their premier brands. So they created what winemakers usually call a second label. Both men were 27 at the time, hence the label. Although it was a value-priced line-up they still wanted it to be of good quality. “We have to make decisions fast but you do whatever you have to do to make the wines better,” Myers explained. “We want people to taste it and say that’s the best $15 wine I’ve ever had.” On the back label of each Barrel 27 wine, you’ll read: “Each bottle of this wine represents a dream realized by two friends.”

In the early 1980s, such passionate young winemakers as Jim Clendenen of Au Bon Climat and Bob Lindquist of Qup» in Santa Maria Valley could start up a brand on an apprentice’s budget and become the winemaker superstars they are today.

That’s not true now; at least, that’s what I thought until I heard From and Myers’s story. Myers explained: “We came into the business with practically nothing; I only had $10,000 saved up. If you had told me that I’d be staring at 1,000 barrels of my wine in ’08 I’d have told you—you’re crazy.” The partners admitted they began doing business by borrowing money from their parents. “We started the business with $10,500,” From remembered: “I even downsized my car to add another $2,000.”

From, a 2000 Cal Poly graduate in agriculture business, began working at CCWS as night-shift cellar master. He began making Herman Story wines, named for his deceased grandfather, in 2001. Myers was working for Trader Joe’s (since he was 18) where he developed a passion for wine and food. As he began exploring wine regions he discovered Paso Robles, he recalled: “I fell in love with the area as much as I did the wines.” He began working with area winemakers for the experience and, when he was ready to break out on his own, his peers suggested leasing space at CCWS, a haven for small producers.

When Myers began moving his barrels in, he met From. “I invited Mac to check out my wine’s coming from different regions, but at different stages,” said From. After sharing some wines, vineyard discussions, and punching down fermenting grapes together, they had established the beginning of a beautiful friendship.

The quality of their wines shows across the board, from the Barrel 27 2006 High on the Hog and Herman Story 2007 Tomboy, which From described as “elegant and brutish” (both white Rhone blends), to their Syrahs and Grenaches. I tasted the unforgettable Herman Story 2006 Syrah Nuts & Bolts, and loved it. From explained: “I want to make wine that’s like butter in your mouth, fabulous and voluptuous.”

Their 2006 vintages are already in local markets, and they’re even more enthused about the 2007 vintage. We tasted through a number of wines from barrels, after which Myers said: “These wines are the best I’ve ever tasted in barrel,” adding with a smile, “They’re so big I don’t know if we can put the reins on them.”