The (bad) luck of the draw: Getting tied up in the World Cup 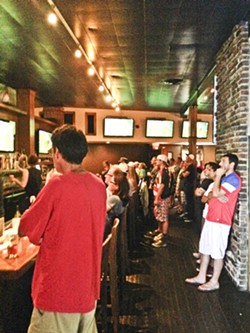 I may as well be honest about it—I’m a fair-weather soccer fan. No, I won’t call it football and, no, I won’t watch the sport unless there’s nothing else on.

That said, I make an emphatic exception for the World Cup. There’s something about the mixture of nationalism, drama, and gooooooooooals that’s extremely compelling to me.

Though I have dalliances with rooting for other nations, I am—first and foremost—a fan of the U.S. squad (or USMNT, as they’re confusingly acronymized). The reasons for this allegiance are as follows: a. ’Merica!! b. ’MERICA, GODDAMNIT, and c. the USMNT is fairly mediocre, making them consistently intriguing underdogs on the world stage.

On June 22, the USMNT was set to play an important match against Portugal in the middle of the Amazon rainforest in Brazil. A win would guarantee advancing to the next round of the tournament, and anything less than a victory would mean more stress and an uncertain future.

Normally, I prefer to watch sporting events in the comfort of my own home. During this particular event, however, I was blessed with the presence of my girlfriend, Emma, who lives in Seattle.

Since we both wanted to watch and Emma’s plane back home was set to depart from LAX shortly after the end of the match, we decided to catch the showdown at a sports bar that was as close as possible to the airport.

Even though “close to the airport” is a pretty terrible criterion for selecting a sports bar, we were happy to find the promising-looking Tompkins Square Bar & Grill in L.A.’s Westchester neighborhood, a mere three miles from LAX.

The 200-mile drive from San Luis Obispo to L.A. gave us ample time to analyze the upcoming match. In my head, I tried to brainstorm everything I knew about Portugal, but was only able to come up with Emeril, Cristiano Ronaldo, surfing, and delicious sausages—hardly the stuff that choice insults are made of.

After enduring some typical Los Angeles traffic, we arrived at the bar during the match's 9th minute. The place was absolutely heaving with loud, drunk, and belligerent patrons decked out in garish American-flag apparel. In other words, it was perfect.

Perhaps as cosmic punishment for our tardiness, the USMNT was already trailing 0-1 when we arrived, having conceded a Portuguese goal in the 5th minute. Since securing a seat, a drink, or food was entirely out of the question, we propped ourselves up against the wall and glued our eyes to one of the eight blaring big-screen TVs. 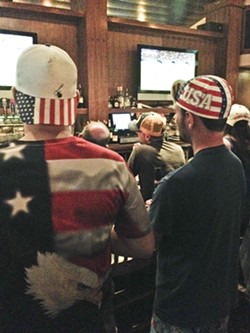 After briefly cutting in front of us, an older gentleman in an American flag polo turned around sheepishly.

“I don’t want to block you, but I do need a drink,” he explained.

The score remained stuck at 0-1 as halftime approached, and the pro-American crowd was not pleased.

Any close-up on Cristiano Ronaldo—Portugal’s star player and a prima donna of the highest order—was invariably followed by a lusty chorus of boos from the audience.

“Get off the ground, Ronaldo!” yelled one drunk bro from the back of the bar. It should be noted that the DBIBOB (drunk bro in back of bar) quotient was alarmingly high at this particular venue.

After a few more minutes, it was halftime, and the score was still 0-1 in favor of Portugal. Seeking some fresh air and food, Emma and I walked out of the dark bar into the blinding afternoon L.A. sunshine.

Lo and behold, right across the street was Beach Pizza—a clean, inoffensive restaurant that was 100 percent less crowded and also playing the World Cup.

After ordering a buffalo chicken pizza, we decided to stay at the restaurant for the second half. There were about 20 soccer fans at Beach Pizza, which made for a more subdued (but still invested) audience.

Right after the second half started, an authentic British family settled in behind us and ordered some garlic bread.

Some combination of the British invasion mojo and our voracious pizza-eating must have inspired the USMNT, because Jermaine Jones (64th minute) and Clint Dempsey (81st) both hammered in dramatic goals for the Yanks to give us a 2-1 lead.

For each goal, the restaurant erupted in loud cheers, and Emma and I high-fived enthusiastically, because we are dorks.

After each sonic explosion, the 5-year-old British boy sitting behind me tapped me on the shoulder and worriedly informed me that, “You scared me, all of you!”

I pseudo-apologized to his mother by mouthing “sorry,” but, truth be told, I wasn’t really sorry. Americans never apologize, dammit. I must have also been jittery with excitement, because there is a large buffalo chicken stain in my notebook at this point.

We were surely headed toward an exciting American victory—we just had to hold on for a few more minutes.

That’s when it happened.

We lost possession of the ball in the midfield, a few Portuguese players streaked downfield, Ronaldo curled a beautiful cross in front of the goal, and some jerk named Varela headed the ball into the goal in the match's final minute. 2-2. The Beach Pizza crowd was thoroughly deflated.

The match ended 30 seconds later. Emma and I (and America, for that matter) were left to deal with the rather unfamiliar feeling of a tie, a draw. It was definitely disappointing, but at least it wasn’t a loss.

If you’re reading this issue of New Times on the morning of June 26, then the USMNT is likely squaring off against Germany in a vital match.

UPDATE: The USMNT was unable to beat Germany (suffering a 0-1 defeat) but advanced to the next round anyway. Our next match (in which the winner advances and the loser goes home) will be against Belgium at 1 p.m. on July 1.

I wouldn’t recommend driving down to L.A., but you should definitely do your patriotic duty and cheer the Stars and Stripes on.