The best of the fest

The San Luis Obispo International Film Festival comes at you with 50ish films. Here are some staff favorites to help narrow it down

In my first year as a Film Festival juror, I was charged with evaluating around 40 short films. Most of them were pretty good. A few—Kavi, The Line, The Response, The Interview—absolutely blew me away, redefining my concept of what can be communicated in just a few minutes. I abused the optional comments section to lavish them with praise, adoration, and an abundance of hyperbolic adjectives. Then there were a couple that left me so underwhelmed that I felt leaving the comment “pure shit” was generous, seeing as it didn’t expose every single plot hole in malicious detail.

The point being, there are some real gems out there this year, winking at you from the mire of mediocrity, and we want to help you find them. Calendar Editor Christy Heron and I both judged the shorts category, and Managing Editor Ashley Schwellenbach picked up the slack, taking on both narrative and documentary features. And while there were several great flicks in every bunch, the following are our favorites.

While I confess that my interest in competitive bicycle racing could best be described as minimal—possibly even non-existent—this documentary captured and maintained my interest from the very start. It follows the 2009 Tour de France and particularly focuses on the highly successful Team Columbia. It simultaneously manages to capture the breath-taking beauty of the route the bicyclists follow while conveying the incredible pain the competitors must overcome in order to participate. And in those final minutes depicting the mad dash through the Champs-Elysees, and the crowning of the victor, I’m willing to bet you’ll be holding your breath. 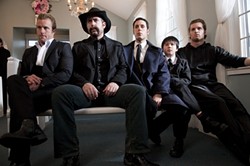 The Beginner’s
Guide to Endings

Five brothers from three mothers and one low-life gambling father. One penis pancake (it was supposed to look like a racecar). An Elvis jacket. And a stick-and-nails-fight. That’s my summation of the film’s plot, which rivals a Wes Anderson movie for fucked-up-but-funny families. The film’s core question could be phrased as: What do you do when you learn, at a young age, that you’ve got another year or so left to live? The answer is neither cliché nor predictable, and it’s even better when it’s being asked by multiple people whose life choices up to that point have been less than exemplary.

The Man Who
Knew How to Fly

Mr. Tomašek is a mild-mannered bachelor with a job at a patent office. One evening, he recalls a dream in which he knew how to fly, and he gives his dream-flying techniques a try. Soon, he is soaring blissfully above the city with ease. But once he shares his ability with his boss, he gets talked into demonstrating it in front of a panel of experts, who systematically criticize his natural gift into nonexistence.

In the spellbinding setting of Ireland, “phone boxes,” or telephone booths to you and me, are being razed.

Bye Bye Now features locals who reminisce about finding love, taking shelter, and learning of their first-born child in those boxes. This beautifully filmed battle between progress and nostalgia evokes all of the emotions. As one old-timer puts it, “They might as well leave it there, ’twill rot eventually like we all rot away eventually.”

But don’t let us make up your mind for you! Get out there and see some movie magic for yourself.