The best show you didn't see 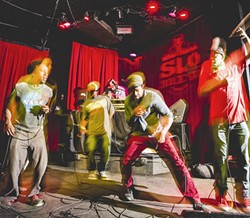 If you like having fun, you missed out. Hip-hop legends Slum Village and Bizarre Ride II The Pharcyde performed last Sunday, May 12, and you missed it. You missed the opener, JP the Diesel, who killed it with his new group Afraid of Heights. Had people been there to hear it, they would have danced … but there weren’t people, so no one danced

This is not to say that there weren’t a dedicated few who stood by the stage, arms raised all night, but they had no competition and plenty of elbow room.

The alcohol barrier at SLO Brew is devastating to the liveliness of the crowd. No one wants to stand by the stage if they can’t have a drink in their hand.

Slum Village comes out and works hard to get the crowd moving. More people have come out at this point, but it’s embarrassing to have so few people willing to enjoy the presence of such important musicians. Slum’s beats slap, they’re fun to watch, and their show is practiced but not tired. It's like they’re performing a private show for 30 people, half of whom are sitting down. I’m frustrated. Not with the music, but the crowd.

When Bizarre Ride takes the stage, the concert finally jumps into full throttle, putting a big smile on everyone’s face.

The downtown drinkers have started to wander in, and people have begun to jump the barrier from bar to stage. Cheers of joy cry out when each song starts, unleashing nostalgia by the second. They performed flawlessly, slaying beats and hyping the crowd with participation.

When the set was over, Fat Lip took over the decks and started spinning beats. SlimKid3 got on the mic and asked, “Are there any local MCs out there?!” Ten people jumped on stage and the local cipher began. Trading off the mic, the crowd got to see an excellent sampling of the local talent. Standing out were: JP the Diesel, showcasing his freestyle skills and sandpaper voice; Cheifer ES, visiting home from school in LA;  and two female MCs who appeared to be traveling with the tour. It was fun as hell. To think that you missed it … what a shame. Don’t be a dingus—go to concerts. See the local opener. Have fun. I did.