John Chester (Lost in Woonsocket, Rock Prophecies) directs this documentary about his and his wife's developing a sustainable farm on a 200-acre patch of depleted ground in Ventura County. They work to rehabilitate the soil, plant orchards and row crops, and raise a variety of animals. Hoping to live in harmony with nature, they discover that nature isn't always interested in living in harmony with them. (91 min.) 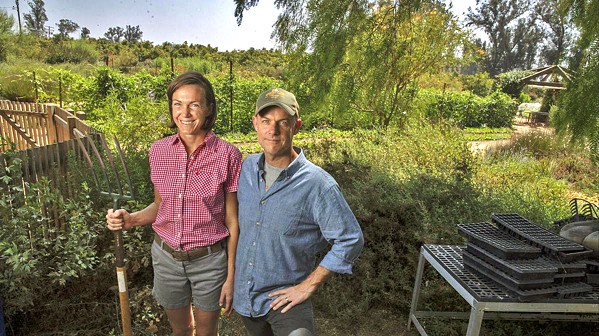 Glen John and Molly Chester are idealists through and through. They want to live a life of purpose, and Molly—a personal chef who records online cooking tutorials—dreams of living on a farm and raising all their food. When their rescue dog, Todd, gets them evicted from their apartment for excessive barking, they see it as an opportunity to make Molly's dream come true. Through investors who share their vision of a sustainable agriculture model, they raise enough money to buy Apricot Lane Farms, a dusty patch of earth that had been foreclosed on twice. They had no experience. What made them think they'd be able to make this farm work in the midst of California's brutal drought? Alan York—a soil, plant, and biodynamic consultant—told them it was possible to rejuvenate the land, and a lot of the film has to do with their ongoing struggle through diversification to create the fertile ground that York envisions. It's an inspiring dream, and York promises them that when balance is restored to the land, profitability will come. The Chesters can't seem to explain that to the flocks of birds that feast on their stone fruit trees; the gophers that eat the roots out from under the trees, killing them; and the coyotes that slaughter their chickens—initially the only profitable part of the farm—en masse. You'll laugh, you'll cry, and you'll watch in wonder through the magic of birth, death, and everything in between. Mostly, I was reminded of how unbelievably difficult farming can be and the deep work ethic and perseverance it takes to continue in the face of adversity. For anyone with a passing interest in food or farming, this is a must-see.

Anna As a former chef and farm-to-table enthusiast, Molly's ideals and mine run parallel. I spent the early 2000s reading up on permaculture, attending Food Not Bombs meetings, exploring communal living, and dreaming of a span of land that had everything needed to feed as many as possible. Joel Salatin, owner of Polyface farms and featured expert in Michael Pollan's An Omnivore's Dilemma, was my first intro into the concept of old-school farming, ruling out monocultures and letting nature bring balance—sometimes in very dramatic ways. One thing all of that research taught me is that it's hard, thankless work a lot of the time, heartbreaking and exhausting, often unprofitable and downright frustrating. One thing the Chesters don't lack is perseverance. Watching them make their seemingly impossible dream a reality and slowly build on itself as they make the soil fertile and profitable is beautiful. Sometimes that means building a house for worms; sometimes it means birthing piglets or shooting coyotes. When the farm and wildlife are in balance, there are solutions to any problem: You just have to be clever enough to realize the assets you have on hand. Snails ruining your crops? Release the ducks! Too many flies from cow manure? Get those chickens in there! John and Molly are beacons of hope in an ever increasing factory-farmed world. It isn't an easy life, but it's a glorious one.

Glen The story's constant underlying theme is finding balance, and its overarching message is that we can, through hard work and ingenuity, return our entire world to harmonious balance. What the Chesters did to these 200 acres is nothing short of amazing and exactly what humanity needs to do to the entire planet, but current corporate agriculture puts profitability before sustainability. As inspiring as the film is, it's hard to imagine manifesting this form of agriculture worldwide. We have too many mouths to feed and an economic system—capitalism—that demands constant expansion to function. Hence, our very way of life is unsustainable, and to meet demand, our Big Ag food system generates inexpensive food that sustainable farming can't compete with. I guess what it comes down to are small choices—choices to pay more for produce from local growers, choices to source meat locally from humane farmers, and choices to reject Tyson, Foster Farms, Monsanto, and other corporate ag entities that are part of the problem. Anything's better than nothing. Obviously, we can't all be like the Chesters, but we can strive to be part of the solution, however small that part might be. Billions of people making small choices can have a big impact, and watching this documentary might be just the inspiration you need to start making those small but essential choices.

Anna The Chesters are not alone—there are people and farms doing this hard work all over the place. You're 100 percent right: Putting your money where your mouth is keeps them in business and able to continue the cause. PSA—Get to farmers' market and support local farmers and ranchers! York is certainly a force behind their drive and dedication, but John and Molly are left feeling abandoned when health issues no longer allow their mentor to consult. They must forge on, hoping the skill set and mindset he has instilled in them leads them to profitability. Along the way they collect a family of like-minded folks looking to learn and make their way along the same path. John is a filmmaker with a knack for capturing the small moments—whether it be time-lapse video of coyotes or snails, or slow-mo of ladybugs feasting or aphids laying eggs, it's a visually stunning piece of work. While the hope and idealism is saturated, the film doesn't gloss over the rough parts. I'm not going to lie—I cried a whole bunch, mostly over animal stuff. Whether it was with worry over Emma, their pig, not wanting to eat after birthing 17 piglets or the countless chicken carcasses after a coyote raid, the farm life isn't easy. The Biggest Little Farm is triumphant, hopeful, and tender. The Chesters may have you thinking about carving out a little piece of paradise for yourself one day. I know they certainly reminded me of the reasons I've longed for farm life since I was a kid feeding goats, rabbits, and chickens in my parents' yard. See this one in theaters. It's a joy. Δ