The breast is yet to come

Glen I think what I appreciate most about this annual fundraiser is its sense of inclusiveness. Unlike a lot of dance shows, this one doesn't discriminate by age or body type. Some of the performers are senior citizens, others still in their teens. Some are thin, others thick. Tall, short doesn't matter. They're all comrades joined by their love of dance, and it's a love made clearly apparent by their exuberance. I mean, heck, we just went to a rehearsal that was a week away from the first performance and the dancers were giving it all they had. After they ran through choreographer Jason Sumabat's number a Dutch tulip festival meets hip-hop vibe the performers went around and introduced themselves and explained why they chose to volunteer to do all these rehearsals and perform over two weekends. Many came from families of women who had survived or succumbed to breast cancer. Some were survivors themselves. Universally, though, they voiced their love of dance, which to me proves that you don't have to look like a prima ballerina to be a dancer. It's desire, and these performers certainly have that. 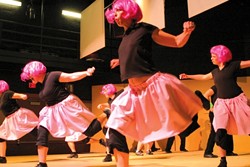 # Ashley However much I enjoy local dance shows, they do often tend to have a snobbish air about them. I don't think this a reflection of the attitude of the dancers as much as it is a reflection of a classical art form. And Sapphire Moon never strikes me as pretentious. If anything, watching the dancers is downright joyous. The music is humorous and upbeat, the costumes are hilarious bouncing pink wigs and pimp hats in all colors. It's definitely the type of show you're not going to see anywhere else. I'm always curious about how choreographers manage to host annual dance shows that keep audiences returning, so I was excited to hear about several things that Sumabat and the other choreographers are doing to keep it fresh. This year's show will include all-new choreography, though it will incorporate some of last year's more popular music. Also, "Sapphire Moon Ascending" will be the first multimedia Sapphire Moon production, and it will include several aerial numbers including a pas de deux on a trapeze. And the show takes place in the Clark Center's Studio Theater, which is a very intimate environment, giving each dance number a vivacious, in-your-face sort of feel.

Glen It is a small theater, so it's going to feel like you're almost on stage, and if it's anything like past shows, the dancers may come streaming in from the wings or the back of the house and 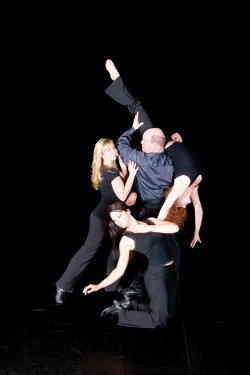 # onto the stage. If you're in the front row, you'll probably get some dancer sweat on you. It's hard to believe this is their seventh year. I remember the first show I think it was in the wine basement at Madonna Inn, and it was such a breath of fresh air sexy and steamy and a ton of fun to watch. We only got a taste of the show at last week's rehearsal, but I can't imagine that this year isn't going to be just as hot as years past. And, as always, the cost of your ticket is going to a good cause.

Ashley Sapphire Moon is also fun because, like any other community show, you see a lot of local performers from other shows. Some of the participants include dancers from the Central Coast Follies (which also hosts an annual benefit dance show) and Cal Poly's Eight2Eleven Swing Group. One of the performers frequently treads the boards at the SLO Little Theatre and participated in last year's Shakespeare Festival. And Sumabat himself participates in several other shows locally despite the fact that he lives in San Diego including the Shakespeare Festival. It's a who's who of enthusiastic performers volunteering their time because they love to shake their booties and, as one participant eloquently stated, "it's for the boobies."

INFOBOX: - Dancing for a cause

Blue Dove Productions' seventh annual dance show, "Sapphire Moon Ascending A Celebration of Women," runs April 19 through 21 and 26 through 28 at 7 p.m., and April 29 at 2 p.m. at the Studio Theater of the Clark Center. The two-hour show features more than 50 dancers and multiple choreographers all volunteers. Proceeds generated by the show specifically designated for breast cancer research and support benefit the American Cancer Society. Tickets cost $21 in advance and $26 at the door. To purchase advance tickets, call the Clark Center at 489-9444.