The business of the beyond

For many local business owners, death isn't something to shy away from

Death isn't the type of subject material we bring to the dinner table. In the secular West, it's rarely something to bring up at all. But for families who see death every day, it's not something that can easily be avoided with a clever change of topic. It's their livelihood, but, more importantly, it's part of their life.

# Humans deal with death in a variety of ways, and while most people handle it solely on an emotional or spiritual level, some also deal with it professionally. Though friends and family members who encounter death may grieve and move on in their own ways, people who work with death in various industries have to prepare themselves for the next client. It's a business, after all, one that presents its own challenges to the people who work around it. They must balance compassion and craft, emotional stability and skill.

Kirk Reis fell into his role of funeral director. His parents started San Luis Obispo's Reis Family Mortuary, where he still works with his 87-year-old father, the embalmer. 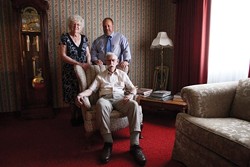 # Reis refers to his work objectively, dispassionately, with a tired voice. Most likely he's fielded these questions before: Do you bring your work home? What do you talk about at the dinner table?

The notion that his life might be any different from others' because he deals with grieving every day may be overly simplistic, but clearly he's affected.

"It's a way of life," Reis said. "It wasn't a chosen profession, it was something I was born into. But we're just like a regular family, we don't talk about those things at the dinner table."

Reis exudes a sense of dignity when he does talk about his work. The words role crisply off his tongue with the same stateliness as if he were a major general: funeral director.

"It takes the right kind of person to do this," Reis said. "You have to put yourself into their shoes without falling apart."

His role is more than his title suggests. He doesn't merely put on a somber production, he directs families to what they need to know. The job requires sensitivity and compassion, Reiss said. Ten extra minutes to get to know a family makes all the difference. It requires him to be part psychiatrist, part art director, and part theologian.

"Sometimes it's really graphic," Reis said, referring to the cases he sees. "And sometimes it's hard to look at, but you have to not think about that, and focus on what the family needs."

That being said, it's sometimes impossible to leave the work behind--or maintain composure.

"Every death is tragic," Reis acknowledged. "But sometimes you see children who get run over by a car, and you can't think about your own kid. You have to think about the parents, and what they need. Sometimes I go home, and my daughter knows that I dealt with parents who have lost a child, because I won't let her out of my sight for a day or two."

That's the part of the job that's not for everyone. Over the years, Reis has had to bury his own friends and his own family. In those cases, Reis said the only way to deal with the situation is to stay busy. For the most part, the occupational hazards are hidden, but still very real.

"There are a lot of people in this business who have crutches," he explained. "There is a high rate of emotional distress, and abuses that happen as a result--just like there's a lot of nurses who can't handle what they see every day. But if you're numb, you have no business in this business, because you need to know what this family is feeling."

"I did do hair dressing on live people to begin with," Melissa Tomlinson said, recalling her start in cosmetology.

After that beginning, however, she transferred her skills to a different demographic: people who've passed on. She's been on the other side now for about 12 years. Like most people in the business, she had a family connection. Her husband is a funeral director and embalmer at Grover Beach's Marshall-Spoo funeral chapel, where she works. Tomlinson said that even though she was familiar with bodies through her husband's profession, working with them herself came less than naturally.

"I was really nervous the very first few times I had to be with the bodies," she said. "I made my husband stay with me because I didn't like to be alone with them. I don't feel that way anymore. I think it's an honor."

Most of Tomlinson's clients are elderly women who haven't seen a hairdresser or a cosmetologist for years. Often, the families will want to see their loved ones as they remember them from a dated photo. Tomlinson is sensitive to the truth that the view in the open casket is a lasting one. When the deceased appears peaceful and healthy, the family receives some closure, she said. Still, when Tomlinson talks about her clients--the deceased--one gets the impression that she works for their interests as much as the family's.

Often, Tomlinson works from family photos of varying quality and vintage, which represent what the family wants, but the task of making someone she's never met look the way the family recalls them at their best requires as much creativity as skill.

"Sometimes they bring us in a picture that's very recent, and sometimes it's a wedding picture from 40 years ago," Tomlinson explained. "Other times I just kind of look at their little face, and I just think, what could make her look as pretty as she can be?"

Tomlinson seems more upbeat than some of her mortuary counterparts who deal with the living. For her, it's not a job about sadness or grieving, but rather about celebrating and honoring the dead. It's like dressing people for their last party--albeit a somber one. In Tomlinson's world, the best way to honor the family is to give the dead their dignity. Then it's not creepy anymore it's a service to people that she takes very seriously.

"The way I perceive death has changed since I've been on the industry side," Tomlinson said. "When I was younger, I thought of it as sort of morbid or scary. Now I look at it with a lot more compassion. I see the families, and I just try to give them a little closure."

Joyce Devantzis deals with the other, other side of death. She's a psychic medium between the living and the dead. Though she's not someone who works with death in the traditional sense of funerals and preparation, she does regularly encounter locals searching for meaning or closure or something more.

"People always ask me, 'Do you talk to dead people?'" Joyce Devantzis said. "And I tell them, 'I talk to energy.'"

It's not exactly her chosen profession: She says it chose her. Reaching to the beyond is her gift, she said, a call that she was born to answer. Joyce and her husband Dean, who is a practicing psychiatrist, have developed a brand of psychic counseling that takes its cue from the deceased to exorcise the ghosts from the living.

The pair runs The Crystal Bobcat--a storefront in Morro Bay that serves psychic advice and sometimes responds to reports of paranormal disturbances. For Joyce and Dean, the line between work and home--or work and play, for that matter--has been blurred beyond recognition.

"It's so woven into what I do, but I don't think we live any different from other people," she said. "We don't have candles all over the place, and we don't do smudging."

Joyce has soft features with light eyes set against cream-colored skin, and the warm aura of a mother. She loves ghost stories and readily swaps tales. She refers back to spirits she's known as casually as one would refer to classmates or old flames. But she's also acutely aware of the skepticism surrounding psychics, and doesn't seem at all concerned by it. She addresses the doubts with the same resignation to free will that she allows the spirits: She's not out to change any minds, just to help the open ones. Whether or not Joyce can talk to the dead, she possesses a natural sensitivity to people's emotions and a willingness to connect with them.

The distinction between "dead" and "energy" helps to explain exactly how Joyce says she communicates with spirits: It's not as if a severed voice whispers secrets from the other side--although sometimes they do, she said. More often, she explained, the communication comes as a flash of sound, a vision, or just a feeling. Often the dead present images to her, such as a face from a photograph or a birthday cake. One woman with whom Joyce said she regularly speaks is represented by the feeling of sunflowers. Others relay music, the words of a song, or their first thoughts as they stepped outside their bodies. In any case, the spirits don't just disappear for Joyce after the client is gone.

"They pop back in," she explained. "Some of them I continue to talk to, and they become like guides to me."

Most spirits that Joyce talks with are quite benevolent, she said, and even the scary ones are usually there to help or to bring attention to an unbalanced situation.

Poltergeists, for example, are almost always the result of ongoing trauma in the life of the afflicted, Joyce explained.

"I get a lot of abuse and domestic violence cases," she said, adding that the poltergeists are nonetheless real.

"I've found that I'm sending people to get help with the county or to get medication," she said. "We try to screen theses types of calls for mental illnesses, or abuse."

Possession is another paranormal experience with its roots in the living.

"Some of it is child abuse," Joyce said. "It's a fine line, because I am here to help. I do counsel, but I have to tell people, 'If you're doing something that's reportable, don't tell me--cause I'll report it.'"

Fortunately, the vast majority of Joyce's clients are sane and healthy. They come to her out of curiosity, or with a specific desire to talk with their loved ones once more. Joyce obliges, and in return finds her own peace of mind.

"Every single time, I feel better about my own mortality, and the lives of people I know," she said.