The buzz is at Red Bee: The owners of this cozy Grover Beach coffee spot love Jesus and Joe

We’ve all felt lost and we’ve all searched for meaning in our lives. Somehow, through the storm, we find our way home. And, if we’re lucky, there’s a steaming cup of hot coffee waiting for us at the end of that long journey.

Crosby Moreton, who owns Red Bee Coffee alongside his wife, Miria, would probably add “expertly brewed” to that statement. The award-winning barista and theologian depends on two higher powers daily: Jesus and Joe. 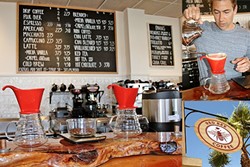 Although the red sign hanging above Grover Beach’s only third-wave coffee joint looks cute and plucky (a red bee hovers below the universal image for caffeine), there’s a deeper meaning to ponder.

“The bee is really a connection to John the Baptist, when he was in the desert eating locust and wild honey,” Crosby said, motioning to an image of John, situated near the door. “After college and before seminary school, I had a lot of years of wandering, praying, and doing ministry in a non-official way. I really connected to John the Baptist. Locusts represent wrath and honey represents promise.”

Now, the couple would probably say that they live in a land of “milk and honey.” Their coffee shop is nestled just a few blocks from the beach, smack dab in the middle of a burgeoning swath of Grover Beach (which includes farm fresh neighbors The Spoon Trade). The couple’s three daughters, Eliya, 5; Levia, 3; and Talya, 1, will one day roam their hometown’s sleepy, safe culs-de-sac dotted with swaying palm trees.

However, it could have all unfolded so differently. You might say that the journey—like John the Baptist’s trek through the desert—was worth it. 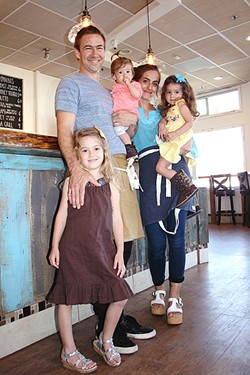 After a lot of post-college soul searching, Crosby followed his heart overseas, where he found an opportunity to deepen his theological passion in France. Crosby would soon meet his Brazilian-Italian wife-to-be Miria, whose family had relocated from Brazil to France when she was 15. Miria was just 17 when she met Crosby, then 30. The year was 2007, and although Miria came from old-school roots (none of the kids had ever brought a boyfriend home before), her family fell head over heals for the American with a penchant for quoting biblical verses.

“We completely fell in love, but he had to go back to California about two weeks after,” Miria said of the whirlwind romance. After about a year of long-distance Skyping, as well as multiple trips across continents, the couple settled on the Central Coast, where Crosby had already found a foothold, thanks to previous schooling he had undergone at Cal Poly.

“We got married on the beach in Pismo,” Miria said between sips of strong Klatch coffee, the only kind offered at Red Bee. “I had come to visit him when I was dating, and coming here—to the Central Coast—felt more like home to me than Paris. It’s so similar to Brazil in the culture. It’s so sunny and the people are so happy and friendly.”

I should note that during our interview no fewer than three people walked up to the coffee shop’s shuttered doors, seeking a drip or cappuccino. Although the couple could not help these folks (at the time, they were only open for limited, soft opening hours), the Moretons made a point to talk to everyone who came in, greeting each potential customer with a genuine smile.

Perhaps it’s Crosby’s barista pedigree (he won the fast-paced Coffee Bean and Tea Leaf Best Barista competition back in the day) or his biblical leanings, but he understands customer service very well. Didn’t Jesus once say something about doing unto others as you would want done unto you?

And although the couple is still hiring personable and friendly staff, Crosby is willing and able to create the perfect foamy layer of crema. In these early days, you’ll totally be able to catch him behind the bar, tumbling the perfect amount of beans onto a scale or finishing a wide-mouthed cup with the perfect swoosh of latte art.

“It’s about so much more than making coffee; it’s about temperature, timing, measuring; it’s about knowing what viscosity you want to pull off that shot of espresso,” Moreton added.

I particularly enjoyed Crosby’s robust and balanced pour over featuring their house Klatch coffee roast (it’s earthy and rich, and not too bright). If you are one of those coffee geeks super into intense third wave coffees, you’ll find all kinds of interesting options here, but—and I promise—you can also sit down with something easy and drinkable while reading the newspaper.

After all, isn’t that what any coffee shop is really about? Re-centering, re-energizing, and connecting?

“We are excited to be part of what is happening in this town and to be that place—that third place—where people can meet up,” Moreton said. “Grover Beach is rising up, and for me, I’m just excited to see what good our family, and what God, can use this place for.”

Hayley Thomas Cain believes drinking good coffee with good people is a spiritual experience. She can be reached at hthomas@newtimesslo.com.