The Cal Poly Creamery is changing things up, and it tastes good

Learn more about Cal Poly's dairy science scene by visiting animalscience.calpoly.edu/dairy-science-0. Or if you just want to look at cheese, you can visit the creamery at calpolycreamery.com.

Blue plastic booties cover my shoes, I've got a white lab coat on, and my curls are tucked haphazardly into a hairnet.

This is the glamorous life of a journalist. I know you're not jealous yet, but you will be. I'm touring the Cal Poly Dairy Innovation Center on May 16, and I've already eaten some deliciously nutty Gouda. See? I'm really only here for the cheese—the hygienic outfit is just a major plus to the trip. 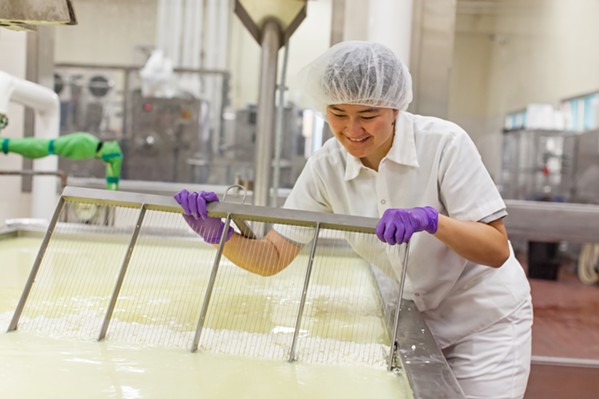 "This truck has been carrying milk across the parking lot for something like 40 years," Johnson says with a laugh. "It barely runs anymore."

Carol Campbell, who's finishing her Master of Professional Studies in Dairy Products Technology, quips that in the year she's been in the program, the windows on that truck had never been rolled up. With Cal Poly stamped across the rump of the tank, the truck brings milk from cows that are literally on the other side of the parking lot to this off-loading area, where the milk gets pumped directly into the dairy through a wall.

The building we're standing in has three purposes for the university: commercial manufacturing, education, and research. Cheese, ice cream, milk, butter, and more gets processed and produced here with undergraduate and graduate students doing the bulk of the work.

As we walk into the production facility, we stop at a hand-washing station that ends with a dip into a chlorine solution. Suddenly, I feel really good about that cheese I tasted earlier. This place is serious about cleanliness, and it's pretty spotless.

The milk truck, like much of the dairy, is in line for an upgrade. Johnson says that the dean of the College of Agriculture, Food, and Environmental Sciences, Andrew Thulin, is committed to upgrading the facility and has slowly been replacing old equipment. A good example is the brand-new cheese vat—which is where cultures are added to the milk and the curds and whey separation process happens—waiting to be unwrapped and put to use. Johnson said the current vat has been used for 50 years and has old motors that need to be replaced. Every knob has to be turned manually. The new vat (similar to the majority of the dairy's new equipment) is programmable, bringing the Cal Poly dairy into the digital century.

"The dean has invested hundreds of thousands of dollars in updating outdated equipment," Johnson says, "so that our students are working on the same machines as they would in the industry."

Cal Poly isn't just making its dairy on par with new technology, Johnson is pushing the cheesemaking operation to a new level. Thulin, Johnson said, challenged the creamery and other units with the college to make products that Cal Poly can be really proud of. In fall 2018, the Cal Poly Creamery introduced three new cheeses: Bella Montaña, a sweet cheddar-like cheese; Grand Gouda, which took third place in the March 2019 U.S. Cheese Championship Contest in Green Bay, Wisconsin; and Seven Sisters, inspired by European cheeses such as havarti. 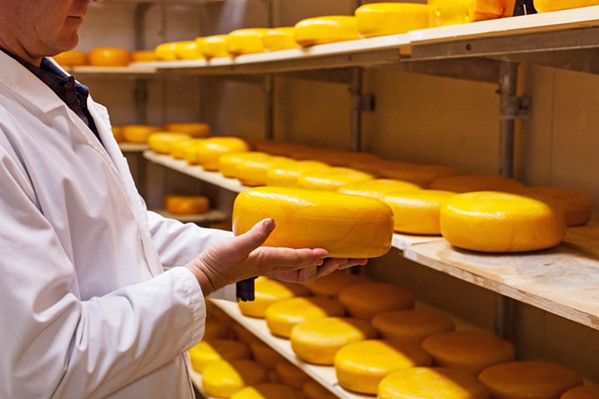 There are thousands of cheeses, Johnson says, and each cheese gets its special characteristics from its type of milk, the specific strains of bacterial cultures used to turn it into cheese, and brines and salts. Those simple differences will produce a soft-rinded cheese like a Camembert or a hard nutty cheese like Parmesan.

"It's a delicate dance between those variables, salt, acidity, and moistures," Johnson says. "Different conditions flavor the growth of different cultures."

The Grand Gouda replaced what Johnson called a pedestrian Gouda, one that was crafted, vacuum-sealed in plastic, and placed in the refrigerator. Cal Poly's new Gouda is handled a little differently. It's crafted, coated in a waxy rind, and placed in an aging room where it occasionally gets handled, flipped, or wiped down with a special brine as it ages.

Dairy Products Technology grad student Patricia Lai, who will be interning at Land O'Lakes in Ohio this summer, says that vacuum sealing cheese in plastic doesn't really allow the cheese to breath the way that a rind does. Breathing allows the unpleasant flavors and moisture to evaporate over time.

"You get much more complex flavors," she says.

Students like Lai and Campbell are intimately involved in the process. They made cheddar cheese today as part of one of their classes. Students build the cheeses, care for them, and watch them age either through classes or their work in the commercial dairy.

Lai started her student career with a bachelor's degree in engineering, took an elective course in food engineering, and was hooked. It was sort of a happy accident, she says. Food, she says, is about providing nourishment. Big industry feeds the masses she says. Milk is a versatile product, and somehow large-scale commercial producers have to maintain quality on a large scale. "How to maintain this whole industry and production," she says is what interests her.

Campbell is sort of the opposite. Although most students are destined to work in the larger-scale dairy industry like Lai, Campbell will be interning at the artisanal Beehive Cheese in Utah.

This is career two for her, Campbell says. Career one was in music performance. She says that she knew the second career would also need to involve a level of creativity. Cheese is a versatile product, and it's also something special that takes an investment of time and thought, Campbell says.

"Artisan cheese has been my interest and my motivation since the get-go," Campbell says. "I'm looking for just the right small place to be a big part of what they're doing." Δ

Editor Camillia Lanham is just a small cog in a cheese wheel. Send comments to clanham@newtimesslo.com.