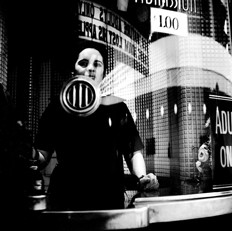 Everything about the Vivian Maier story has a certain strangeness to it. A reclusive street photographer, unknown in her lifetime, Maier became a posthumous celebrity in the art world after her work was discovered in 2007. Born in Manhattan but raised in France, Maier returned to America as an adult. A nanny by day, Maier took thousands upon thousands of pictures, leaving many of them undeveloped. Shortly before her death, she stopped paying the rent on the Chicago storage space where the photos, negatives, and rolls of film were kept. At an auction, her life’s work was divided among several buyers, none of whom understood its value at first. She died before any of them could get in touch with her.

Over the years since then, however, Maier has become a sensation, compared to Gary Winogrand, Henri Cartier-Bresson, Robert Frank, and Diane Arbus. The Internet began giddily awaiting each new Maier photograph to be developed, scanned, and published online. With such an enormous body of work, this is a lengthy process: Chicago native John Maloof, a former real estate agent, owns the lion’s share, with 100,000 negatives. Jeffrey Goldstein owns 12,000 and several home videos.

Maier’s work has now been exhibited all over the world. Two documentaries have emerged—one from the BBC, another by Maloof—and several books of her work have been published.

The Cal Poly University Art Gallery now has the unique opportunity to show 40 images of Maier’s work. Most, if not all, were taken in Chicago, where Maier spent most of her adult life. Shot in gorgeous black and white, the pictures are a record of what Maier found captivating, beautiful, gross, and comical about urban life in the ’60s and ’70s. The sheer talent, wit, and expertise on display here is baffling—and considering that Maier was by all accounts an untrained amateur, it’s almost unbelievable. As far as anyone seems to know (and at this point the media has done a very thorough job of tracking down anyone who might have known anything about Maier), she hardly showed her photos to anyone—even though one of the mothers she worked for was a photo editor at a magazine. And she never exhibited her work. 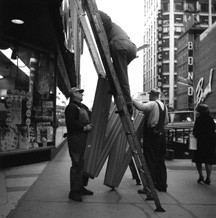 Yet this assumed lack of formal training is not at all apparent in her pictures, which are beautifully lit and poetically composed, revealing an eye for the passing whimsy of the street.

She captured grown men in suits, asleep on benches, trains, and on the beach. She found a visual rhyme in the figure of a wizened man and a wrinkled paper bag, both of them inclining ever so slightly in the same direction. Some images in this exhibit show a kind of shyness: She would photograph people from behind, or people who weren’t looking; often getting close enough for the silhouette of her wide-brimmed hat to cast a shadow. Maier used a Rolleiflex camera that she wore around her neck, looking down into the viewfinder from above rather than holding the camera to her face, and so her subjects may not have registered immediately that they were being immortalized.

Other images, however, are confrontational, and her subjects return intense and downright frightening looks. A burly man leans against a pole, his expression almost dangerous, yet this gruffness is belied by the tenderness with which he cradles a small dog, which closes its eyes in a look of bliss. The man’s surly exterior and warm heart seem united in one instant.

Maier worked with upper-class families in Chicago, but on her days off would take the train downtown, wandering among teenagers, street musicians, the homeless, and the poor. From her images, she seems to have been interested in outcasts and misfits. The photos also reveal an egalitarian eye; taking in the old and young, white and black, businessmen and tramps with equal fascination.

She also seems to have been drawn to strange sights, like that of a garbage can full of discarded marquee light bulbs (which gleam like a nest full of eggs), or a curious reflection on the window of the a ticket booth, looking almost like smoke pouring from the mouth of the clerk behind the glass.

But we can only speculate on what Maier herself would have chosen to exhibit, and how she would have wanted the work presented, and this is what remains problematic about any exhibit of her work. Likewise, it is certainly true that Maier’s work emulates that of Cartier-Bresson, Arbus, or Winogrand, and she is frequently compared to such artists both favorably—by champions of her work—and negatively, by those who say her work is too close to these masters to be considered truly groundbreaking. Yet this resemblance may also be the result of curators selecting the work that reminds them of the master street photographers. Maier’s canon is so vast and unedited that were she alive today, she might have chosen to exhibit a vastly different collection.

Instead, the University Art Gallery exhibit has been curated, curiously enough, by Wilco member Pat Sansone, who originally selected the 40 images for an exhibit coinciding with the Wilco Solid Sound Festival, which took place at the Massachusetts MOCA in 2011.

This odd fact is par for the course, however, in the Vivian Maier story. Hers is the classic artist’s fate: Unknown in life and celebrated after her death.