Have y'all been to the California Mid-State Fair yet? It started a couple of days ago, which means you missed the Miss California Mid-State Fair Scholarship Pageant on Tuesday, July 16, the Open Sheep Show (Wool Breeds, Hair Sheep, and Heritage Breeds) and Pig Races on Wednesday, July 17. If you're reading this early enough, you may be able to make the 9 a.m. Cow Dog Trials or the Petting Zoo and Pony Rides at noon on Thursday, July 18, which will also see venerated local performer Monte Mills and the Lucky Horseshoe Band in the Mission Square at 7 p.m., amazing vocal harmony act Home Free on the Fort Frontier Stage at 6:30 and 8:30 p.m., and Pat Benatar and Neil Giraldo with Melissa Etheridge on the Chumash Grandstand (7:30 p.m.; all ages; $26 to $71 at midstatefair.com).

On Friday, July 19, see Shawn Barker's Johnny Cash tribute The Man in Black on the Fort Frontier Stage at 6:30 and 8:30 p.m.; Bear Market Riot at 7 p.m. in Mission Square; or Billy Idol on the Chumash Grandstand Arena (7:30 p.m.; all ages; $26-$91 at midstatefair.com). Idol was part of the mid-'70s London punk scene as a member of Generation X before going onto his solo career that generated hits such as "Dancing with Myself," "White Wedding," "Rebel Yell," "Mony Mony," "Eyes Without A Face," "Flesh For Fantasy," and "Cradle Of Love," making him a ubiquitous presence on the then newly created MTV. His newest album is 2014's Kings & Queens of the Underground.

On Saturday, July 20, The Fabulous Thunderbirds play the Fort Frontier Stage at 6:30 and 8:30 p.m. "Tuff Enuff" and "Wrap It Up" are a couple of their biggest hits. Local indie rock, pop, and soul act B & The Hive plays Mission Square at 7 p.m. Cardi B is sold out.

On Monday, July 22, Grammy Award nominee and Dove Award winner Danny Gokey plays the Fort Frontier Stage at 6:30 and 8:30 p.m. He also had a run on season 8 of American Idol, and he released his fifth studio album, Haven't Seen It Yet, earlier this year. Local blues powerhouse Code Blues plays Mission Square at 7 p.m. Boy band Why Don't We plays the Chumash Grandstand Arena (7:30 p.m.; all ages; $26 to $71 at midstatefair.com). The group's latest EP, Why Don't We Just, hit No. 1 on the iTunes Pop chart. Eben will open the show. 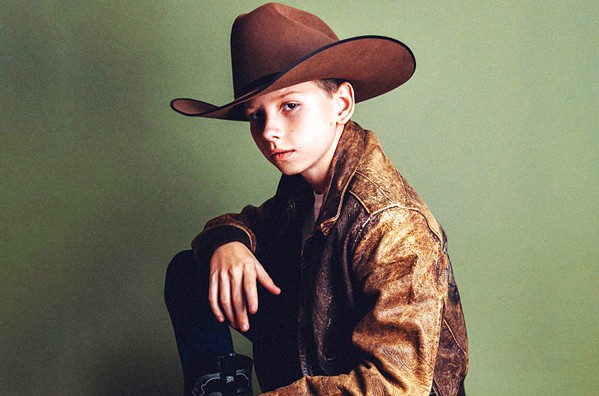 On Tuesday, July 23, 12-year-old Mason Ramsey plays the Fort Frontier Stage at 6:30 and 8:30 p.m. He became a viral sensation after a video of him yodeling showed up on social media. Since then he's played the Grand Ole Opry, Coachella, and Stagecoach. Local singer-songwriter Graybill plays Mission Square at 7 p.m. Iconic Southern rock icons Lynyrd Skynyrd plays the Chumash Grandstand Arena (7:30 p.m.; $41 to $101 at midstatefair.com). It's the only concert you can yell, "Play 'Free Bird,'" and not be a total tool. You can also yell, "Play 'Sweet Home Alabama,' 'Simple Man,' 'Gimme Three Steps,' 'What's Your Name,' 'Call Me The Breeze,' and 'You Got that Right.'" Chris Janson opens the show. 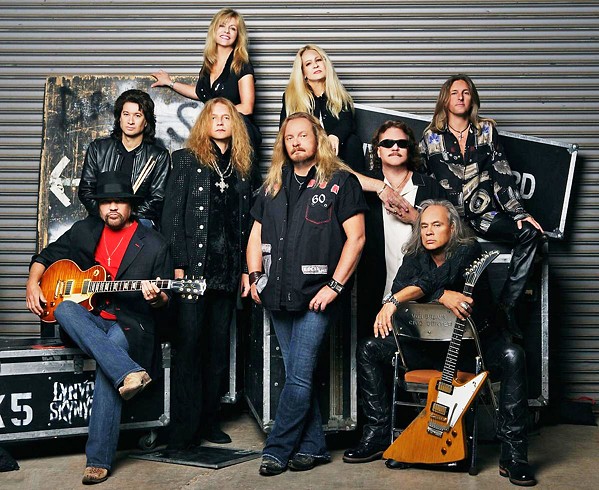 "Being back in California is the best feeling. I grew up in Visalia, so the Mid-State Fair is the closest thing I'll have to a hometown show. It will be great to reconnect with family and friends, and to just breathe in that awesome coastal air!" Zac Brown bassist Matt Mangano said. "So far The Owl Tour is shaping up to be one of our best tours in recent memory. The music is strong, the band is playing together better than ever, and the visuals are pretty stunning. For me, the highlight of the tour is playing the new songs. There are a lot of groove-oriented songs, and those are really fun to play, especially for the bass player."

There's no opener for this show so get there on time!

The Mother Hips were just Chico State students when they formed and caught the attention of über-producer Rick Rubin, who originally signed the band 25 years ago. Over the years, they've recorded 10 stunning studio albums that carry on the traditions of Laurel Canyon bands like Buffalo Springfield and The Beach Boys. 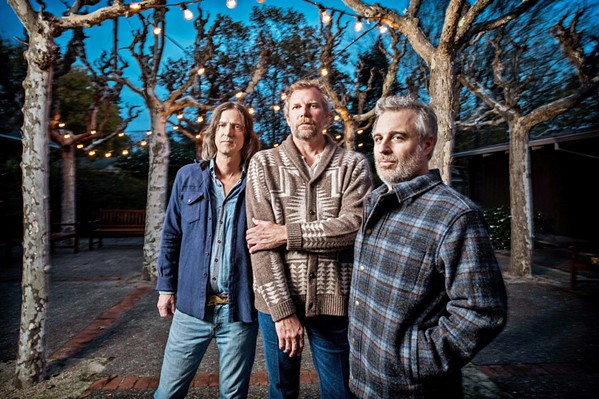 Their newest, Chorus, is filled with great songs like the opening ballad, "Clean Me Up," with its vocal harmonies and swirling psychedelic guitar sounds. Numbskull and Good Medicine Presents bring The Mother Hips to BarrelHouse Brewing on Friday, July 19 (6 p.m.; all ages; $22 presale or $25 at the door at Boo Boo's and ticketfly.com).

The Gipsy All Stars and The Solstice Sisters play the SLO Brew Rock Event Center on Sunday, July 21 (noon to 5 p.m.; free or $20 for wine tasting) for the first annual Barreled Craft Wine Market hosted by SLO Brew and Makeshift Makers Market, who are "partnering to host live music, intimate craft wine tasting, and a full afternoon of small business shopping," organizers said. "Folks of all ages are invited to peruse a wide selection of market vendors while enjoying performances from The Gipsy All Stars and The Solstice Sisters. Expect a photo booth decked with all the fixings, a braid bar, and an afternoon filled with interactive activities."

Former President Bill Clinton called them one of the "most important bands in music since the dawn of the rock 'n' roll era." They formed in 1967 in the Windy City. They had mega hits with "Saturday In The Park," "Feelin' Stronger Every Day," and "Make Me Smile." They describe themselves as a rock band with horns. Still don't know who I'm talking about? Chicago! A band that's sold 100-plus million records and recorded 23 gold, 18 platinum, and eight multi-platinum albums!

Billboard ranks Chicago at No. 13 in its list of top 100 for Hot 100 Singles chart success and ninth for greatest artists of all time in terms of Billboard 200 album chart success. They were also inducted into the Rock and Roll Hall of Fame in 2016. They released 24 studio albums, most recently Chicago XXXVI: Now. Don't worry. They know how Roman numerals work. It's their 36th album overall, including live albums and compilations.

Chicago is one of the longest-running rock bands in history, and they play the Vina Robles Amphitheatre on Wednesday, July 24 (8 p.m.; all ages; $45 to $95 at vinaroblesamphitheatre.com). Great songs, phat horns, and iconic musicians!

SLOfolks hosts Radio Free Honduras, a collective of Chicago musicians playing salsa and cha-cha and supporting the artistry of Charlie Baran and his mix of originals as well as a variety of reimagined covers, plays Castoro Cellars on Saturday, July 20 (7 p.m.; all ages; $25 at (805) 238-0724 or castorocellars.com/events).

Funk-jazz act Functus reunites this Wednesday, July 24, for a rare show at The Siren (7 p.m.; 21-and-older; free). Inspired by music from Medeski, Martin and Wood, 1970s electric Miles Davis, James Brown, and Parliament/Funkadelic, the band was a hot ticket in SLO Town circa 1990s. 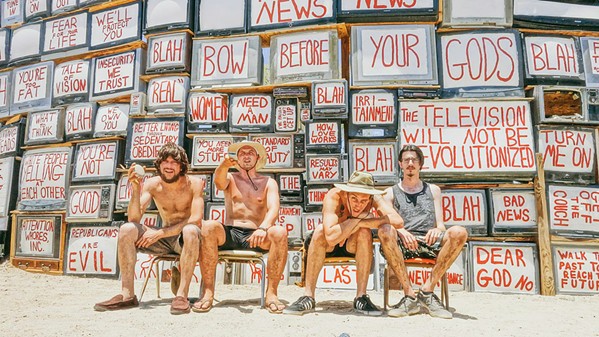 The Happys bring their "dysfunctional surf pop grunge" to Frog and Peach on Wednesday, July 24 (10 p.m.; 21-and-older; free). Sounds like a fun one! Δ