The case of the disappearing director 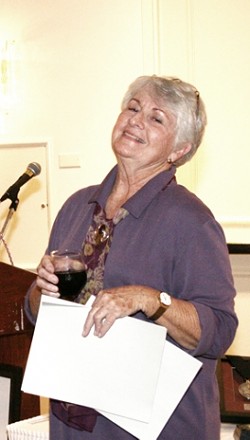 #
Â Â Â  Last fall, on September 26, Kaye Mickelson left her husband, her home, and her job, and vanished into thin air. Since 2002, Mickelson worked as the executive director of the SLO County Medical Society, a nonprofit group that represents the interests of physicians and public health. Mickelsonâ€™s sudden disappearance has prompted the group to take a closer look at how itâ€™s been managing public funds.
Â Â Â  Soon after Mickelson failed to show up to work, members of the society grew concerned about her safety. Larry Mickelson, her husband of 43 years, filed a missing personâ€™s report with the SLO County Sheriffâ€™s Department.
Â Â Â  â€œInitially we were quite fearful for her safety,â€? says Dr. Andrew Anthony, the former president of the medical society. â€œWhen she first moved on, the sheriffâ€™s department was contacted for missing person issues. When they were apparently able to locate her and found out she was basically gone out of her own volition, they were done with it.â€?
Â Â Â  Sheriffâ€™s department spokesman Brian Hascall confirms that detectives located Mickelson through bank transaction records, but will not say where they found her. â€œShe was safe at that point, so the missing person case was closed,â€? says Hascall. (Larry Mickelson refuses to comment for this story.)
Â Â Â  Just after she left her husband and her job, Mickelson filed for divorce. Court documents show that Mickelson asked for their house in San Luis Obispo and her Toyota, while her husband Larry chose to keep the house in Templeton, along with multiple other vehicles. The coupleâ€™s money has been divided between them. (Calls and emails to Kaye Mickelson and her attorney have not been returned.)
Â Â Â  The board of the medical society has not been able to contact Mickelson either, and says it has no idea why she left. But her unexplained departure has compelled the group to more closely examine its books. The board has hired a certified public accountant to conduct a compilation of all the groupâ€™s transactions. â€œWe did notice some transactions that didnâ€™t immediately add up,â€? says Anthony, now president of the Society Group Foundation, a subsidiary of the medical society. â€œWhen we became aware that there might be significant concerns we actually notified the county.â€?
Â Â Â  The county contracts the handling of certain funds to the foundation, a 501(c)3 nonprofit devoted to the purpose of the medical society. The medical society contacted Gail Wilcox, a deputy county administrative officer who works closely with health care agencies. Wilcox says the foundation manages two streams of public funds. Combined, the monies collected through tobacco lawsuit settlements, and monies collected through court fines that are transferred to the countyâ€™s emergency medical service fund, amount to about $1 million annually managed on behalf of the county. After ER doctors treat uninsured patients, they bill the foundation, which reimburses them with public funds.
Â Â Â  County funds are supposed to be kept separate from the private funds of the society and foundation, but Wilcox says, â€œTheyâ€™ve [Anthony and current medical society president Dr. Paul Christensen] confirmed with me there has been commingling of funds.â€? Anthony also confirms that some public funds were placed in the wrong accounts. â€œAnd that was never set up that way,â€? Dr. Anthony explains. â€œSo we knew, that at that point, we were in violation of statute, and thatâ€™s when we went to the county to let them know the situation.â€?
Â Â Â  Wilcox says she has confidence in the current board of the medical society. â€œThey were clearly surprised and clearly disappointed with what they found out. They were very cooperative with me. They understand weâ€™re talking about public funds and we need to account for every last dollar.â€? Anthony says the medical societyâ€™s own internal review should be finished in three to four months.
Â Â Â  â€œRight now,â€? says Gere Sibbach, SLO County Auditor-Controller, â€œrather than us stepping in and expending taxpayer funds to investigate these things, weâ€™re waiting to see the results of their own investigations and then weâ€™ll decide if we need to do anything else.â€?
Â Â Â  Looking back at all of the groupâ€™s transactions since 2002 is no easy task. â€œYou can imagine copying checks front and back and all that kind of stuff, very, very, very labor intensive,â€? says Anthony.
Gail Wilcox says, â€œDr. Christensen and Dr. Anthony are both very cooperative. They 100 percent understand our position and are committed to paying back anything should they find it was misused.â€?
Â Â Â  Anthony says Mickelsonâ€™s unexpected departure â€œhugelyâ€? rocked the boat. Besides the potential fiscal problems the group is now dealing with, thereâ€™s also the day-to-day operations. â€œOur main focus is to move forward,â€? says interim executive director Nikki Hochhauser.
Â Â Â  While the medical society has not been able to reach Mickelson, she may still be in the San Luis Obispo area. Anthony says that she has been seen locally, but qualified that by saying it was â€œvery third-hand information.â€?
Â Â Â  â€œWe want people to understand the medical society and trust it as an organization,â€? says Anthony. â€œ[But] weâ€™ve got some house cleaning to do.â€?