This restaurant will please the most discerning palates

Central Coast wine regions are attracting top notch chefs who want to be part of this blossoming wine community, as I was reminded by an extraordinary experience in the newest fine dining establishment to open on the Central Coast. I enjoyed an impressive meal with my husband Dan at the stately Cass House in Cayucos, which was impeccable in every way, from the food and wines set before us to the perfect service. 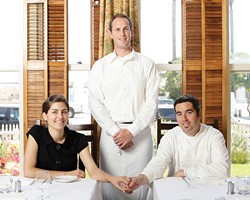 In fact it reminded me of Mix restaurant at “THEhotel” (at the Mandalay Resort) in Las Vegas, where we enjoyed the finest dining experience we’ve had anywhere. While visiting Vegas last December we discovered Mix, owned by the world famous French chef Alain Ducasse, whose Paris and Monaco restaurants rate three Michelin stars. Even in Las Vegas his restaurant exceeded my expectations in food, wine and service. Yet when I was seated in the Cass House dining room, where the talented chef Jensen Lorenzen is now offering his impressive creations, our dinner compared to that special dinner at Mix. Of course it’s not just the chef’s fine cuisine that makes dining here unforgettable; it’s the entire team, from his fianc»e Grace Wingett to the sous chefs and the wait staff.

Cass House, obviously, is not an eatery for a quick bite or a cheap meal, but it is well worth visiting often. I believe it’s exactly what the talented chef Frank Mendoza wanted to do at Seven Hands on Higuera, that short-lived, amazing dining establishment in SLO. Unfortunately it was ahead of its time. But Lorenzen had the opportunity to work with Mendoza in the kitchen. Then an intern, he admits he learned to look at the restaurant kitchen in a way he never had before. It clearly influenced this talented young chef, who puts his heart and soul into every dish he creates: his amuse bouche of duck rillettes in housemade puff pastry, for example, each of which are consumed in one delicious bite.

Lorenzen’s new menu offers a choice of three or four courses prixe fixe, which are priced at $48 and $56, respectively. Without hesitation, Dan and I both ordered the four-course menu, asking for different dishes so we could try most of the fine dishes offered that night. We started with the spring pea soup, with chevre (goat cheese) dumpling, green garlic-ramp pistou and chive blossoms. We enjoyed the intensely flavored soup, and the two salads following were even more exciting.

The Cass greens, freshly harvested from the garden behind the house that’s farmed by Wingett’s twin sister Carla Wingett, was a wonderful combination of fresh beets, fennel, spring herbs, English peas and chevre tossed in yuzu vinaigrette. And the market stone fruit salad, a combination of apricot, nectarine, white peach, cherries, walnuts and bleu cheese with Stoltey’s honey, was a totally new combination for me and quite refreshing. What they can’t grow themselves is brought in fresh from local farms.

Lorenzen and Wingett’s first restaurant was Papillon in Los Osos. After visiting that small and cozy restaurant, formerly the Salty Pelican, I raved about this passionate young couple and their eatery in Cuisine two years ago. After two very successful years there the young duo, 27 and 24 respectively, were offered a fabulous opportunity to upgrade their dining establishment by moving to Cass House. Rather than bring along the old name, they’ve stayed with what Wingett described as the “deep rooted history of the 140-year-old house,” which was remodeled in 2007 as a luxury inn. They also manage the inn with its five beautiful and luxurious rooms, ranging from $175 to $375, including full breakfast and wine and cheese tasting in the afternoon.

“It’s different from what we were doing at Papillon, which was a casual bistro,” Wingett explained. “We wanted the whole experience of the inn and restaurant to be one. Here we make our own butter and bread and keep everything local, focusing on each individual component.”

The Cass House is owned by Gary and Nancy Bagnall, who meticulously restored the old estate to its full splendor. Originally built in 1867 for English-born Captain James Cass, who founded Cayucos, it became the cultural center in the seaside hamlet. A century after the San Francisco “Stick Style” house was built it had fallen into decline. It was rescued in 1995 when the Bagnall’s purchased it and began recovering everything savable, from the staircase banister to the light fixtures and Victorian mantle. They spared no expense in restoring it. After bringing on Wingett and Jensen, who remodeled the kitchen so it’s better suited for his professional team, they re-opened in May. With these passionate people running Cass House, it will undoubtedly become the center of public focus once again.

Daniel Green, our waiter, who’s also the dining room manager, provided impeccable service. He’s engaging, interested in his guests and never intrusive. When he sets down your plate he leaves you in peace to enjoy it without interruption, but he’s right there should you need him. He so skillfully explained the menu and the wines, I allowed him to choose the wines for our meal. I never do that if I don’t have faith in the server’s experience. He impressed me. 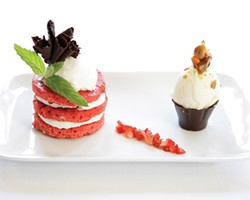 Both of our entr»es impressed: fried, free-range chicken breast wrapped around mushroom duxelles with a saut» of baby vegetables at the peak of freshness; and an irresistible maple-brined pork tenderloin with Calvados jus, stone-fruit chutney and a delightful kale cooked with Nueske bacon. Daniel paired the main courses beautifully with a rare Austrian Loimer ’05 Pinot Noir “Terrassen.” The reasonably-priced wines by-the-glass range from $6 to $13.50, lower than most upscale restaurants.

The dessert list, made by pastry chef Christina Davidson, offered a whimsical trio of French macaroon ice cream sandwiches. But it was every bit adult in taste with each interesting new flavor: vanilla blueberry, rose ginger, and chocolate Earl Grey. It’s also quite the attention grabber as servers carry them across the dining room. It was a perfectly suitable and satisfying ending to a dining experience that has me eager to return soon to try more of Lorenzen’s fine cuisine.