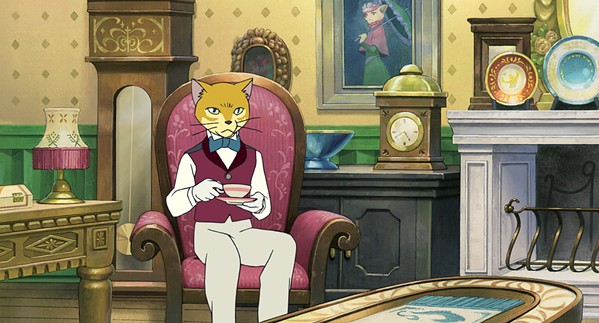 I think most fans of The Princess Bride will immediately recognize Cary Elwes' distinct voice at the start of The Cat Returns. Elwes plays the Baron, a gentlemanly, humanized cat who often sports a top hat, suit, and bowtie.

As the film's title suggests, The Cat Returns is not the Baron's first rodeo in the land of Studio Ghibli—the brand responsible for Princess Mononoke, Spirited Away, and countless other classics. Elwes originated the role in Whisper of the Heart in 1995, which just happens to be my all-time favorite Ghibli film.

During his first adventure in Whisper of the Heart, the Baron exists purely within the imagination of the film's human protagonist. But The Cat Returns provides the Baron with a fully realized world of his own, full of enchantment and other anthropomorphic felines, one of whom is brought to life by the deliciously devilish Tim Curry.

In celebration of its 20th anniversary, The Cat Returns is briefly screening in select theaters across the country. It's also currently available on HBO Max. (90 min) Δ