The Central Coast Aquarium is fascinating and educational

The Central Coast Aquarium, located at 50 San Juan St., in Avila Beach, is open Tuesday through Sunday, from 10 a.m. to 4 p.m. General admission is $8. Call for more information or to arrange special events at (805) 595-7280, or visit centralcoastaquarium.com for more info.

It's Friday, April 13, and I'm visiting the Central Coast Aquarium for the very first time. My wife and I drive by the bright aqua-blue building at the far end of Avila Beach every weekend on our way to take our dogs to the beach, but until today we've never been inside. 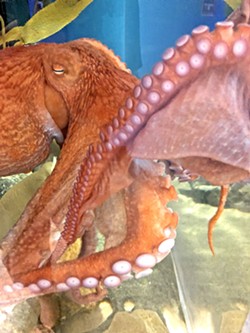 Director of Programs Travis Norton greets us as we walk in, explaining that it's a little slow today so we'll get a private tour from Aquarium Coordinator Jami Clayton. After passing through the foyer, we enter the aquarium and are introduced to Joan, a giant Pacific octopus, who's actively exploring her 450-gallon tank.

"Joan was donated by a local fisherman," Jami says, "and we'll keep her about a year before returning her to the ocean. They're about as smart as a 4-year-old. Joan is pretty young and weighs about 20 pounds, but a full-grown giant Pacific octopus can grow to 110 pounds and 16 feet across. The biggest ever found weighed 500 pounds and was 30 feet across."

Jami really knows her stuff, and she explains that Joan was named after one of the aquarium's major donors, Joan Sargen. The nonprofit survives off of the patronage of people like Sargen as well as annual fundraisers such as the Catch of the Central Coast, an event held every fall at the Avila Beach Golf Resort across the street.

Next we visit the tanks, one of which has a sign that reads "Observation Tank Only. Please No Touching." It's filled with beautiful sea anemones. The tank next door, however, is for touching, and Jami pulls out a starfish, a sea cucumber, and some spiny thing that feels like it's covered with toothpicks. Jami knows all about every single creature, but there's so much info I can't keep up. All I know is the sea cucumber feels weird and squishy.

There's also a lobster in there, and I point to it and tell Jami, "I'll have that one with drawn butter, please," because I'm hilarious like that. My wife rolls her eyes and apologizes for me. 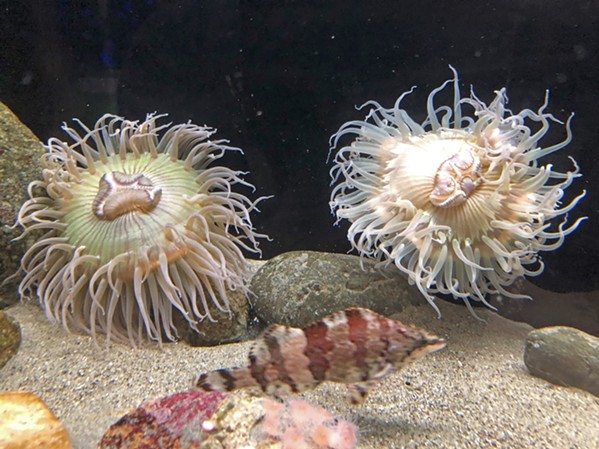 In the next room there's another octopus, a little fish that hides in kelp, and some flat-bottom fish with cockeyed eyes on their heads. Jami explains that they're born with eyes on each side and they swim upright, but later they turn to one side and one of the eyes migrates to the other side. Crazy, right?

There's a cylindrical aquarium with a faux pier pylon surrounded by fish like a bright orange garibaldi, which are in abundance around Catalina Island. There's also a tank with some sharks that don't have to swim to live. They just sit on the bottom, and Jami picks one up so we can feel its skin. Yes, I touched a shark and lived!

There's also a wall of jellyfish, with three tanks of their development stages—polyps, ephyrae, and medusae—but my favorite tank is the last one, which is filled with a variety of very active sharks, skates, and one shy eel. We happen to have timed it right, and Jami explains it's feeding time.

"This is restaurant-quality calamari," she says, as she uses a reacher and grabber to feed the sharks one at a time. She even manages to coax the eel out of its nook for a quick bite. The tank also contains a bunch of horseshoe crabs, the aquarium's only non-native species, which come from the East Coast and are considered a "living fossil" since they've remained unchanged for 400 million years. They're older than dinosaurs! When you see them from the underside, they look a lot like the creature that attaches to your face in the Alien films. Shudder!

This little aquarium might not be as big as the one in Monterey Bay, but it's just as well maintained and cared for, and the critters seem comfy. It's a local gem!

FEEDING FRENZY  Get to the Central Coast Aquarium at the right time of day and you’ll get to see the sharks, fish, and even the eel (if you’re lucky) have a mid-day snack. Video By Glen Starkey