The Central Coast has a thriving LGBTQ community, so where are all the gay bars?

As a teen, Rory Uribe fantasized about going to a gay bar or club and finally being able to be unabashedly gay in public.

Uribe, who uses nonbinary pronouns, has lived in Santa Maria their whole life, and it hasn't always felt like the most accepting or inclusive place for the LGBTQ population. Though Uribe came out to their parents and friends during high school, they still don't feel totally accepted in Santa Maria or by their family. 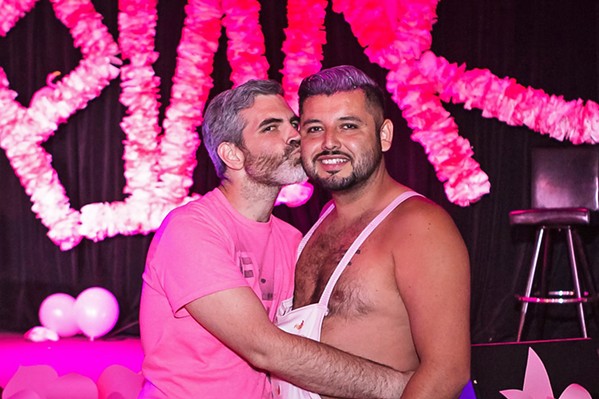 So Uribe always thought the gay bars in Santa Barbara and San Luis Obispo counties would provide that much-needed and missing support system and network.

"I've dreamed of going to a gay bar since I was like, 16," Uribe told New Times. "And I was unpleasantly surprised when I turned 21 and found out there aren't any here."

The lack of LGBTQ-specific nightlife on the Central Coast is an issue much of the local gay and trans community is forced to work around. Santa Barbara's once thriving gay club scene dwindled, and eventually completely disappeared, as varying sexual orientations and gender identities became more widely accepted and dating apps became more readily available.

Those completely safe and inclusive spaces are less of a necessity for the LGBTQ community as a whole now, and that's positive progress.

But it's left the Central Coast without a gay bar in reach—the nearest (according to rumor and Google) are in Ventura, Fresno, and San Jose—and many locals say the safety gay bars and clubs provide is still very much needed, especially in the more conservative portions of the state.

Uribe, who is now a student at Allan Hancock College, finally made their gay bar dream come true this spring while visiting a friend in San Francisco. It was "a lot," Uribe said, laughing, but overall it was a great experience, and it's one that's missing for young LGBTQ people locally.

Like so many other LGBTQ residents in the area and across the nation, Uribe helped start an organization dedicated to giving gay, trans, and queer individuals a safe space to meet up and build support systems. Uribe and other Hancock students revitalized the school's long idle Queers and Allies Club last year, and the group regularly hosts meetings, coffee meetups, and parties, which Uribe dubbed "gay bashes." 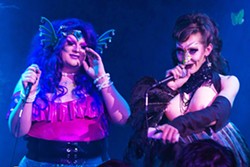 Sometimes those events are on campus or in someone's home, and sometimes they're at restaurants or bars. When the club goes out, Uribe said they have to be careful about where to go and how open to be.

"And it would be nice to have a space to go and just know that everyone could accept us," they said.

That's an issue a lot of locals run into, including the owners of SLOQueerdos, an organization that puts on monthly drag shows and other LGBTQ-inclusive parties on the Central Coast.

Co-owner Frank Dominguez initially started SLOQueerdos a few years ago when he moved back to the Central Coast after living in bigger cities for several years. Dominguez grew up in Nipomo and when he returned to the area, it was as if nothing had changed.

He wanted to spice things up by starting a group that would make it easier for local LGBTQ individuals to meet, and was mulling over the idea one day when he walked into the now closed Metro Brewing Company in San Luis Obispo and just happened to spot two gay couples inside.

It wasn't, but Metro Brewing let Dominguez host several of his first SLOQueerdos parties and drag shows at the bar. There were about 60 people at the first show in October 2016, he said, double made it to the next, and more than 200 attended the third. Since then, SLOQueerdos has hosted successful shows and events across the Central Coast each month and on special occasions.

But Dominguez said it hasn't always been easy to find venues. While some local businesses—including SLO Brew and The Siren in Morro Bay—are incredibly supportive, others aren't.

One bar owner told SLOQueerdos that he didn't want his establishment to be known as a gay bar, Dominguez said. One business in Santa Maria allowed SLOQueerdos to host an event there, but shut down the whole bar and called it a "private event."

He's heard it all, but said business owners typically say they don't want to "alienate" their other customers. Dominguez said the whole system of bars on the Central Coast and in the nation caters to heterosexual, cisgendered people. If anyone is being alienated, he said, it's the LGBTQ community.

Still, Dominguez and his partner—in business and life—Daniel Gomez, who also co-owns SLOQueerdos, agree that opening a gay bar on the Central Coast would be challenging. Rent is costly, liquor licenses are hard to come by, and they questioned whether a gay bar in SLO would have enough consistent business to stay open.

While gay bars do provide LGBTQ communities with essential social opportunities, Gomez said it's easier than ever to link up through readily accessible online dating apps like Tinder and Grindr.

"There's this whole digital world at your fingertips," Gomez said. "But at the same time, people do want to dance and stuff like that. I think [online dating] has a huge impact on the gay club scene."

Longtime Santa Barbara residents John Chufar and Robert Johns said dating apps have had a noticeable impact on the younger generations of the LGBTQ community.

Chufar and Johns are married, and they're both board members at Santa Barbara's Gay and Lesbian Business Association, a nonprofit that funds scholarships it awards each year to college-bound and vocational students across the county.

The organization was orgianally created in the '80s to support gay- and lesbian-owned businesses in the area. As gayness gradually became more widely accepted, so did gay businesses, and that arm of the nonprofit eventually halted its work. The same thing happened with Santa Barbara's gay nightlife, Chufar and Johns said.

"I used to go out six nights a week just for the dancing," Johns said.

Some Santa Barbara bars still host drag shows or LGBTQ-specific events. The Wildcat Lounge hosts "gay nights" every Sunday, but Johns said, "who wants to go out on a Sunday?"

A number of organizations in Santa Barbara also offer LGBTQ-friendly programs and events, such as camping and movie nights, that are becoming more popular social outlets. Those are great, but Chufar and Johns said they've noticed that younger kids attending the events spend a lot of time alone on their phones.

Younger generations are using dating apps to find other gays in town now rather than gay bars, and Chufar and Johns said that's OK. Those once uniquely safe spaces aren't as needed in places like Santa Barbara anymore.

"We're more or less accepted here," Chufar said, adding that he and Johns are members of the Santa Barbara Elks Club.

"If you can imagine that!" Johns said with a laugh.

But that's not necessarily true in other, more conservative swaths of the Central Coast, according to representatives of the House of Pride and Equality (HOPE), a Santa Maria-based organization dedicated to creating safe spaces for the local gay and trans community.

Cee Chavez works with HOPE, and said that while she might occasionaly see openly gay couples in North County, it's not as predominate or accepted as in South County.

"It's not as welcoming here to go out," Chavez said. "I wouldn't go out with my girlfriend here and feel the same as I would if I went out in Santa Barbara."

That gets at the core of why HOPE started a few years ago, according to Audy Macdonald, a founding member of the organization. There just weren't many spaces for the LGBTQ community to meet up and have fun in Santa Maria, and while bars and clubs might present issues for those struggling with alcohol and addiction issues, HOPE's monthly meetups are typically held at coffee shops, restaurants, or in Macdonald's home.

Booze is typically expected at an after party, though, and HOPE hosts a party and drag show each year after its Pride festival.

That almost didn't even happen last year because it was so difficult to find a willing venue in the Santa Maria Valley. Macdonald said HOPE finally made a connection with the events coordinator at Presqu'ile Winery mere weeks before the show date.

That wouldn't be a problem if there was a gay bar somewhere in the area, according to Anthony Loverde, another HOPE official. Loverde said there will always be a need for some kind of LGBTQ safe space because there will always be LGBTQ individuals who are just coming up and out and in need of support.

It might be tricky to keep a gay bar running in this area, he said, but there has to be a way to do it.

"I would definitely drink at the establishment daily if someone opened one," Loverde said. ∆