Grade-school civics books don't list any formal connection between money and power. In the real world, however, fundraising prowess serves as both a stamp of a candidate's legitimacy and a campaign's ticket to controlling a message through advertising. 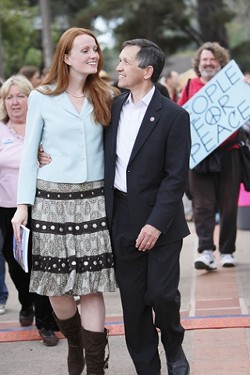 # So which presidential candidates are doing best at harvesting dollars from SLO-area residents?

According to the Federal Election Commission, former New York Mayor Rudy Giuliani is the top fundraiser in the area, having raised $52,600 locally so far.

The numbers include donations from addresses with zip codes that begin with the digits 934. In practice, that spans from Buellton to Cambria and Paso Robles. The list includes donations made up until June. A new report is due next week.

Barack Obama is the top Democratic fundraiser to date, raking in $13,065 in local cash, though the numbers don't include any money he raised in a star-studded fundraiser at Oprah Winfrey's Santa Barbara area home in August. He reportedly raised $3 million in that effort.

Closely behind him locally is former Sen. John Edwards, who's raised $10,941.

Perhaps more interesting, however, is how far behind Hillary Clinton--the top Democrat in the state in terms of both money and polls--is in the race for money locally.

Santa Maria businessman Dave Baskett is one of those who gave to Giuliani. He gave the maximum--$2,300--and organized a small $100-a-plate fundraiser at his house recently, but still he emphasizes that he's a "skinny cat" when it comes to political cash.

Baskett said he supports Giuliani even above some candidates whose views may adhere to his more closely because he likes Giuliani's performance as New York mayor.

He describes himself as a recent convert to the idea of giving campaign cash. Sometimes, he said, it just needs to be done.

"People who get a commitment or a strong view that a particular candidate is better than the others should put a little bit of money where their mouth is," he said. "I'm certainly not a fat cat, but this is important."

If Baskett isn't a fat cat, then Russ Genet definitely isn't. The Cal Poly and Cuesta astronomer recently hosted a get together for Obama supporters, and he's given the candidate money several times. But they've all been $20 donations.

He said he sees shades of a reformer in Obama, and compares him to Eugene McCarthy. Still, if Clinton takes the primary, Genet said he'll happily--if slightly less enthusiastically--back her.

Yet Genet thinks he knows why Clinton hasn't done so well locally.

"Obama is really in step with the intellectual liberals, the thinking liberals it's a sophisticated appeal that goes real well with the college liberals," he said. "Clinton is a blue collar Democrat--that's who she appeals to. There are not many blue collar Democrats in San Luis Obispo County."

"Very few, that I'm aware of, can give the maximum $2,300 contribution," he said. "These are more the grassroots-level donors."

SLO County, in general, leans Republican, and the dollars support that. In 2006, 73 percent of all SLO County donations to federal candidates went to Republican candidates.

Ashbaugh said that if Democrats aren't getting the big dollars, they're seeing excitement in other areas.

"I think if you look at the enthusiasm we're seeing each Thursday evening at Farmers' Market, the number of registrations going on there is really amazing."

When new numbers come out--the newest reports are due Oct. 15--they could well show a completely different picture. The latest numbers, for example, don't reflect any donations to Democrat Dennis Kucinich, who made several campaign stops recently. Before that he'd only gotten $300 from area donors. And one local Republican party staffer noted that Ron Paul has had a booth at the SLO Farmers' Market that has gotten steady attention.

INFOBOX:
The money race: Who's raising the most from Central Coast donors?