Slurp down some sexy oysters and slurp up some sexy music and art fest panache this Saturday, July 9, during the fifth annual Central Coast Oyster & Music Festival at Avila Beach Resort (noon to 8 p.m.; all ages; general admission tickets start at $22 for adults or $10 for kids, and tasting tickets are $32 at centralcoastoysterfestival.com).

This is more than just a food or music festival. As in years past, expect crazy art installations from the likes of SpinCycle and Bamboo DNA, plus performance art by Bijoulette, a troupe of “fully interactive clowny, sexy, sophisticated” dancers; and Fou Fou Ha!, a group of “modern day glam jesters”; Nomadik, purveyors of stilts, puppets, and props; and Zen Arts and their cirque performers and dancers.

Aside from plenty of food and drink to be had, the music lineup this year should keep energy high. Trevor Green starts things off at noon. “Surrounded by five guitars, three didgeridoos, an array of percussion instruments, and decorated in a symbolic ancestral nature, Green’s stage appears to be a musical playground not for the faint of heart,” according to his bio.

Dead Feather Moon takes over at 1:25 p.m., an act whose debut full-length album, Dark Sun, won the 2012 Best Alternative Album award at the San Diego Music awards. They get consistent play on the excellent 91X alternative radio station, which says a lot about this band. 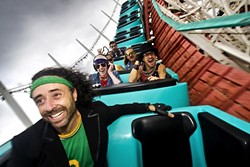 Things will really heat up at 4:40 p.m. when Vokab Kompany brings their genre-defying sounds, fronted by vocalists Rob Hurt and Burke Baby and accompanied by their four-piece synth, guitar, bass, and drum band. This is a group that’s also scored two San Diego Music Awards, winning for Best Hip-Hop Album and Best Hip-Hop Performance even though they also play EDM, funk, and rap.

This promises to be a cool day of music, art, food, drink, and community. Shuck yeah!

The Pulse nightclub shooting in Orlando is a stark reminder that as far as the LGBTQ community has come toward fostering respect and acceptance, there’s still work to do, and one way to do that work is to celebrate with your LGBTQ brothers and sisters this weekend, starting Friday, July 8, during two drag shows at the Grange Hall featuring local favorites Tommi Rose and the Playgirls as well as three stars of RuPaul’s Drag Race (6:30 and 9 p.m.; 21-and-older; $20 to $30 tickets available at slopride.com).

The fun continues to Sunday, July 10, from noon to 5:30 p.m., during the 20th annual Pride in the Plaza family friendly event in the SLO Mission Plaza that features Tommi Rose emceeing. Sponsored by GALA, the first entertainer, Maia Sharp, brings her amazing pop and country-tinged songs that have been recorded by the likes of the Dixie Chicks, Bonnie Raitt, Trisha Yearwood, Cher, Keb’ Mo’, Lisa Loeb, Art Garfunkel, and many more.

At 2 p.m., the Cuesta Squares will offer a square dancing demo, and at 2:20 p.m., WASI takes the Pride Stage. This is a really fun, upbeat pop duo that’s been listed as She Wired’s “Top 10 Queer and Female Fronted Bands You Need to Know Right Now.”

An awards presentation begins at 3 p.m., but at 3:15 the fun continues when The Mowgli’s take the Pride Stage. This jangly alt-rock act delivers bouncing, exuberant sounds.

After another 4:15 p.m. presentation, the day’s final act—Kenny Metcalf as Elton & The Early Years Band—hits the Pride Stage at 4:45 to perform early material by the great Elton John. It’s a super fun show filled with costumes and all Elton’s early hits.

Visit slopride.com to learn about other events this week, and be part of the solution by showing all members of our community that they’re welcomed and valued. 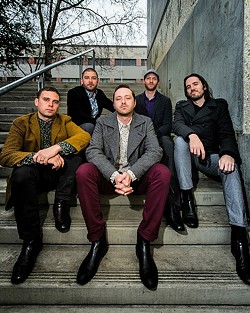 I’ve yet to check out the re-opened SLO Brew on Higuera Street, but so far I’ve been pretty impressed with their musical lineup. This week they’re at it again starting on Thursday, July 7 (8:30 p.m.; 18-and-older; $12 general admission or $25 VIP balcony seating available at slobrew.com), with two great dance bands. Cayucos-based funk act Captain Nasty will open the show. These guys won Best Live Performance at the New Times Music Awards. Monophonics will headline the show, delivering their self-described “psychedelic soul” as they channel the likes of Funkadelic, Sly and The Family Stone, and The Temptations.

Austin-based singer-songwriter Joe Pug plays Friday, July 9 (9 p.m.; 18-and-older; $13 at slobrew.com). He’s the classic “come out of nowhere” star, who dropped out of college to work as a carpenter but started self-producing CDs on the side, which he gave away. A fan based developed, plus a series of sold-out shows, and then a record deal with Nashville indie label Lightning Rod Records. Now he’s a festival favorite and a touring juggernaut!

On Sunday, July 10, Good Medicine Presents and Opolo Vineyards host Inga Swearingen & Guy Budd from 5 to 7 p.m. Budd is a monster guitar player with a low rumble of a voice, and Swearingen is one of the area’s most gifted vocalists and an award-winning songwriter who’s appeared on the A Prairie Home Companion live radio show on several occasions.

Stanley Stern may be best known as a concert promoter for events like Los Osos’ Boatzart, but he’s also produced five music CDs including tango and ragtime discs. 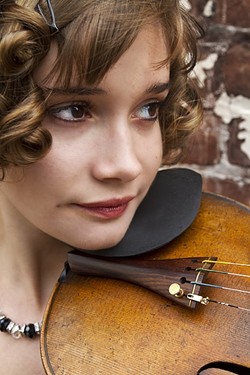 “Last week I completed a CD of piano music written by Eugenie Rochelle, which I rearranged for piano and two violins,” Stern explained in an email. “I have been lucky to have worked with Paul Severtson and two remarkable violinists from Cal Poly music program, Pamela Shuffler and Mario Ojeda.”

This Friday, July 8, the fruits of Stern’s labors will be on display when he, Shuffler, and Ojeda perform the songs in the Edward Jones offices (1236 J Los Osos Valley Road, in Los Osos; 7 p.m., $20 suggested donation), where a collection of Stern’s artwork is also on display. The evening will also include some storytelling.

“When I taught art, it was not enough just to create a picture,” Stern added. “The artist had to also create a story about the art work. I have put up about 75 art works, and that means a whole bunch of stories. Here’s one example: The Los Osos Bear, Mascot of the Baywood Navy, Motto—We never sail in water deeper than we can stand in! No seas above our knees.”

Carol Stern will also play a few tunes on her new Appalachian dulcimer. Come on down for a truly interesting evening.

Stand-up comic, actor, and country music artist Rodney Carrington is going to hit you with the truth this Friday, July 8, at Madonna Inn Expo Center (8 p.m.; $47 general admission tickets at vallitix.com, or if you’re feeling spendy, get a $182 VIP package with one premium reserved ticket, a meet-and-greet with Rodney Carrington immediately after the show, a picture with Rodney Carrington (bring your camera), and a VIP laminate.)

Carrington’s Here Comes The Truth tour mixes music and comedy, and demonstrates why this multi-talented performer has recorded eight major record label comedy albums, which have sold millions of copies. Morning Wood has been certified gold and Greatest Hits has been certified platinum by the RIAA. He’s also starred in his own TV sitcom Rodney, and he also co-wrote and co-starred with Toby Keith in the feature film Beer for My Horses.

Beca brings her electro pop to Frog and Peach this Friday, July 9 (10 p.m.; 21-and-older; free), as part of her Western tour to support her new album Ecliptic, which generated music videos for “Bayonet” and “Meteor.” Her ethereal sound features gliding synths, pumping bass, and silky vocals.

The Danielle De Cosmo Trio brings their folk-rock sounds to Sculpterra Winery this Sunday, July 10 (1 p.m.; all ages; pass the hat), headlining the Songwriters at Play showcase. Hailing from Florida, De Cosmo has been compared to the big-voiced Susan Tedeschi. Other performers include Sara Noelle and Ken McMeans. Visit songwritersatplay.com for a complete schedule of their showcases.

This Sunday, July 10, hear meditative jazz piano and song by John Knutson and His Trio as they offer a spiritual message of hope and reassurance at 4 p.m. in the historic sanctuary of San Luis Obispo First Presbyterian Church. The concert is free but donations are appreciated. A reception follows.

I’m getting excited about the upcoming Ladyfest II on Aug. 6 at the Grange Hall, but if you need a dose of some great female punk rock, head to Frog and Peach this Wednesday, July 13 (9 p.m.; 21-and-older; free), to see San Francisco’s Queen Crescent, “Super badass chicks I’ve been begging for months to come grace SLO with their tunage,” according to Hot Tina member Shea Kelly. The three-band event also features Hot Tina and the Pink Floyd-ish Fluff.