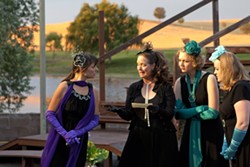 Shakespeare’s early comedy Love’s Labour’s Lost isn’t one of his most accessible. The play is particularly heavy in era-specific references that—shrouded in the Bard’s lush, complex language—often confound modern audiences, making it one of the Bard’s lesser-produced plays. But a current Central Coast Shakespeare Festival production of Love’s Labour’s Lost—set outdoors at the River Oaks Amphitheatre in Paso—has found a few subtle ways to rectify this. The script has been trimmed here and there for the sake of clarity, and the actors have apparently been given free rein to deliver their lines with modern attitude. If you’ve ever giggled over “the blind bow-boy’s butt shaft” in high school English, you’ll appreciate what directors Zoe Saba and Cindy Totten are doing here.*

The story of Love’s Labour’s—or Labor’s, as this production opts to spell it; it’s all about accessibility!—centers on an oath taken by Ferdinand, King of Navarre (played here by Cory Schonauer) and his courtiers Berowne (Matthew Hanson) and Dumaine (Charles Hayek). The men swear off of women for three years, in order to devote themselves to academic pursuits. The opening scene sets the jocular tone of this production, with Schonauer, Hanson, and Hayek earning plenty of laughs as they argue over, and eventually acquiesce to, this stringent and never-terribly-convincing resolution.

But no sooner have the men sealed their oaths with a hearty round of huzzahs than, lo! The princess of France (Heather MacLeod-Schultz) turns up, looking all doe-eyed and hot, wearing a perpetual expression of, “who … moi?”

Naturally, the princess is flanked by her ladies-in-waiting, Rosaline (Claire Harlan), Katharine (Angela Hutt-Chamberlin), and Boyet (Janet Stipicevich)—who, in comparison to the other two, plays less the part of the coquette and more that of the faithful messenger, often arriving flushed with some new tidings.

Given the new oath to which the king and his courtiers are sworn, the women are informed, to much shock and swooning, that they will not be welcomed within the king’s walls. Instead, they are to make camp in the field, “like one that comes here to besiege his court,” Boyet sniffs. (“The field!?” the other women collectively squeal.)

Already, however, we witness the men’s defenses weakening in the face of the ladies’ womanly charms. But another ill-advised love story is brewing, and it has to do with the Spaniard Don Adriano de Armado (David Anthony Hance at his pompous, comedic best), the country wench Jacquenetta (Krystal Kirk), and the fool Costard (a brilliant Sean Peters). Armado explains that he has caught Costard and Jacquenetta getting it on in the king’s park, in a letter to the king filled with blustering, over-wrought prose. (This, by way of example, is Armado’s version of getting to the point: “I did encounter that obscene and preposterous event, that draweth from my snow-white pen the ebon-coloured ink … .”)

The king’s reading of Armado’s letter is made all the funnier when Armado himself chimes in from across the stage, like those movie voiceovers, speaking along with the king in a ridiculous Spanish accent.

For his crimes, Costard is to be punished by Armado—who also will take Jacquenetta for himself, because, incidentally, he’s in love with her too. Costard’s attempts to talk his way out of punishment and Armado’s lovelorn, bombastic babbling provide a hilarious subplot that runs parallel to the main storyline—that is, until the two narratives crash into one another in the third act, in a flurry of misdirected love letters, disguises, and broken vows.

I fear I have not yet conveyed just how witty this production is, nor how wonderfully hammy many of the lead performances are. It’s hard to articulate on paper just how MacLeod-Shultz, as the princess, says, “Was that the king, that spurred his horse so hard against the steep uprising of the hill?” and makes the words sound like something out of a dirty French novel; or how Peters, as Costard, listens offhandedly to a parade of Shakespearean insults read aloud from Armado’s letter, discovers with a shock that they’re directed at himself, and proceeds to react with growing indignation—fitting this entire emotional journey into a single brief moment.

Peters and Hance appear to be among the most physically committed to their roles, perhaps because these parts are pure comedy—in contrast to the leads, whose struggles are afforded more weight. Peters plies his lanky form into all sorts of flighty and rather effeminate gestures, while Hance’s Armando often enters the stage by throwing his stockier build into a ridiculous little jig, accompanied by his page, Moth (Cordelia Roberts).

Some actors appear more comfortable with Shakespeare’s language than others, and here SSCF veterans like Hance Armando and Stipicevich have the upper hand. More importantly, though, the cast is clearly up for fun and expects you to be, too: A courtier even nicked some of an audience member’s crackers in a moment of improv on the show’s opening night,

The original version of the play involves several more characters, who have been cut from this particular production. The original script, for example, has a third courtier and a fourth lady-in-waiting, as well as two scholars prone to chatting in Latin, but those parts were axed in Totten and Saba’s efforts to simplify the material.

The costuming here has been pared down as well, with main characters attired in simple, modern formalwear, the kind of thing people refer to as “timeless”: suits for Navarre and his men; black cocktail dresses for the princess and her ladies. Supporting characters, however, are dressed in the Elizabethan styles befitting the period. Armado’s resplendent plumage makes him look curiously like a rooster.

Shakespeare was something of a formula writer, and had no problem taking a situation or idea that worked in one play and applying it to another. In the directors’ notes, Totten and Saba point to the clear parallels between the witty banter of Berowne and Rosaline and the gleeful sparring of Beatrice and Benedick in Much Ado About Nothing. Love’s Labour’s also incorporates the play-within-a-play concept used later in A Midsummer Night’s Dream.

The ending of Love’s Labour’s is something of a buzzkill, though purposefully so. The conclusion of this early play displays a far more realistic attitude toward love and relationships than Shakespeare’s later comedies, in which marriage is equated to an eternal wellspring of happiness. Here, however, this is not necessarily so, and for that reason, the play’s unexpected ending satisfies.

* From Romeo and Juliet: “Alas, poor Romeo! He is already dead, stabbed with a white wench’s black eye, shot through the ear with a love song, the very pin of his heart cleft with the blind bow-boy’s butt shaft.” BUTT SHAFT.

Arts Editor Anna Weltner does not bite her thumb at you, sir, but she bites her thumb. Send Shakespearean insults to aweltner@newtimesslo.com.

To see additional images check out our gallery