The Charlie Hunter Trio will bring their innovative jazz sounds to the SLO Grange Hall on Dec. 5th

Charlie Hunter has never followed expectations. When he wanted a guitar sound that could also blend in bass note sounds—think Joe Pass or Tuck Andress of Tuck & Patti—he had a seven-string guitar made, which he played on his 1993 debut. 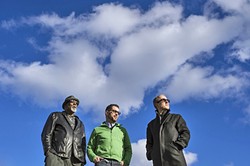 In short, Hunter is a singular musician with a penchant for unconventional approaches to a wide array of genres, which is on full display in Let the Bells Ring On, his newest album and first recording as a trio with long-time collaborators Curtis Fowlkes and Bobby Previte, all three of whom play the SLO Grange Hall this Saturday, Dec. 5 (8 p.m.; all ages; $20 at ticketfly.com), as the Charlie Hunter Trio.

Released on the seven-string guitarist’s own label, Charlie Hunter Music, the record is billed as “gritty, greasy, and downright celebratory” and “features 10 Hunter original tunes designed for the trio’s singular, deep-pocket sound.”

Hunter’s collaborators are well known in the jazz world, having been essential players in the ’70s NYC “downtown” jazz scene. “Fowlkes is a charter member of the Lounge Lizards and the Jazz Passengers, while Previte has over 200-plus original compositions and 25 albums to his name,” according to press materials.

For the last several years, Hunter has mainly worked as a duo with drummer Scott Amendola, but with Previte on the kit, Hunter was interested in exploring a different sound.

“He’s probably known as a composer more than anything else,” Hunter said. “But he’s always been one of my favorite drummers. He came up in the 1960s, and he has the beat. You have to have lived it to have that feel. Because of his composer’s mind, we can play the simplest groove and it becomes something really exciting and compositional.”

Fowlkes, a trombonist, first worked with Hunter on his 2003 quintet album Right Now Move. “Conceptually, I’ve been doing a duo thing with Scott that I love, but I wanted to have that third voice,” Hunter said. “I wanted somebody with a vibe who understands free improv and Al Green and Frank Sinatra and Sam Cooke. I wanted someone who can sing on their horn. I needed Curtis.”

Their album opens with a deep, low, chugging horn sound driven by a tribal backbeat and textured by Hunter’s surprisingly dissonant guitar sounds. It’s wild and mesmerizing and primal … until it breaks into a melodic head-bobbing groove. It’s the sound of three masters stretching the boundaries, and it’s the kind of thing you only witness in experimental jazz circles. Jazz fans will not want to miss this show, brought to you by Numbskull and Good Medicine Presents.

If you want a taste before you commit, tune into KCBX 90.1 FM at 1 p.m. on Saturday, Dec. 5, for Rick Mathews’ excellent show Freedom Jazz Dance, on which he’ll interview Hunter live on air.

“Charlie Hunter, one of the most innovative jazz guitarists of the last 20 years, will visit KCBX studios for an interview on Freedom Jazz Dance on Saturday, Dec. 5, around 1 p.m.,” wrote Mathews. “Hunter will join me to discuss his band, their latest tour, and new album Let The Bells Ring On. He’s released over 30 albums since the early 1990s, with a wide range of sounds, instrumentations, and styles, from jazz standards to hip-hop, with many stops in-between. His music exemplifies the best of chops, passion, creativity, and FUN! Tune in to Freedom Jazz Dance, from noon to 2 p.m., Saturday on KCBX.”

If you go back a couple of decades in the SLO music scene, you might remember a band called Rhythm Akimbo, an upbeat, kinetic, dance pop octet comprised of Cal Poly students. They had a great run from about 1986 to 1992, but eventually college kids graduate—even the creative musicians types—and head out into the world. 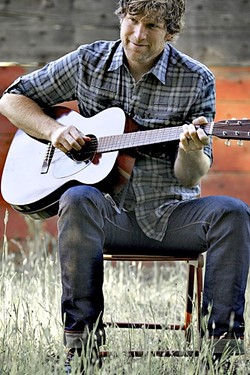 I don’t know what happened to most of the members. Robynn Ragland returned to the Midwest and had a pretty good solo career in the mid-2000s, but until recently she was the only one I kept track of. Now Alec Lytle has popped back up on my radar. The singer-songwriter has just released a new Americana album The End of Ours on Four Aces Records, and this Saturday, Dec. 5, Alec Lytle & Them Rounders will play Linnaea’s Café (8 p.m.; all ages; free).

Featuring Lytle on guitar and lead vocals, Jamie King on upright bass, Dan Newitt on mandolin and harmony singing, and Benny Estes on percussion and harmony singing, the quartet’s new album is filled with gorgeous compositions, beautifully arranged, and with haunting and poignant lyrics. It’s a huge departure for the sounds of Rhythm Akimbo, and it proves Lytle is more than a sideman. He’s played upright bass and provided harmony vocals for others. Now this show is all his.

“I wrote most of the songs on this record during the four years I lived in a yurt that I built in the Santa Cruz Mountains,” Lytle said in press materials. “The little place had only a pot-belly stove for heat, and I spent most of my nights there alone with the Pacific coastal fog collecting in the redwood trees overhead, making a racket dripping onto the canvas roof ... it was a great place to think and to write.”

“I’ve been lucky enough to work with some of the greatest musicians over the past few years, and even more fortunate that some of them were able to play on my record,” Lytle said regarding the collaborative recording effort. “The core group played together with me singing and playing live, so most of what you hear on the record is just us all playing as a band in Clearmountain’s big studio space. Live vocals, live everything ... and since we were all playing acoustic, you can definitely feel some sort of organic resonant interplay between all of the instruments.”

It’s been a long time coming, but welcome back, Alec.

No rest for the wicked

I love weeks like this at SLO Brew, when there’s wall-to-wall music, when every night you can head downtown and find another night of diverse music awaiting you.

This week, Numbskull and Good Medicine Presents will have you hopping every night but Monday. Things kick off with Two Gallants on Thursday, Dec. 3 (8 p.m.; all ages; $15 presale or $17 at the door). The Bay Area guitar-and-drum duo features singer-guitarist Adam Stephens, whose raw and expressive voice is pretty irresistible, and drummer-backing singer Tyson Vogel. Emotionally charged and sparsely arranged, these guys deliver a lot of sound for two players. Goodnight Texas opens.

Hip-hop favorite Andre Nickatina returns on Friday, Dec. 4 (7:30 p.m.; all ages; $23 presale or $25 at the door). In tracks like “N Yo Eyes,” he sings about his desire for and shabby treatment of a prostitute. He once purportedly tackled a marcher in San Francisco’s Gay Pride Parade, which he brags about. He’s got lots of fans. I’m not one of them. He seems pretty douche-y.

If you want less misogynistic and homophobic rap, it’s time for the return of How The Grouch Stole Christmas featuring Grouch & Eligh (of Living Legends), with Luck & Lana on Saturday, Dec. 5 (7:30 p.m.; all ages; $20 presale or $23 at the door). Socially conscious and politically charged, they use their talents to point out injustice. Me likey!

The last time I saw Lukas Nelson & the Promise of the Real, they were backing Neil Young. I’m pretty sure Young won’t be there when they return to SLO Brew this Sunday, Dec. 6 (7 p.m.; all ages; $15 presale or $18 at the door), but you will hear Nelson’s all American rock ’n’ roll. They’ll no doubt present new songs from their upcoming fifth record, Something Real, due in February. “Something Real documents the trail blazed by this hard-driving ensemble in its recent past,” according to press materials. “Most of all, it captures them in all their current glory as songwriters, performers, and progenitors of the style they characterize as ‘cowboy hippie surf rock.’” Insects vs. Robots will open.

Rest up on Monday, because you’ll want to head out on Tuesday, Dec. 8, for country artist Kevin Fowler (7:30 p.m.; all ages; $14 presale or $16 at the door). He calls his music, “country with a bad attitude. It’s country with an edge. It’s just beer-drinkin’, hell-raisin’, good-time music.”

Finish out your week with one of the best live party bands ever, The California Honeydrops, playing Wednesday, Dec. 9 (7:30 p.m.; 21-and-older; $20 presale or $25 at the door). The band has a great new record out, A River’s Invitation, delivering their patented mix of R&B, funk, Southern soul, Delta blues, New Orleans second-line, gospel, and psychedelic groove. It’s feel-good music—positively joyous! “When It Was Wrong” sounds like an old school Motown doo-wop group. “Lead Me Home” is a smoldering slow-burning soul track devoid of vocals save a subtle “woohoos” and some “love sweet love lead me homes.” It seems like there’s nothing this band can’t do!

Co-produced by Big, Big SLO, the afternoon will “celebrate the station’s launch and honor the founding musicians who submitted their recordings for radio play and helped make this vision come to fruition,” according to Golden. “We’re likening our service to a Pandora-style radio station, exclusively featuring local talent on the California Central Coast. We’ll be playing pre-recorded tracks, in-studio interviews, and mini-concerts as well as live radio coverage of concerts.”

Zongo All-Stars will play the last hour of the party. For more info or to download the app, visit centralcoastlive.com.

The SLO Blues Society presents killer blues guitarist and singer Carolyn Wonderland on Saturday, Dec. 5, in the SLO Vets Hall (8 p.m.; 21-and-older; $25 at the door). Back Bay Betty will open.